Half of voters say Keir Starmer has boosted their view of Labour as his leadership prepares to mark its first 100 days tomorrow.

In results that will set alarm bells ringing in Downing Street, a poll found Sir Keir is seen as preferable to Boris Johnson on a range of measures – from competence to ability to negotiate with the EU.

Some 52 per cent can imagine him as PM – including a third of Tory voters – while 49 per cent say their opinion of the party has become more favourable since he took over from Jeremy Corbyn.

However, the Opinium survey for the Observer also highlighted how far Labour still has to go to recover after its election catastrophe in December. 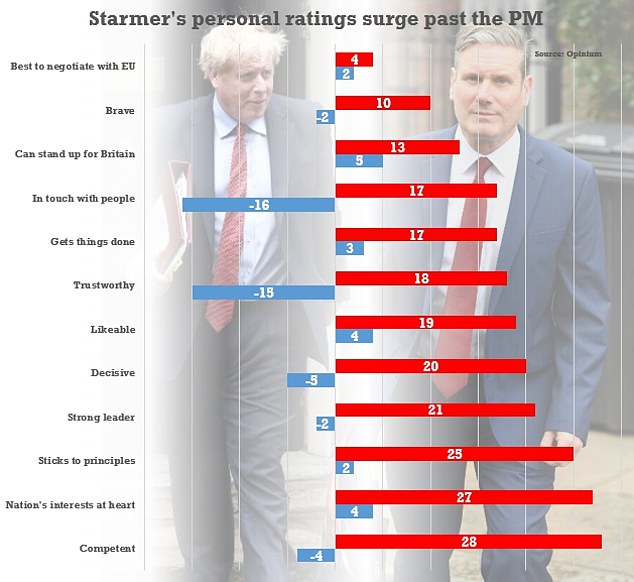 In results that will set alarm bells ringing in Downing Street, an Opinium poll found Sir Keir is seen as preferable to Boris Johnson on a range of measures – from competence to ability to negotiate with the EU

A former head of MI6 has said he is ‘certainly pleased that Corbyn is gone’, as he welcomed Sir Keir Starmer’s election as Labour leader.

During the 2019 general election campaign, Sir Richard Dearlove – who led the secret service between 1999 and 2004 – said then party leader Jeremy Corbyn represented a ‘present danger to our country’.

Speaking to the BBC’s The Andrew Marr Show on Sunday, Sir Richard said: ‘I’m certainly pleased that Corbyn is gone.

‘I think my strong personal views about Corbyn as a potential prime minister are well known and well understood.

‘It’s a relief that he’s no longer leader of the Labour Party.

‘On Keir Starmer, he seems to me to be a Labour leader of the type that we would expect and personally I feel quite content and happy with the fact that he’s now leading the Labour Party.’

Just 36 per cent believe the party is ready to return to government now, and among the ‘Red Wall’ former heartlands that delivered Mr Johnson’s historic victory 60 per cent  think the opposite. On headline voting intention the Conservatives had a four-point advantage.

Tory MPs have been increasingly concerned at the solid start made by Sir Keir since he succeeded the hapless Mr Corbyn.

He has restored links with the Jewish community, including by sacking left-winger Rebecca Long-Bailey for retweeting an interview with an actress featuring an ‘anti-Semitic conspiracy theory’.

And Sir Keir has held his own against Mr Johnson at PMQs, landing a number of bruising blows in the Commons, although the premier has upped his game recently.

The research asked people a series of questions about the leaders, and gave them a net rating by subtracting the number of negative responses from the supportive ones.

Strikingly on competence, Sir Keir scored a net positive result of 28 against -4 for Mr Johnson, after a series of government missteps during the coronavirus crisis.

The premier was rated minus two for strong leadership, while his Labour opponent was on plus 21.

Sir Keir even scored better when people were asked who they would prefer to negotiate with the EU.

Mr Johnson, whose election mantra was ‘Get Brexit Done’ recorded a net rating of plus two compared to plus four for Sir Keir.

Adam Drummond, head of political polling at Opinium, said: ‘This week’s results highlight how far Labour has come in Keir Starmer’s first 100 days but also how far they would still have to go to have a chance of winning power.

‘The Labour leader is seen as a potential prime minister by 52 per cent of voters and 49 per cent say that he has made their perception of Labour more positive, versus 29 per cent for Jeremy Corbyn at this point in his leadership.

‘However, that far fewer believe Labour is ready for government and this is particularly the case in seats Labour lost in 2019.

‘This speaks to the central question of Starmer’s leadership so far: do the public see him as a potential winner in 2024 or are his strong ratings a more temporary phenomenon and down to the public seeking a sober, reassuring figure at a time of crisis?’

Ethel the runaway emu is found! Errant bird at large has a new home