London: Things don’t usually turn out so well when members of the royal family sit down for tell-all television interviews.

The most recent – Prince Andrew’s 2019 interrogation by BBC journalist Emily Maitlis at the height of the Jeffrey Epstein sex trafficking scandal – proved a career-ending trainwreck.

In a 1994 documentary, Prince Charles stoked public wrath by admitting he’d been unfaithful to Princess Diana. The following year, 23 million people in Britain watched as Diana declared “there were three of us in this marriage”. That Panorama interview – now the subject of an investigation over claims the journalist Martin Bashir tricked Diana into participating – triggered formal divorce proceedings. 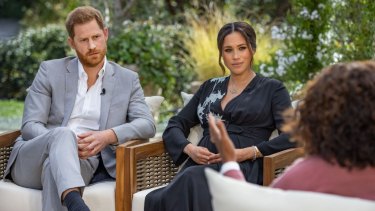 The Duke and Duchess of Sussex talk with Oprah Winfrey.

Asked how Buckingham Palace will feel about Meghan speaking “her truth”, the former Suits actress tells Winfrey: “I don’t know how they could expect that after all of this time we would still just be silent if there is an active role that The Firm is playing in perpetuating falsehoods about us.”

Will the interview turn hearts and minds in their favour? In Britain, probably not. Because here’s another “truth”: after the raging success of their 2018 wedding, the couple are now deeply unpopular figures at home.

YouGov tracks public sentiment towards key members of the family and the polling firm’s results show that Meghan has sunk from her 2018 and 2019 highs. Some 53 per cent of people now have a negative opinion of her and 39 per cent a positive one. By contrast, 74 per cent have a favourable opinion of Catherine, the Duchess of Cambridge. Camilla – once one of the most controversial women in Britain – also has more favourable ratings than Meghan.

In another recent YouGov poll, 49 per cent said Harry should be removed from his place in the line of succession. Only three in every 10 people said he definitely shouldn’t.

The timing of their tell-all is also hugely awkward – 99-year-old Prince Philip is seriously ill in a London hospital. The coronavirus pandemic has claimed at least 125,000 lives in the United Kingdom and thrown millions out of their jobs. The optics of two young royals who rode out the pandemic in a $19.3 million California mansion then talking about their own woes are far from good. 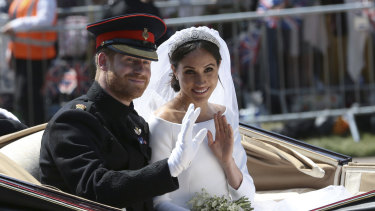 Public sentiment has shifted strongly against Harry and Meghan since their wedding in May 2018.Credit:AP

Rebuilding their image in Britain is not the aim of the interview, though: the intended audience is 330 million Americans and the highly lucrative opportunities that await in their new home. Harry and Meghan have already stitched up a multi-year deal with streaming giant Netflix – which some reports say could be worth more than $100 million – and a lucrative partnership with Spotify. Americans won’t be able to get enough of it.

Sunday’s interview is more an exercise in brand-building than brand repair. And as much an introduction to America as it is a goodbye to the United Kingdom.