London: Amir Tawdrows and his wife and two children were granted visas to move to Australia permanently in February last year.

His was a Skilled Regional (Provisional) visa (subclass 489) – a work permit designed to specifically lure talent from overseas to Australia’s regional areas. His application was sponsored by the South Australian government and supported by Dan Tehan, minister for trade, tourism and investment, and a member of Prime Minister Scott Morrison’s cabinet. 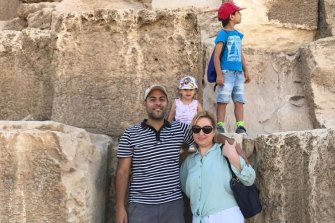 Tawdrows and his wife quit their jobs, sold their assets and were scheduled to move their family to Australia in April that year, when they hoped to begin the process of becoming permanent residents and then Australian citizens.

He has been offered four jobs already because he is a pharmacist, a profession in short supply, especially in regional Australia.

But the pandemic has trapped the family overseas, given international borders have been closed to foreigners, even to visa holders, since late March 2020. It has deprived the family of its new home and Australians of vitally needed pharmacists.

“We are not asking to enter right now, everyone is understanding of the pandemic situation,” he said, during a telephone interview from Egypt.

But with the borders not due to begin to open until at least mid-2022, the family can no longer afford to be so patient.

By then they will have lost two years of their four-year visas – this is critical because to qualify as permanent residents they need to have to spent two years living in the specified regional area.

And the $15,000 in visa and paperwork fees they’ve spent will be lost.

Tawdrows had to sit exams to be recognised as a pharmacist in Australia. He passed that test but has until November 2021 to enter the country and register with the Australian Health Practitioner Regulation Agency.

He said he could feel their future slipping away.

He has a simple request.

“We would like to ask the government to secure our permanent residency pathway or to prolong our visa by the same period of time [lost] since the start of the border ban in March 2020.”

A search on seek.com.au shows more than 2000 current job advertisements in the pharmaceutical sector. Online job ads currently number 245,400, a 12-year high according to the National Skills Commission’s May 2021 Internet Vacancy Index. 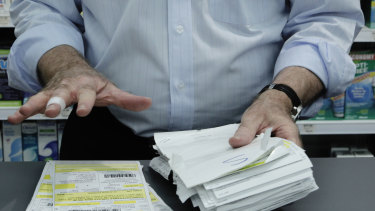 There is a shortage of pharmacists in Australia, especially in regional towns.Credit:Michele Mossop

Tawdrows is one of at least 8000 skilled migrants with visas but locked out of the country. Riad Abdallah who represents the group Stranded Skilled Migrants of Regional Australia says they just want a fair go.

“We would like to ask for a fair chance which would allow us to be eligible for permanent residence, as our visas allowed me prior to disruptions caused by COVID-19,” he said.

Minister for Immigration Alex Hawke was contacted for comment. The Department of Home Affairs said it had introduced concessions for some skilled migrants but these only applied to those already in the country.

While highly skilled workers are anxiously waiting to be let in, employers are crying out for the government to let them open the door. 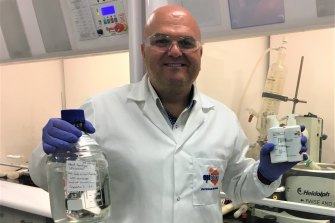 One of his company’s most recent achievements was creating a drug, in partnership with ASX-listed PYC Therapeutics, to stop people from going blind from Retinitis Pigmentosa.

He says a heightened appreciation of research and development in his field, as a result of the pandemic, has seen his business flourish.

But he says Australia’s border restrictions are making it impossible to fill those positions with the best candidates because his talent pool is restricted to Australians already in the country.

He has received 98 applications for one position and more than half were from overseas.

“Our best candidates are based in New York and Germany, for example, so we put them on hold and go for another candidate that may not be the preferred option sooner rather than later, because we’ve got a sense of urgency around securing these roles, because we’ve got clients screaming out.

“If we don’t get these people we run the risk of losing these contracts, their combined worth is in the millions.”

He says one solution would be for the government to allow businesses to pay for and manage quarantine for their workers, in addition to the caps on the number of people who can enter the country each week.

“We’re already paying for relocation costs now, so to be the ‘owner’ of that particular individual based on COVID and making sure that they adhere to those rules and regulations – that would be fine with us.”

The Prime Minister has previously floated the idea of corporate-paid and managed quarantine as one way of freeing up hotel quarantine capacity for the more than 35,000 Australian citizens stuck abroad.

Exemptions have been granted to the film and elite sports sectors for movie stars and tennis players to quarantine in privately-funded accommodation.

However, Employment and Science Minister Stuart Robert has suggested the government is in no hurry to alleviate the shortages, saying last week the border closure would give the country time to focus on Australian workers.

“We don’t have opportunities to bring skilled migrants in because of those limitations, which is fine: great opportunity now to focus on Australians,” the minister told Sky News Australia.

Get a note direct from our foreign correspondents on what’s making headlines around the world. Sign up for the weekly What in the World newsletter here.