This is the heart-stopping moment a quick-thinking father saves the life of his four-year-old son as an out of control car careens towards them.

The pair had been food shopping when the incident took place on a busy street in St. Petersburg, Russia, on Wednesday April 14.

In the footage, captured on CCTV, the boy can be seen leaving the grocery store and standing on the pavement ahead of his father who is following seconds behind.

Just a moment later a car is seen losing control on the other side of the road as it appears to get stuck accelerating in reverse gear whilst trying to park.

To avoid colliding with the cars driving up the road the driver turns to drive onto the pavement, putting the young child and his father directly into its path.

Thankfully the father is seen looking up in the direction of the black SUV just moments before it would have hit them.

The father’s reflexes kick in as he swoops down picking up his son and running to safety with a split second to spare.

After getting a safe distance away the pair look back to see the car has smashed into the building in the exact spot they had been standing. 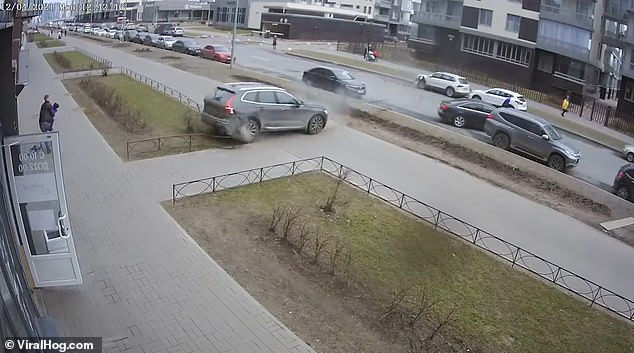 The pair had been shopping for groceries when the incident took place on a busy street in St. Petersburg, Russia, on Wednesday April 14 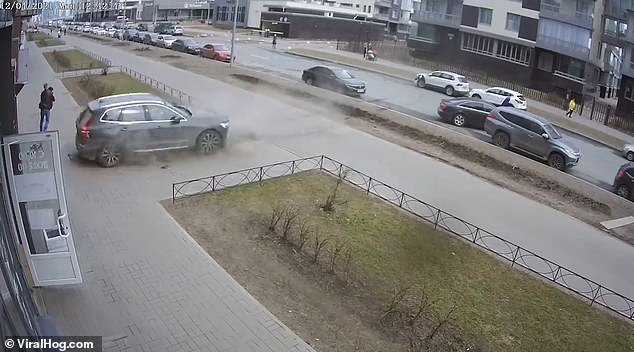 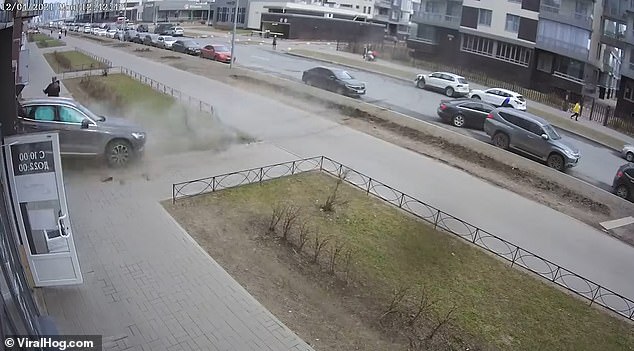 The car’s airbags are deployed in the crash as bystanders rush to help the driver inside.

A shocked shop assistant is seen coming out of the nearby grocery storer after hearing the crash.

It is not known if anyone was injured in the incident.

The footage which was shared widely on social media where the father was hailed as a hero for saving the boy.

Whilst another said: ‘The question is: why do cars go in reverse with such speed?’

Brit warship ‘fired at by Russia' could destroy anything its path so back off Putin, warns rear admiral