Home » World News » ‘His doctors are happy’: Premier ‘on track’ to return to work in June

Premier Daniel Andrews is doing well in his recovery and walking for longer distances, according to his deputy James Merlino.

The Acting Premier, who has been standing in for Mr Andrews since early March when he injured his back, said the Premier was on track to return in June as has been previously flagged. 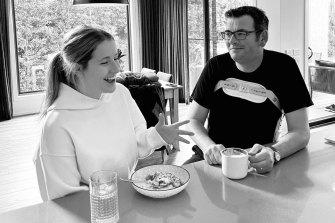 Daniel Andrews at home in April.

“He’s up and about,” Mr Merlino said. “His doctors are happy with his progress. Still a little way to go, but he’s doing well.

“I think we’re on track for a June return.”

Mr Merlino said the Premier was walking greater distances than he had been last month.

He said he had been in regular contact with Mr Andrews and planned to speak with him on the telephone later on Thursday.

Delighted family are back together with their stolen Labradors