Save articles for later

Add articles to your saved list and come back to them any time.

Joe Biden's victory over Donald Trump in the US presidential election was celebrated with tears, laughter and the popping of sparkling wine corks by American citizens living in Melbourne.

A group of American Biden supporters gathered on the rooftop of the Arcadia Hotel in South Yarra on Sunday to toast the win after days of waiting for the final result. 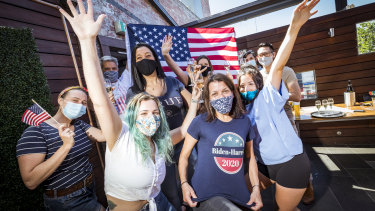 The race was eventually called by the US TV networks just before 3.30am on Sunday (AEDT), prompting a wave of relief among Democrat supporters.

"I woke up at 4.30am and saw that I had all these messages," said Lori Perry, 56, a former Republican voter from North Carolina who was wearing a "Biden/Harris" T-shirt.

"I probably counted my chickens today. Before that I could not be optimistic because I remembered how it felt in 2016 and I could not let myself feel that way again. I don't think there's any way it will be taken away."

It was a different story than on Wednesday, when early results showed that Trump had performed better than expected and was still a chance of being re-elected.

But with the later ballots heavily favouring Biden, it became clear that it was only a matter of time until Trump would be forced out of office. Many wept as Biden and Kamala Harris, the Vice- President-elect, gave their victory speeches.

"It was an absolute relief. Exactly the opposite of what I felt on election day, which was sheer terror that he was going to get back in," said Ms Perry.

"I just feel like we need integrity, we need unity and I think that Biden is going to do that. I'm incredibly proud of Kamala, I think that will take my girl students to the next level."

Hannah DiCocco, 32, was also excited about Harris becoming the first woman and person of colour to be elected vice president.

"You can't see my smiling through my mask," she said. "It's amazing, it's all been white males and she's a woman of colour and that's awesome." 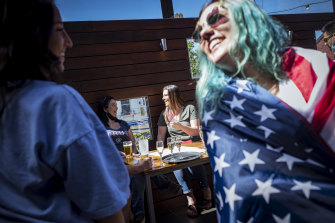 Ms DiCocco grew up in Broomall, near Philadelphia, and watched closely as the votes were counted in her home state of Pennsylvania, which was crucial to the final result.

"I was really uncertain about Pennsylvania for a while, to be honest. Having family on both sides, having friends on both sides," she said.

"When I saw it was up to Pennsylvania, I had my fingers crossed."

When the state turned blue, delivering Biden the presidency, Ms DiCocco said she sang a little patriotic song in triumph.

However, she thinks there is lots of work to be done to heal America after four chaotic years of Trump, particularly in terms of racial justice.

"It is still a moment of celebration, it's something," she said.

David Duong, from Alexandria in Virginia, not far from Washington D.C., said he felt like it was OK to be patriotic again about his home country.

"When I moved here, I didn't think it was the right thing to fly the American flag because it represented something different," the 30-year-old said.

"This morning I was looking up American flags and wondering how big should I buy to hang outside my house."

Understand the election result and its aftermath with expert analysis from US correspondent Matthew Knott. Sign up to The Sydney Morning Herald‘s newsletter here, The Age‘s here, Brisbane Times‘ here and WAtoday‘s here.

In the age of COVID, trying to avoid all risk has its downside

Slaughtered one by one as girl, 10, lay dead next to her dolly – how axe maniac took family hostage in 3 days of terror – The Sun