Jakarta: Indonesia has confirmed its first two cases of coronavirus infections, after weeks of warnings from health experts that the country may not have implemented an adequate testing regime.

Two women, a 64-year-old and her 31-year-old daughter, contracted the virus from a Japanese friend who was visiting them in Depok, a city that is part of greater Jakarta. The pair are now being treated in a hospital in North Jakarta. 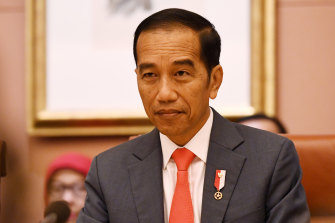 In a statement, President Joko Widodo said the country was ready to handle an outbreak of the virus.

"There are more than 100 hospitals with isolation rooms. We have equipment up to international standards, we have sufficient reagent [the chemicals used in testing for the virus], we have a joint team consist of the TNI [military], the police and civilians handling this case. We also have standard operating procedures similar to existing international standards," he said.

Indonesia had until Monday insisted it had zero cases of infection, even as the virus spread to nearly all of its neighbouring countries – including Malaysia, Singapore, Australia, Thailand and the Philippines – and despite a number of people testing positive to coronavirus after transiting through or holidaying in Indonesia.

Indonesia has tested just 333 people for the virus despite having a population of about 270 million people. Neighbouring countries have conducted thousands of tests on far smaller population groups. 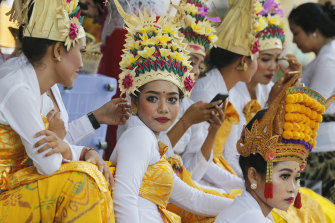 Balinese dancers wearing traditional dress at the Kuningan festival. Indonesia had not previously detected any cases of coronavirus.Credit:AP

Separately, the Jakarta Post reported on Monday that three people – two Singaporeans and one Myanmar national – had tested positive for the virus after travelling to Singapore from Batam, on Indonesia's Riau Island.

Last week, The Sydney Morning Herald and The Age revealed the United States' top diplomat in Indonesia had expressed concerns to Health Minister Terawan Agus Putranto over Indonesia's handling of the coronavirus outbreak, and that the country needed to be testing more widely.

Terawan has repeatedly insisted Indonesia had remained coronavirus-free because of the power of prayer. He attacked The Herald and The Age for revealing that in the days after the outbreak, Indonesia did not intially possess the specific reagents to rapidly test for the virus. The country now has the test.

Health officials in the US state of Washington have confirmed the death of a second person suffering coronavirus amid fears the virus may have been circulating there undetected and infected scores of people over a period of six weeks.

Researchers flagged the potential threat the virus had spread after conducting genetic sequencing of two virus samples: one a patient who travelled to the state from China in mid-January, the other a high school student with no known travel-related exposure to the virus.

Both the victims – one aged in his 50s and the other in his 70s – had underlying health conditions and were being treated in a hospital west of Seattle. The state has only 12 confirmed cases of the virus.

By Monday afternoon the US had only 86 confirmed cases of the virus according to data from the Johns Hopkins University.

The country's surgeon general urged US citizens to stop buying masks, in line with recommendations from the Centres for Disease Control and Prevention.

"They are NOT effective in preventing general public from catching #Coronavirus, but if healthcare providers can't get them to care for sick patients, it puts them and our communities at risk!" he said in a Twitter post.

In Europe, the spread of the virus has resulted in almost 1700 cases in Italy and 130 each in both Germany and France, where the worsening situation forced the closure of the world's most-visited museum.

Workers at the Louvre in Paris refused to open the iconic museum on Sunday over fears visitors could infect staff with COVID-19.

Union leader Christian Galani told the AFP news agency staff had met before the doors opened on Sunday and decided the risk was too severe given the French government had the day before announced a ban on indoor gatherings of 5000 or more people.

"The Louvre is a confined space which welcomes more than 5000 people a day," he said. "There is real concern on the part of staff."

In Italy, the worst-hit country outside of Asia, the government has announced a €3.6 billion ($6.08 billion) stimulus package for businesses affected by a dramatic drop in tourism.

Milan, Venice and Rome have been badly affected amid reports that some hotels have experienced an 80 per cent reduction in bookings for March.

The Australian government has upgraded its travel advice for Italy to urge citizens to reconsider their need to travel to towns isolated by local authorities.

American Airlines has said it will immediately cease all flights to Milan, the capital of Lombardy, until the end of April, citing a lack of demand.

In Iran, the number of people infected with the coronavirus jumped 65 per cent to 978 on Sunday according to official figures – but observers still fear the number of cases there remain massively under-reported.

Britain's Covid-19 R rate rises ABOVE crucial level of one