Home » ‘It didn’t need a redesign’: Iraqis hit out at plan to rebuild Mosul mosque destroyed by IS

The UN’s plan to restore the historic mosque where Islamic State famously declared its caliphate has been labelled a modernist carbuncle, with architects and archaeologists slamming the “Gulf-inspired” cubist redesign in the historic centre of Iraq’s second city.

Iraqi experts say the design, which won an international competition, ignores the city’s unique heritage and question why an Iraqi architect was not chosen for the project.

On Thursday, UNESCO announced it had selected an Egyptian firm to rebuild Al-Nouri mosque as part of a project to restore parts of Mosul’s Old City, which was heavily damaged during its occupation by Islamic State militants. The UAE has pledged $US50 million towards restoring the mosque. 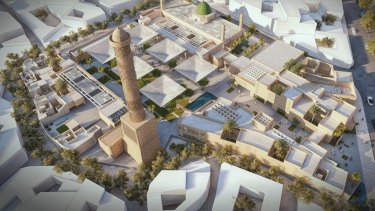 An artist rendering of the rebuilt Al-Nouri mosque in Mosul, Iraq. Locals are not pleased.Credit:UNESCO

Many Mosulawis, as residents of Iraq’s second largest city are known, expected the beloved mosque complex to be rebuilt with domes and arches in keeping with the Old City’s historic architectural style – and they are not happy with the modern cubist design that has been chosen.

“It’s not Mosul, it looks exactly like Sharjah,” said Rasha Al Qeedi, a senior analyst for the Newlines Institute for Strategy and Policy, referring to the Gulf emirate renowned for its contemporary architecture, including the Zaha Hadid-designed Bee’ah Headquarters.

“You see here the UAE influence,” said Al Qeedi, who is from Mosul. “But it did not require redesign.”

Al Nouri mosque gained global notoriety in 2014 as the site where Abu Bakr Al Baghdadi anointed himself head of a restored caliphate. It was his sole public appearance as the leader of Islamic State, shortly after the militants seized the city during a blitzkrieg takeover of roughly a third of Iraq and Syria.

Three years later, as Iraqi security forces fought a punishing nine month battle to retake Mosul, besieged Islamic State fighters demolished the mosque complex with explosives, rather than allow it to be retaken.

But long before its association with the militants, Al Nouri was renowned locally for its 12th century leaning minaret. Named Al Hadba, or “the hunchback”, the off-kilter tower in time became a symbol of the entire city. 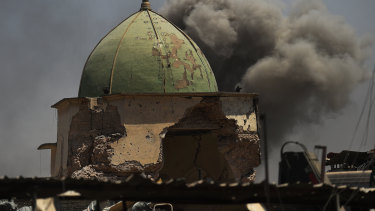 Smoke fills the air from an airstrike behind the historic Great Mosque of al-Nouri that was blown up by Islamic State militants as they retreated in Mosul in 2017. Credit:Kate Geraghty

The historical value of the Old City’s vernacular architecture should be paramount in rebuilding, said Mosul archaeologist Junaid Al-Fakhri.

“Al Nouri mosque is part of Mosul’s DNA,” he said. “The mosque and the minaret are archaeological and historical sites that must be preserved, and no detail should be changed that reduces their archaeological value.”

He questioned why a more traditional restoration was not selected, such as the entry submitted by Mosul architect Husnya Jirgis, who wrote in her application that she wanted to maintain the mosque’s “original character and authenticity”.

The winning Egyptian team said their submission “primarily addresses the need for social cohesion and revival of souls”.

UNESCO said the nine jurors on the selection panel included two Iraqis and that they consulted with representatives from the Iraqi prime minister’s office and the Ministry of Culture.

Paolo Fontani, the head of UNESCO in Iraq, said the mosque’s iconic minaret will be rebuilt as it was before, as will the prayer hall, which will be reconstructed using modern building materials to improve lighting and cooling.

Better landscaping and gardens around the mosque will make the complex more inviting, Fontani said, while a recently acquired lot adjacent to the mosque complex will include schools, a guesthouse and a centre for art and Islamic architecture. 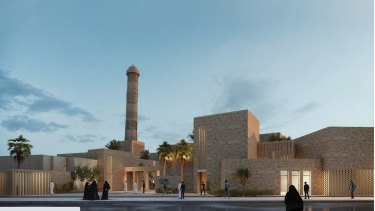 An artist rendering of the rebuilt Al-Nouri mosque in Mosul, Iraq. It had been destroyed by Islamic State militants, who declared a caliphate in the religious building.Credit:UNESCO

This part will be “a little more forward looking,” Mr Fontani said of its architectural style. “There was nothing there before, there was a parking lot, we’re not destroying anything.”

“It’s a mix of modernity and tradition and this is what the jury liked,” he said.

Hurricane tax relief from Hurricane Laura: Do I qualify?