Washington: A new poll of Democratic primary voters conducted by The Wall Street Journal and NBC News shows a significant consolidation of support behind former vice president Joe Biden, emphasising Senator Bernie Sanders' failure to broaden his support the way Biden has over the past few weeks. 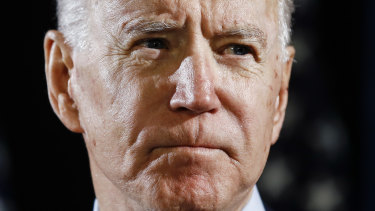 Among those Democrats who have voted or plan to vote, 61 per cent say Biden is their preferred nominee as opposed to 32 per cent who prefer Sanders. In a poll conducted in mid-February, 15 per cent of voters identified Biden as their preferred choice.

Biden's swift transformation into consensus front-runner followed a decisive win in South Carolina, at which point multiple candidates who had been splitting the loyalties of the electorate dropped out and endorsed the former vice president.

But even after fellow liberal-leaning Senator Elizabeth Warren dropped out of the race last week, Sanders' support jumped just five points – to 32 per cent – in a much smaller field.

And the poll showed reason to believe it won't grow much further: In the Wall Street Journal/NBC News poll conducted a month ago, 37 per cent of Democratic primary voters said they had decided on a candidate. In this poll, 80 per cent said their minds were made up.

The poll also underscored Biden's support with one of the most crucial groups within the Democratic Party, black voters, who said they prefer him to Sanders, 77 per cent to 18 per cent.

On Sunday, Biden unveiled a proposal to make public college free for families who make less than $US125,000 ($200,000) a year, part of his campaign's broader effort to court younger and more liberal voters. Biden has also said he wants to invest $US70 billion in historically black colleges and minority-serving institutions.

Free college tuition has been a staple for Sanders and for Warren and former South Bend, Indiana, mayor Pete Buttigieg, who dropped out of the race after finding the road to the nomination nearly impossible to traverse.

On Friday, Biden also adopted Warren's bankruptcy plan, which would make it easier for people to go through the bankruptcy process and would allow student loan debt to be discharged just like any other debt.

"Vice President Biden is and, as president, will be open to the best ideas . . . regardless, quite frankly, of where they come from," a Biden adviser said.

Biden and Sanders will face off Sunday night in a one-on-one debate, the first of the Democratic primary.

The debate comes as the country grapples with an escalating coronavirus pandemic. Both Sanders and Biden have significantly scaled back their campaign events in recent days in response to the novel coronavirus, cancelling mass gatherings in favour of online events.

Those decisions come as states consider whether to hold votes at all. Already, Louisiana and Georgia have announced that they will postpone their primaries.

But the four states scheduled to hold primaries Tuesday – Arizona, Florida, Illinois and Ohio – announced last week that their contests would proceed as planned. They pointed to guidance from public health officials, who have declared voting safe if best practices are followed.

Woman, 33, who avoided jail by lying to judge about having a baby is locked up as he blasts 'outrageous lie'