A Japanese court has sentenced a man to death for the 2016 murder of 19 disabled people at a care home, one of the country’s worst mass killings.

Satoshi Uematsu, a former employee of the facility, never disputed his involvement in the grisly stabbing rampage, but his lawyers entered a plea of not guilty, arguing the 30-year-old was suffering a ‘mental disorder’ linked to his use of marijuana.

Chief judge Kiyoshi Aonuma dismissed that argument on Monday and ruled Uematsu deserved no leniency over the horrifying attack, which shocked the country.

‘The lives of 19 people were taken away. This is profoundly grave,’ he told the court.

Uematsu planned the murders and had ‘an extreme intention to kill’, the judge said. 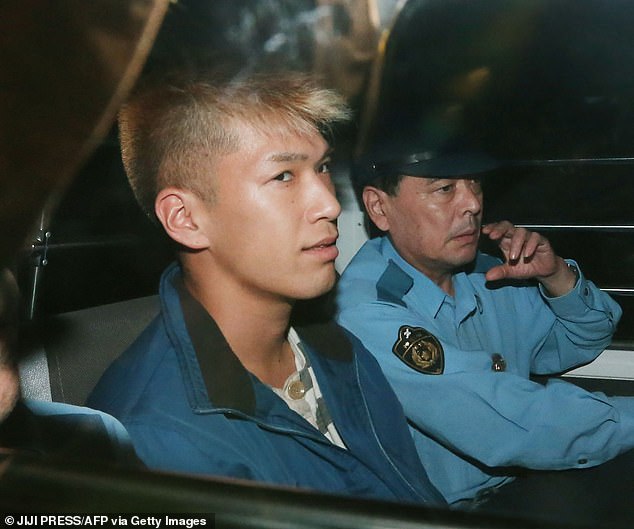 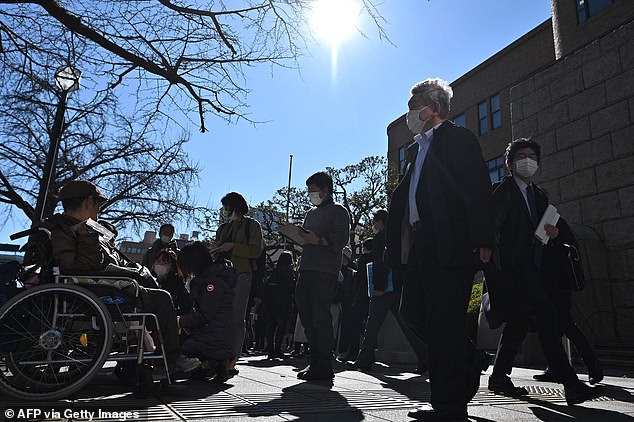 Journalists gather outside the Yokohama district court on March 16, 2020, after the court sentenced Uematsu to death 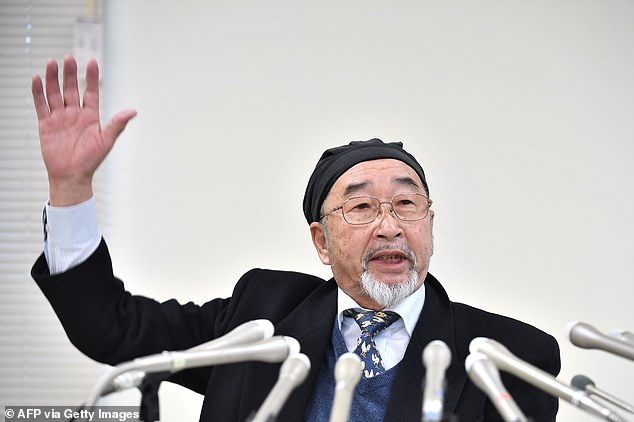 The father of one of the victims who was injured, Takashi Ono, speaks during a press  conference on Monday

Prosecutors sought the death penalty, which in Japan is implemented by hanging, arguing Uematsu was capable of taking responsibility for what they said was an ‘inhumane’ attack at the Tsukui Yamayuri-en centre in Sagamihara town, just outside Tokyo.

Uematsu’s behaviour in court, including apparently trying to put something in his mouth, disrupted proceedings at the first hearing in January, with the judge calling a recess and then resuming without him.

But he was impassive on Monday as the verdict was announced, looking straight ahead at the judge during the sentencing.

He wore a black suit with his hair in a long ponytail down to his waist, and was flanked by six uniformed court officers wearing surgical masks.

Uematsu, who faced six charges including murder, reportedly said before the trial that he would not appeal any verdict, though he argued he did not deserve the death penalty.

He has reportedly said he wanted to eradicate all disabled people in the horrifying attack that also left 26 people wounded. 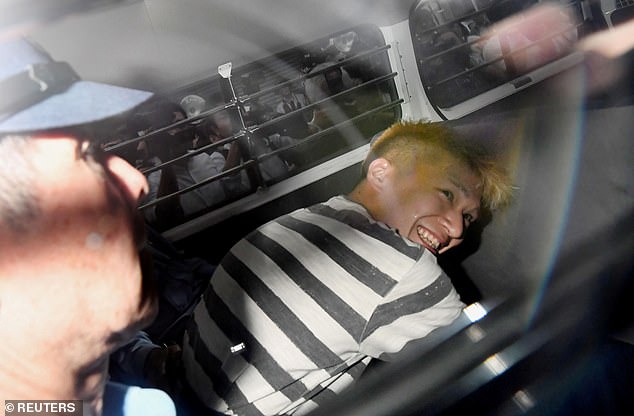 Uematsu (pictured in 2016) reportedly said before the trial that he would not appeal any verdict, though he argued he did not deserve the death penalty 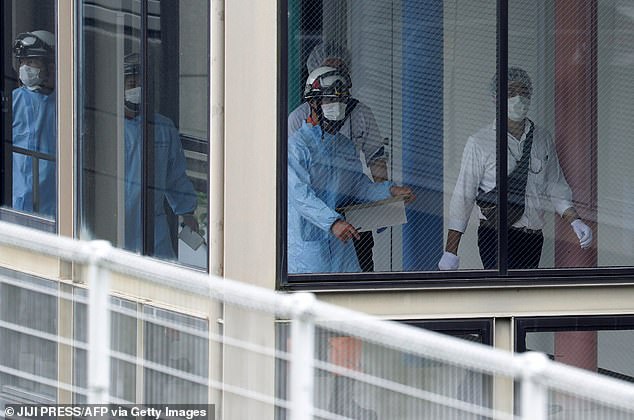 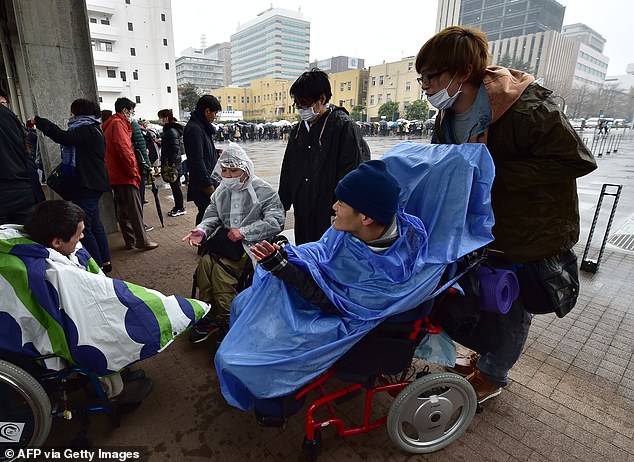 People in wheelchairs attend a lottery for admission tickets to the court hearing of Satoshi Uematsu on January 8, 2020

He turned himself in to police after the assault, carrying bloodied knives, and it later emerged he had left his job at the home just months earlier and been forcibly hospitalised after telling colleagues he intended to kill disabled people at the centre.

But he was discharged after just 12 days when a doctor decided he was not a threat. He had also written a letter outlining plans to attack the home, claiming ‘disabled people only create unhappiness’.

Among the few victims to be identified publicly was a 19-year-old woman, Miho, whose mother had said at the court that Uematsu ‘didn’t need a future’.

‘I hate you so much. I want to rip you apart. Even the most extreme penalty is light for you. I will never forgive you,’ her mother said before the verdict, according to public broadcaster NHK.

‘I demand capital punishment,’ she added. 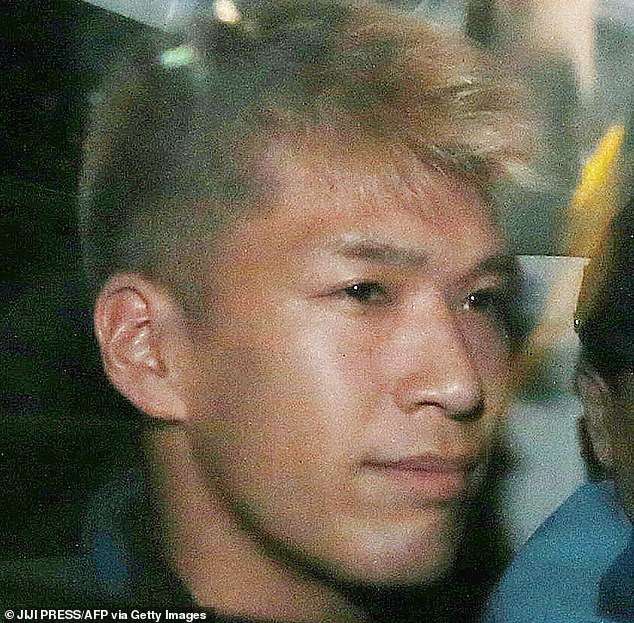 In this file photo taken on July 27, 2016 convicted murderer Satoshi Uematsu sits in the back seat of a police vehicle as he returns to the Tsukui police station in Sagamihara, Kanagawa prefecture, Japan . Uematsu has shown no remorse for the attack, telling Japan’s Mainichi Shimbun daily that people with mental disabilities ‘have no heart’, and for them ‘there’s no point in living’

The trial has been closely watched, and a court spokesman said 1,603 people lined up for 10 seats available for the verdict.

The number of spots was reduced because of rules requiring spectators sit apart to prevent the spread of coronavirus.

Uematsu has shown no remorse for the attack, telling Japan’s Mainichi Shimbun daily that people with mental disabilities ‘have no heart’, and for them ‘there’s no point in living’.

‘I had to do it for the sake of society,’ he said.

Uematsu’s beliefs shocked Japan, with experts and activists raising questions about whether others might hold similar views.

Japan has been making efforts to increase accessibility – particularly in Tokyo ahead of this year’s Paralympic Games – and activists hailed last year’s election of two disabled lawmakers.

But some critics feel the country still falls short of fully integrating people with disabilities.

Now there are 'TWO wild pumas stalking the Welsh countryside'