A new mouth opened on La Palma’s volcano overnight after a 3.8 magnitude earthquake rocked the island, forcing fresh evacuations as the lava inched its way towards the ocean – swallowing homes and farmland in its path.

The new vent was spotted half a mile north of the old site after the earthquake – the most-powerful on the island since the initial eruption – struck at 9.30pm, forcing around 500 people in the Tacande area to flee as a fresh stream of lava emerged.

In total, 6,000 people of the island’s 80,000 inhabitants have now been forced from their homes by the eruption, which began on Sunday and is the first in 50 years. Hundreds of tourists have also been affected.

Millions of gallons of lava belched out of the ground is now snaking its way towards the island’s west coast where it is expected to drop into the ocean today – creating a toxic cloud of hydrochloric acid laced with fine glass particles that form when the molten rock is rapidly cooled.

Police have set up an exclusion zone to prevent people from getting too close to the cloud, stretching from the tourist resort of Puerto Naos in the south to Playa Vina in the north and heading two nautical miles out to sea.

Nobody has been injured by the eruption so-far as earthquake data provided ample warning for evacuations to take place. However, a total of 166 houses have been destroyed with some 250 acres of ground burned up by the lava including large stretches of farmland. 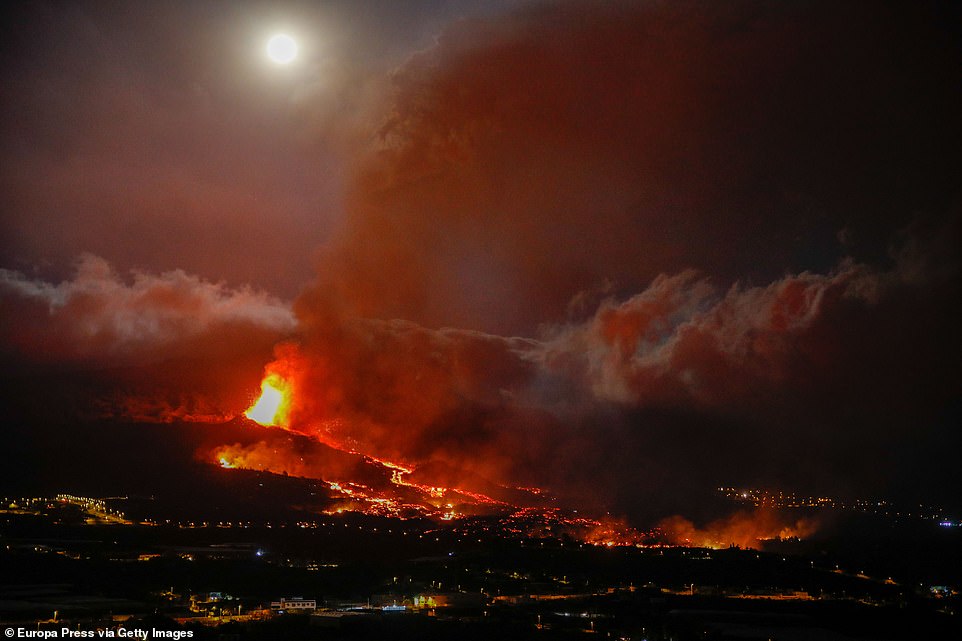 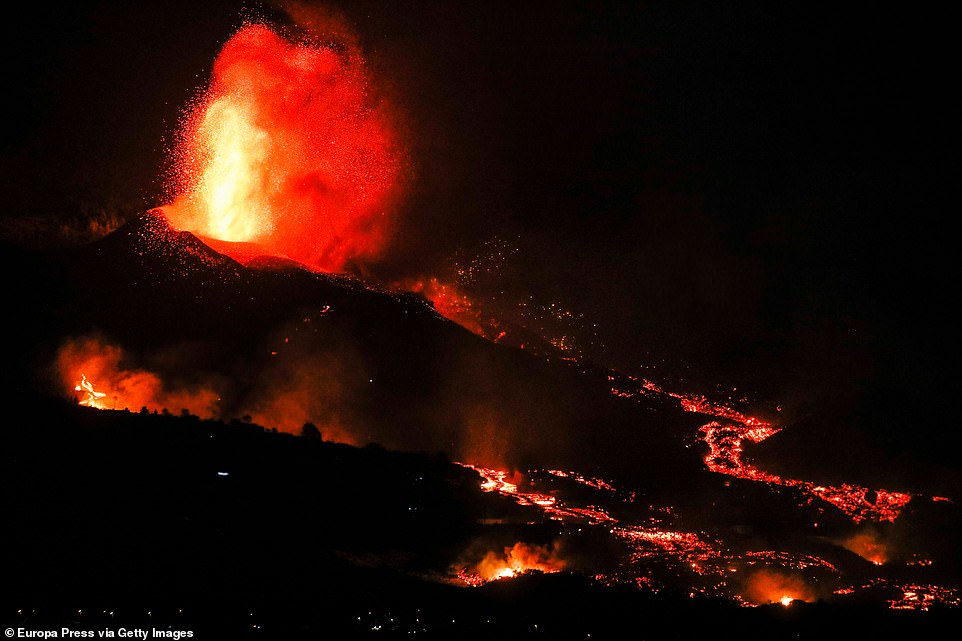 The eruption began on Sunday on the Cumbre Vieja ridge, an area known for its volcanic activity but at a site that has not seen an eruption in the past. Experts believe it could last for weeks or even months 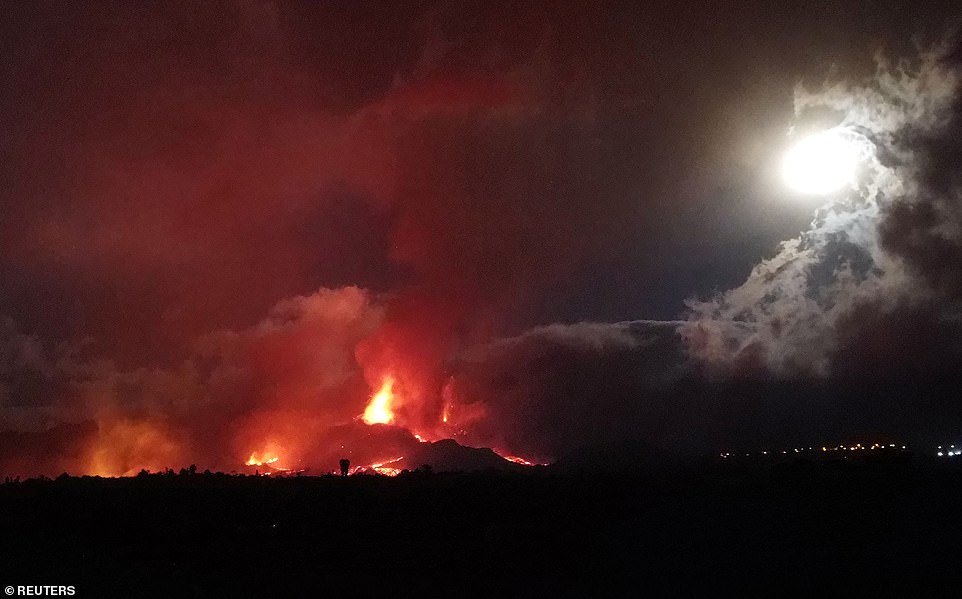 166 homes have been destroyed so-far along with 250 acres of farmland, but thankfully nobody has been injured after earthquake data gave scientists a tip-off that something was about to happen 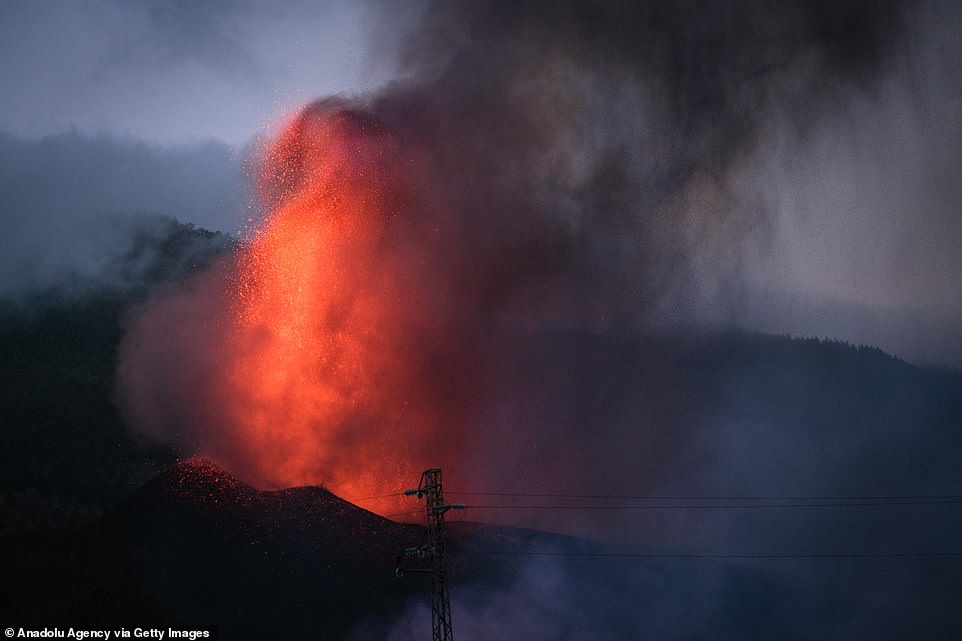 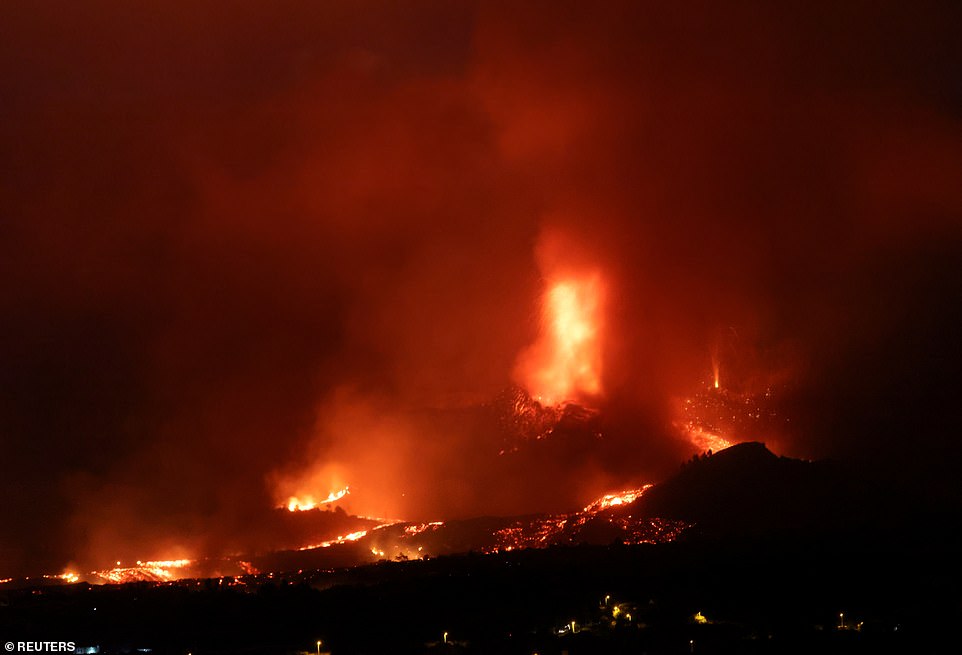 Lava is now flowing from the volcano to La Palma’s west coast where it is expected to fall into the ocean today, creating a toxic cloud with police setting up an exclusion zone to keep people away 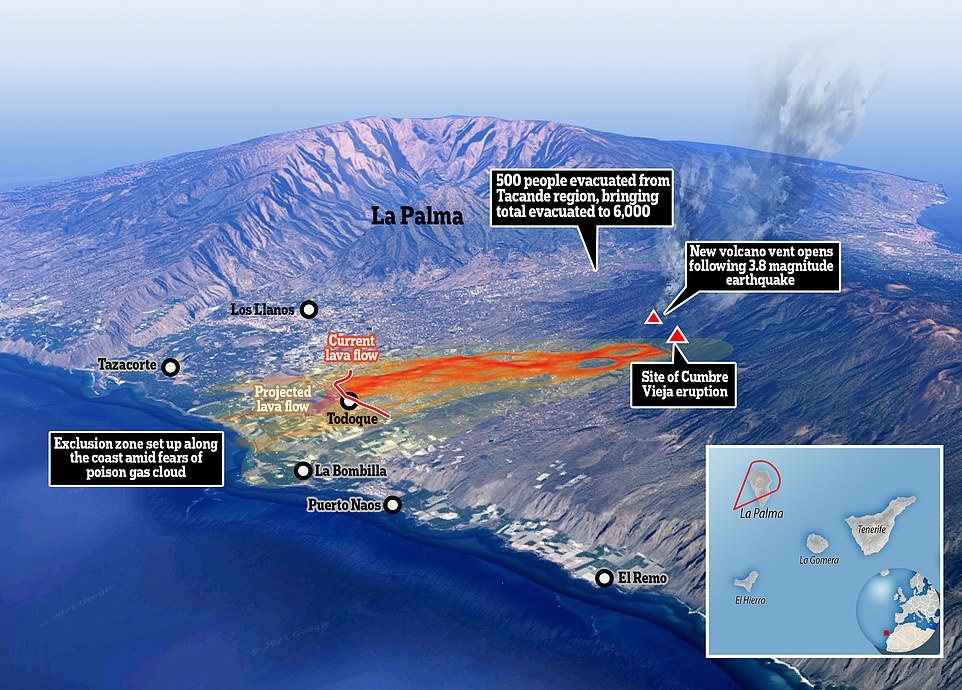 A new volcano vent opened on La Palma overnight, forcing evacuations from the Tacande region (pictured right). Lava is now inching towards the ocean, and has reached the town of Todoque (centre). It is expected to hit the water later today and produce a cloud of toxic gas, with an exclusion zone set up from Puerto Naos in the south to Tazacorte in the north (left)

‘The lava on its path to the sea has been a bit capricious and has diverted from its course,’ Rodriguez said.

The current eruption is taking place on the Cumbre Vieja ridge, an area of intense volcanic activity that has been the site of every major eruption on La Palma since the 1640s.

The site of the new eruption is new with no volcanic activity reported there in the past, and opened up after a cluster of earthquakes forced molten rock close to the surface and then split the ground for it to flow out.

Scientists had been monitoring the area closely after thousands of mostly-small earthquakes were detected, meaning people were ready to evacuate as soon as the eruption started – preventing any deaths or injuries.

Of the 166 homes destroyed so far, one of them belonged to German couple Matthias and Anette Fuchs, 65 and 64 respectively.

They said they fell in love with the house the moment they first saw it. Built in the islands’ traditional architectural style using volcanic materials from previous eruptions, the couple had been improving it over nearly four decades.

‘It was a special place, we saw it once and we fell in love,’ Anette Fuchs told The Associated Press, recounting how the couple hosted large dinners for friends and visiting relatives. ‘It was a paradise.’

The lava was moving at 2,300ft per hour, according to the Canary Islands Volcanology Institute, though this has since slowed to around 1,000ft per hour as the force of the eruption has lessened.

Authorities on La Palma, where people largely live from farming, told residents in a wide area where volcanic ash is falling to stay indoors with their doors and keep their windows closed.

Based on the amount of lava that scientists believe is pent up underground and the force of the eruption, they believe it could last anywhere between two weeks and two months.

Daniel Alvarez, a bar owner in Las Manchas, one of the closest villages to the volcano, was evacuated with his family on Sunday and was staying at the El Fuerte military barracks with some other 300 evacuees.

He didn’t know whether the lava had consumed his home.

‘For now,’ he said, ‘it seems like it’s safe, but the lava is opening many paths. We have all of our lives inside (our house). We would need to start over again.’

‘There will be considerable material damage,’ Torres told SER radio. ‘We hope there won’t be any personal injuries.’

Late Monday, lava began flowing from a new fissure that opened on the volcano following an earthquake that shook the ridges of Cumbre Vieja, the Canary Islands Volcanology Institute. 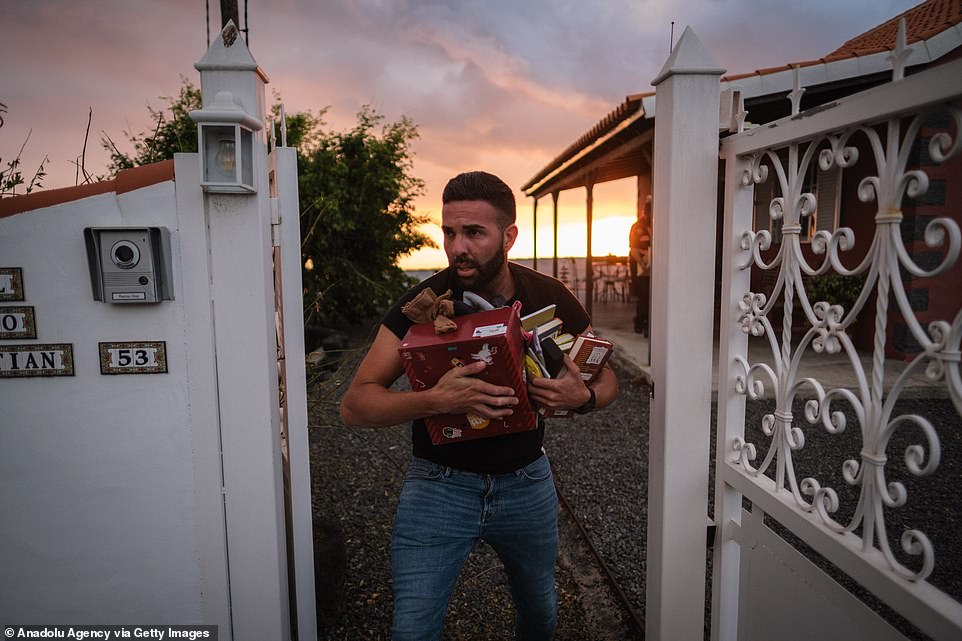 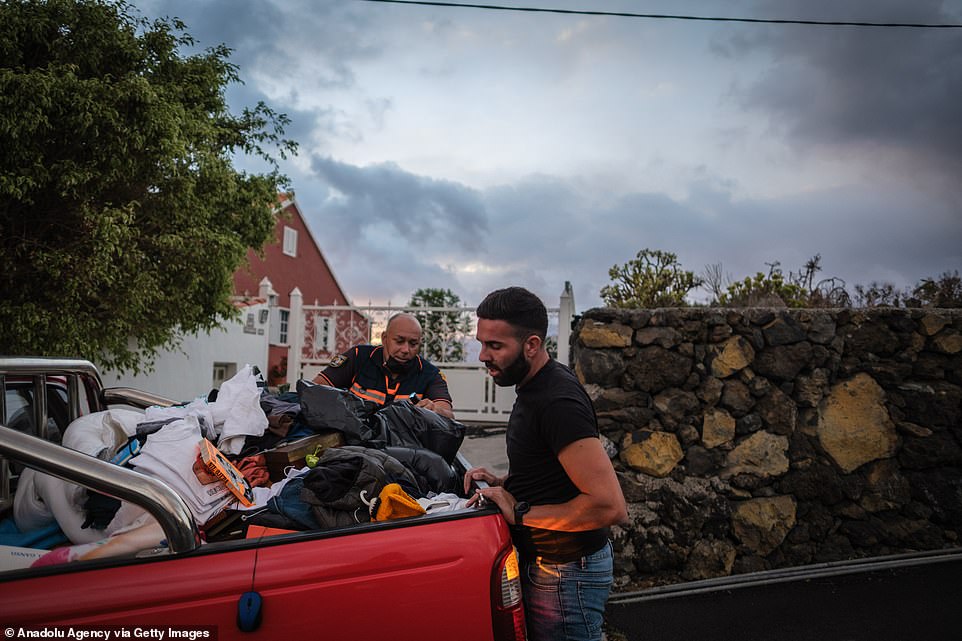 People leave their homes as Mount Cumbre Vieja continues to erupt in El Paso, spewing out columns of smoke, ash and lava 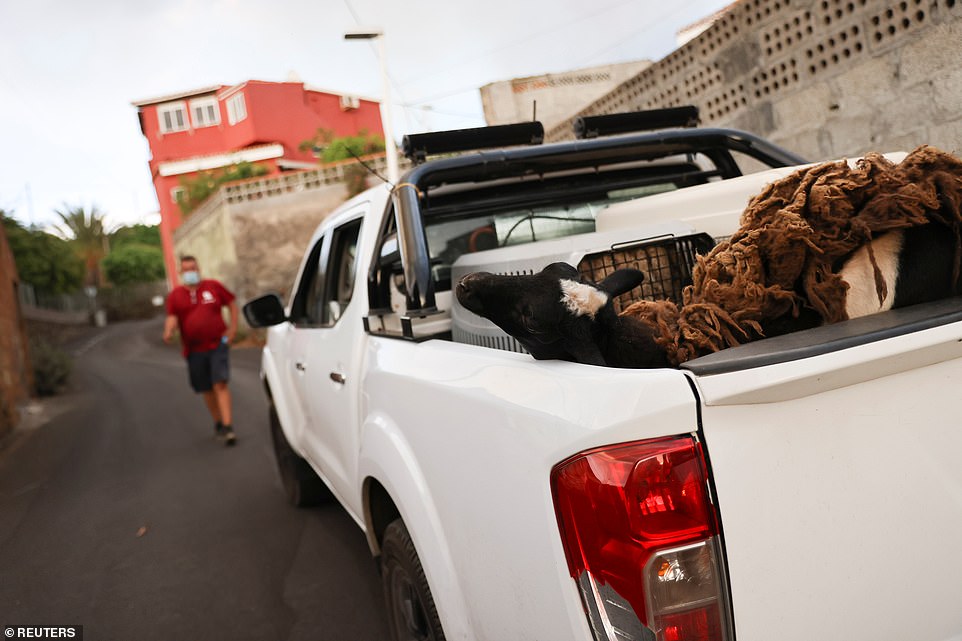 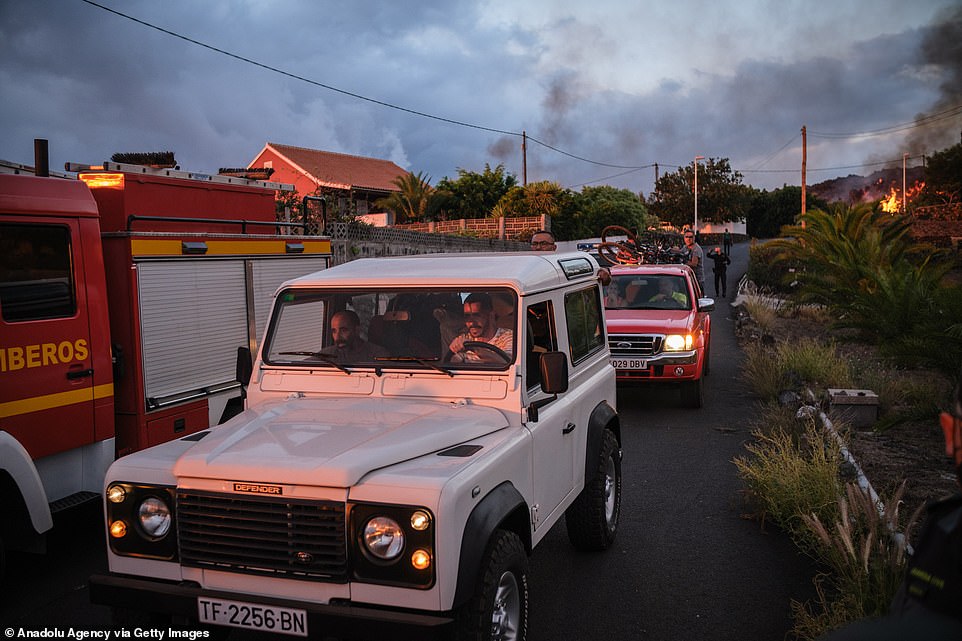 People leave their homes as Mount Cumbre Vieja continues to erupt in El Paso, spewing out columns of smoke, ash and lava

Authorities then ordered the evacuation of another neighborhood and closed some roads. It was not immediately clear how many people were involved in the new evacuation.

He praised scientists for monitoring the eruption, saying their work was ‘fundamental’ in avoiding casualties, and promised that his government would help local people rebuild their lives.

The Canary Islands Volcanology Institute reported the initial eruption shortly after 3 p.m. Sunday near the southern end of the island, which saw its last eruption in 1971.

A 4.2-magnitude quake was recorded before the eruption, which took place in an area known as Cabeza de Vaca on the western slope as the ridge descends to the coast.

La Palma, with a population of 85,000, is one of eight Canary Islands. At their nearest point, the islands are 100 kilometers (60 miles) from Morocco.

St. Louis woman hits cop with her own baton after being told to wear mask

Man busted for coronavirus-inspired robbery of Asian woman in Brooklyn