Beirut: The Lebanese prosecutor probing a massive port explosion in Beirut in August has filed charges against the caretaker Prime Minister and three former ministers, accusing them of negligence that led to the death of hundreds of people, Lebanon’s official news agency said.

The four are the most senior individuals to be indicted so far in the investigation, which is being conducted in secrecy. 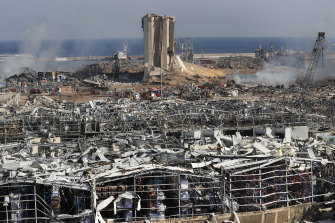 The huge explosion devastated the port of Beirut in August.Credit:AP

All four were charged with carelessness and negligence leading to death over the August 4 explosion at Beirut’s port, which killed more than 200 people and injured thousands.

The explosion was caused by the ignition of a large stockpile of explosive material that had been stored at the port for six years, with the knowledge of top security officials and politicians who did nothing about it. 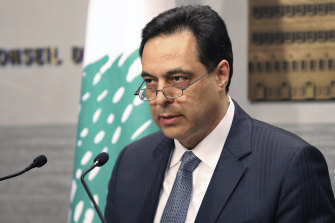 Lebanon’s caretaker Prime Minister Hassan Diab has been charged over the explosion.Credit:AP

Diab is a former professor at the American University of Beirut who became Prime Minister late last year. Although he served as minister of education from 2011-14, he is considered to be an outsider to the political ruling class that has run Lebanon since the end of the 1975-90 civil war.

Diab received the backing of the Hezbollah group and its allies after former prime minister Saad Hariri resigned in the wake of mass anti-government protests last year. Diab himself resigned a few days after the blast, which levelled the country's main port and destroyed large parts of the city. He has continued to function in caretaker capacity while efforts to form a new government have floundered amid political disputes.

Commenting on Thursday's development, Diab said his conscience was clear and he was confident that his hands were clean and that he handled the Beirut port blast "in a responsible and transparent manner".

A statement issued by his office accused Judge Sawwan of violating the constitution and bypassing parliament, adding that Diab had already provided all the information he had to Sawwan.

“This surprising targeting goes beyond the person to the position per se, and Hassan Diab will not allow the premiership to be targeted by any party,” a statement issued by his office said.

It was not clear whether his comments meant he would not accept to be interrogated again. Judge Sawwan said he would interrogate Diab and the three ministers as defendants next week.

Lahoud, who also represents the Beirut Bar Association working on behalf of the families, said an indictment doesn’t mean incrimination, and that it is the 5-member judicial council that would issue verdicts.

The August 4 blast is considered to be among the largest non-nuclear explosions ever to be recorded.

Documents surfaced soon after the explosion showing that at least 10 times over the past six years, authorities from Lebanon’s customs, military, security agencies and judiciary raised the alarm that a massive stockpile of potentially dangerous chemicals was being kept with almost no safeguard at the port in the heart of Beirut.

President Michel Aoun, in office since 2016, said he was first told of the stockpile nearly three weeks before the explosion and immediately ordered military and security agencies to do “what was needed”. But he suggested his responsibility ended there, saying he had no authority over the port and that previous governments had been told of its presence.

Since the material arrived in Lebanon in late 2013, four prime ministers have been in office. It was not clear why Sawwan has singled out Diab among the ex-premiers who have held the post while the nitrates were improperly stored at a port warehouse, a ticking bomb.

Former prime ministers Najib Mikati, Tammam Salam and Saad Hariri have reportedly said that they were not aware of the existence of the material. Diab has said he was only informed about the presence of the “explosives” days before the blast and had planned to visit the port. Later, he told reporters he cancelled the visit after being told the stored chemicals were fertilisers.

“There is a list to be made of all those who knew and should all be held responsible,” said Elie Hasrouty, whose father died in the port explosion. “Their job is not to refer (the matter) to others, but to stop that ‘bomb' from going off and to protect people.”

Investigators probing the blast had so far focused on personnel at the Port of Beirut.

Both Khalil and Fenanios were sanctioned by the US in September this year, the first two officials to be subjected to those outside of the militant Hezbollah group.

Who are Jon Ossoff's parents Richard Ossoff and Heather Fenton?