Paris: French President Emmanuel Macron's government has defeated not just one but two no-confidence votes, allowing it to force an overhaul of the retirement system through the lower house of parliament despite months of protests.

Thousands of people took to the streets of Paris and other cities the day before the vote to denounce the pension changes, which they fear will oblige people to work longer for less money. Currently the eligibility age for a full pension is 62. 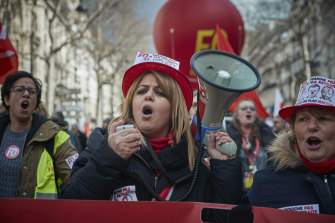 Members of the FO Union chant during demonstrations in Paris after French unions called for national strikes.Credit:Getty Images

As members of the National Assembly accused Macron of "dictatorial" behaviour in a debate that started on Tuesday and lasted past midnight, protesters illuminated the Champs-Elysees with red flares and intoned the national anthem, the Marseillaise.

Now, demonstrators are angry at Prime Minister Edouard Philippe's decision last week to use a special constitutional power to push the retirement bill through the assembly without a vote, to speed up the complex legislative process after the damaging strikes. 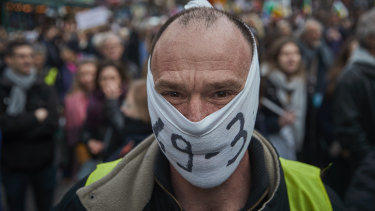 A protester wears a “49.3” face wrap during demonstrations in response to France enacting article 49.3 of the constitution to force through the pension reform bill.Credit:Getty Images

In response, opposition politicians from the left and the right called two no-confidence votes against Macron's centrist government.

Despite all the public criticism Macron has faced, his Republic on the Move party has a large majority in the National Assembly, and the votes both fell far short of the 289 needed to pass.

That means the bill has now cleared the lower house, and goes next to the Senate, where conservatives have the majority.

The left wants to scrap the reform, fearing it weakens France's welfare state and will force workers to rely on private pension funds, while some politicians on the right say it isn't bold enough. 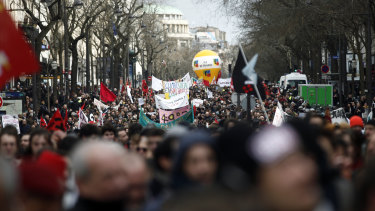 Demonstrators march to protest against pension reform plans, in Paris on Tuesday, ahead of votes in the National Assembly.Credit:AP

The Prime Minister defended his decision to force the bill through, and insisted the retirement reform was the only way to save the welfare system as the population ages and life expectancy lengthens.

"This model is our most precious asset, it's our national treasure," Philippe told legislators. "We must fix it when it is not working, to be able to pass it on to our children."

The government hopes to pass the law by the northern summer. But debates on the bill in the lower house were slowed by a record 41,000 amendments proposed by the opposition.

New strikes and protests are planned for March 31.

The bill doesn't directly touch the pension age. But in parallel, the government is holding a three-month discussion with unions about financing the pension system, including potential measures to raise taxes or the retirement age. The hard-left CGT and FO unions oppose those measures and quit the talks.

The pension overhaul was a key promise in Macron's 2017 presidential campaign. Macron argues the new system, which aims to unify 42 state-funded pension regimes, will be fairer and more sustainable.

The changes would end some specific pension schemes under which certain people, such as railway workers, are allowed to retire as early as their 50s, and others, such as lawyers, pay less taxes.

British expat dies after plunging down an uncovered manhole in Spain