Singapore: To gain in an insight into just how serious Malaysia’s fight with COVID-19 has become you would only need to walk past Sungai Buloh Hospital on the outskirts of Kuala Lumpur.

There, the bodies have been piling up so frequently that a shipping container has been converted to a makeshift morgue.

Twice this week the south-east Asian nation of 32 million hit a record of new daily cases, peaking at 6075, while deaths climbed as high as 47 in a day. 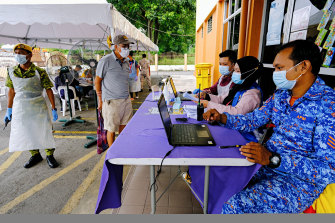 Pressure is building on intensive care units and a sluggish vaccine rollout gives no sign of relief.

But there is growing discontent about the handling of the virus this year and concerns about the creeping authoritarianism of the government of Prime Minister Muhyiddin Yassin.

Since January 12, Malaysia has been in a state of emergency, with parliament suspended for the first time since independence from Britain in 1957. It was declared by the king, Sultan Abdullah of Pahang, on the advice of the Prime Minister.

It gives the government emergency powers, even allowing it to take temporary possession of property, and allows it to introduce bans against “fake news”, which carries a three-year jail term for misinformation about the pandemic.

In an interview with The Sydney Morning Herald and The Age, opposition leader Anwar Ibrahim said the measure was enacted to cling to authority “under the banner of emergency”, as Muhyiddin’s Perikitan Nasional ruling bloc was sliding into minority government as it lost support from members its biggest party, the United Malays National Organisation (UMNO).

“We had adequate provisions in the law to deal with this situation,” said Anwar, the former deputy prime minister who leads the multi-racial rival coalition Pakatan Harapan. “The only reason I would say [parliament was suspended] is they wanted to secure their position. It is a political position, nothing to do with COVID.”

The state of emergency is due to run until August 1 but with virus numbers now double what they were when it was called, Anwar believes there is “no way will they convene parliament because they’ve lost the majority” of the 220 seats in the federal parliament. 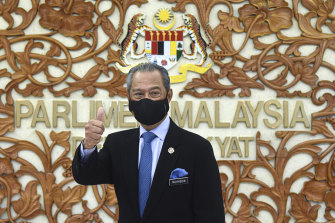 The decision to end or extend the emergency rests with the king but under Malaysia’s constitution, it should be taken on the advice of the Prime Minister, leaving open the chance it will be extended beyond the next 10 weeks.

Anwar, for decades the almost-was of Malaysian politics, indicated an openness about resuming parliament “without necessarily going through a vote of no confidence” in the Muhyiddin administration as the pandemic raged. But he declared the government had not only lost the backing of its partners in the Malay-centred governing pact, but the confidence of the public over its response to COVID-19.

Muhyiddin on Thursday took aim at wealthy nations for not exporting enough vaccines but as Malaysian states now try to get vaccines directly, Anwar said the Prime Minister could not use that to deflect from “a failure of domestic policies”.

“The Prime Minister must honourably resign,” he said. “There is no coherence and clear incompetence. You have an announcement, for example, at 3pm where the ministry of defence will say there be an MCO (movement control order) in a few districts. At 8pm, the Prime Minister says it is for the whole country. There is no coordination. Even vaccines locally … why did they take so long to even order and buy these vaccines?

“It is the Titanic and they are the captain.”

Malaysia’s record infections have come after schools and Ramadan bazaars remained open while cases rose during the Muslim holy month and despite restrictions being tightened before Eid-al-Fitr celebrations.

told Nikkei’s Future of Asia conference on Thursday that government had had to strike a balance between protecting lives and economic considerations, highlighting six stimulus packages worth 340 billion Malaysian ringgit ($A105bn), a figure amounting to 20 per cent of the country’s GDP.

“Owing to the sheer complexity of the pandemic fallou,t policy makers at all levels have been confronted with having to perform difficult and near impossible juggling act,” he said.

While fewer than a million people have been fully vaccinated, the pace will improve next month, according to coordinating minister Khairy Jamaluddin, with more doses due to arrive.

Never far from the scene, former prime minister Dr Mahathir Mohamad – who reneged on a promise to pass the baton to Anwar before his government collapsed last year – called on Thursday for people to be confined to their homes to deal with the new surge.

The nonagenarian has previously petitioned the king to lift the suspension of parliament.

Professor James Chin, an expert on Malaysian politics at the University of Tasmania, believes most Malaysians would give Muhyiddin the benefit of the doubt over the state of emergency but said COVID-19 had “served this backdoor government very well”.

“It has allowed it to do a lot of things – to stop parliament, to access the reserve fund, to enforce laws normally it can’t impose,” he said. “It also shows the failure of a country like Malaysia … because there are no checks an balances, things can get out of control very easily.” 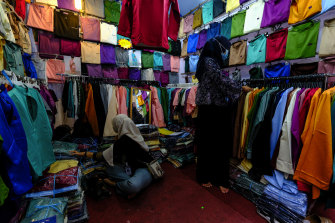 Shops were open in Malaysia during Ramadan but restrictions ramped up at the end of the month. Credit:Bloomberg

Dr Amrita Malhi, a research fellow at the Australian National University, said the alarming lift in cases was undermining the legitimacy of the emergency status.

“Public anger is rising and yet there is no legitimate political process currently operating that could help channel that anger,” she said.

Malaysia’s next election is not due until 2023 but Muhyiddin has maintained he will call voters to the polls when the country emerges from the pandemic. That is clearly some way off and the assembly of millions of people to vote, risking further spreading the virus, is about the last thing Malaysia needs now.

But when the time comes Anwar, 73, believes his People’s Justice Party (PKR) can assemble an alternative majority to form government and finally ascend to the prime ministership. That includes the possibility of a tie-up with nemesis Umno and even another unlikely alliance with Mahathir, although the 95-year-old’s new party has only a handful of MPs.

“I’m prepared to talk to anyone as long as they agree that this country needs to affect change for good governance and rid the country of systemic corruption,” Anwar said.

“I don’t worry too much what happened with Mahathir reneging on the promise because that was not the first time.”

Banksy-style graffiti of prisoner appears on wall of HMP Reading