A fit and healthy 34-year-old has told how a freak reaction to the Astra-Zeneca Covid jab left him in intensive care with blood clots, fearing for his life.

‘I thought I had pulled a muscle on my 5km run nearly two weeks after having the jab – but within days I was in hospital and they told me the blood clots might reach my brain,’ said Mohammed Choudhury.

The married financial services worker from Poplar, east London, is now recovering at home and will have to take blood thinners for at least the next six months.

But he says he still strongly believes people should have the vaccine – even though he will not have the second jab himself on medical advice.

‘Despite my experience I would still advise anyone to have the jab. I just want to raise awareness of the signs to look for in the extremely rare cases where blood clots developed as a side-effect’ Mohammed told MailOnline. 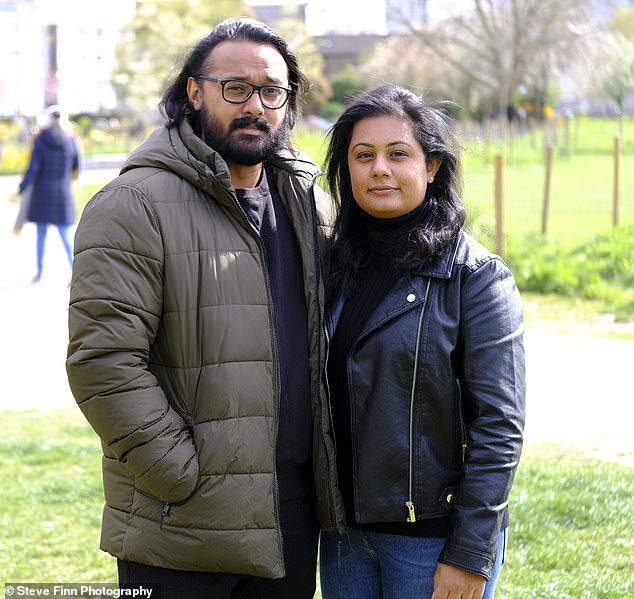 Mohammed Choudhury (pictured with his wife Alia) has told how a freak reaction to the Astra-Zeneca Covid jab left him in intensive care with blood clots, fearing for his life 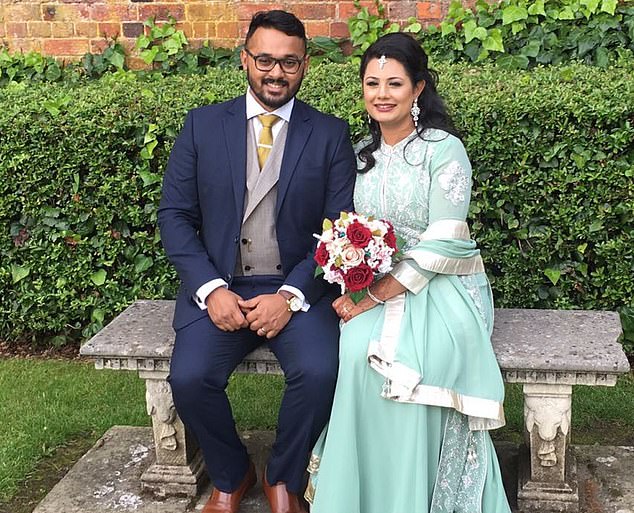 The married financial services worker from Poplar, east London, is now recovering at home and will have to take blood thinners for at least the next six months

Mohammed, 34, had no immediate reaction after receiving the jab and when he began to feel pains in his calf some 13 days later he initially thought it was due to pulling a muscle after one of his regular 5km lockdown runs with wife Alia.

But over the following five days he developed chest pains, breathlessness and headaches, and sought medical help by calling 111 and was admitted to The Royal London Hospital that evening after being advised to visit A&E. After a series of tests he was rapidly put on critical care.

‘In the space of 24 hours I went from expecting maybe a painkiller for a pulled muscle or something to being in a critical care ward on my own, unable to be visited by my wife,’ he told MailOnline in an exclusive interview.

‘There was a lot of fear of the unknown at first, as I didn’t know for a few days what the brain scan showed and whether there was an even higher risk to my health.

‘I didn’t know how dangerous these clots were as I have no history of this and I’m a healthy young man. It’s not the kind of thing that’s ever happened to me before.’ 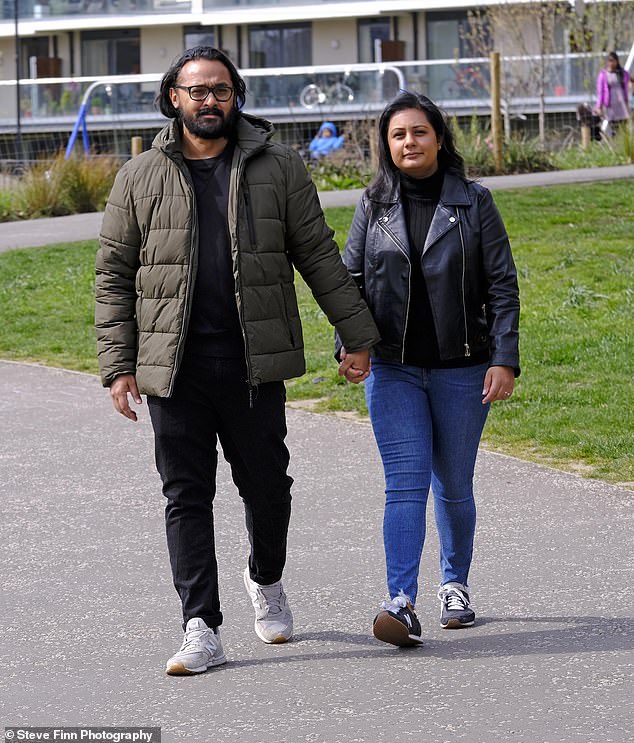 Mohammed, who lives with Alia, 31, in Poplar said that despite his experience he would still advise anyone to have the jab

Mohammed, who lives with Alia, 31, in Poplar said that despite his experience he would still advise anyone to have the jab, but wanted to raise awareness of the signs to look for in the extremely rare cases where blood clots developed as a side-effect.

The drama began on March 10 when Alia was called in for her own jab and because of some missed appointments, Mohammed was asked if he wanted to take up one of the spare doses and agreed.

It wasn’t until something like 13 days later that he first noticed pain in his right calf and because the husband and wife had both been regularly running 5k twice a week, he assumed it was a muscle pain. 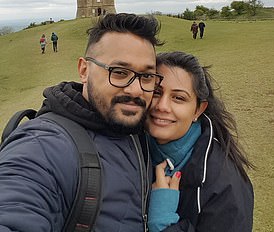 March 10: Alia and Mohammed Choudhury both receive the AstraZeneca jab at vaccination centre.

March 23 (approx): Mohammed begins to feel pain in his right calf and puts it down to muscle strain after running with his wife.

March 23-March 28: The leg pain persists and he also begins to experience pains in his chest, along with breathlessness and dizziness

March 29: He calls NHS Direct and after a telephone consultation with a doctor an appointment is made at the Royal London Hospital’s A&E Dept. Mohammed is admitted to a ward for tests

March 29-30: Tests reveal that he has blood clots in his leg and lungs; a CT scan is ordered to check for clots on the brain. Mohammed is moved into the critical care ward.

March 31: Mohammed is relieved to hear that his brain is clear from clots.

‘I put some ice on it, but it didn’t go away and a few days later I began to get chest pain and headaches,’ he said.

‘One Sunday night (March 28) it became unbearable and I called NHS Direct and they made me an appointment to go straight to A&E at the Royal London Hospital.

‘The diagnosis of DVT was a real shock. They told me it started in my leg and had spread to my lungs and they would have to give me a CT scan to check if there was any clots on the brain.

‘Initially I was on the ward, then moved into critical care. This was out of nowhere, I had no understanding that this was even a possibility. When they said they needed to scan me to check for clots in the brain, that was a really scary moment.

‘I had to call Alia and have a really upsetting conversation with her about what they’d found and what might happen next. It was very apparent from the beginning that this was very new – many of the doctors were saying this was uncharted territory and we’d have to see how things went as they progressed.

I was moved to a critical care unit where I had a few IV tubes going into me with blood thinners and anti-biotics because I had a temperature and there was also a drip with antibodies.

‘The general aim was to allow my body’s platelet count to recover while also thinning my blood to stop any new clots forming or growing those already present.’

Thankfully, after a few days, Mohammed’s brain was declared free of clots and on Easter Monday, he was released from the Royal London.

He said: ‘I can’t thank them enough for the care they gave me, it was quite exemplary.

‘They were really good the way they communicated with me and they also showed a lot of concern for my wife because they knew she was on her own. We were able to speak on the phone each day.’

Tax adviser Alia added: ‘We have been together working from home just the two of us throughout the lockdown so it’s a really hard situation to manage emotionally when you’re suddenly on your own.’

Now Mohammed will have to be on a course of anti-coagulants for the next six months to prevent any new clots forming as the clots will hopefully be absorbed back into his body. He still has pain in his legs and gets tired easily but the headaches have gone.

Mohammed said he had been advised by doctors not to take the second AZ jab. ‘It’s just too risky for me, given what’s happened. I’m not sure about what the position would be with other vaccines, but for now I’m just concentrating on getting better. It’s frustrating that I don’t have as much energy as I did have before I got ill, but hopefully I’ll get stronger as time goes on. It’ll be a while before I start running again though.’

But he is adamant he doesn’t want his experience to put anyone off having the injection.

‘The chances of getting Covid are far, far higher than the kind of freak reaction I experienced, and Covid poses a risk to everyone around you, especially older relatives, so I would absolutely say get the jab.

‘But I do think people need to be aware of the signs to look for which could be an indication of clots forming – pain in the legs or chest, possibly headaches, breathlessness and blurred vision.

‘I was lucky that it was spotted early, and I hope anyone else in the same situation will seek medical help as soon as possible.’

The Royal London Hospital was contacted for a comment.

Regulator lists symptoms to watch for after receiving vaccine

Yesterday (April 7) the Medicines and Healthcare products Regulatory Agency (MHRA) issued a checklist, advising people to seek medical advice if they spot the following symptoms after vaccination, such as:

· unexplained pin-prick rash or bruising beyond the injection site

Also anybody with new onset of severe or persistent headache that does not respond to simple painkillers starting four days or more after vaccination should speak to their doctor.

In a statement, the agency said: ‘The MHRA’s scientific review of UK reports of extremely rare and unlikely to occur specific blood clots with lowered platelets has concluded that the evidence of a link with COVID-19 Vaccine AstraZeneca is stronger but more work is still needed.

‘By 31 March 20.2million doses of the COVID-19 Vaccine AstraZeneca had been given in the UK meaning the overall risk of these blood clots is approximately four people in a million who receive the vaccine.’

They added: ‘The MHRA recently confirmed that the evidence to date does not suggest that the COVID-19 Vaccine AstraZeneca causes venous thromboembolism without a low platelet count.

‘It is important to note that this type of blood clot together with lowered platelets can rarely occur naturally in unvaccinated people as well as in people with COVID-19 disease.’

Family's plea to help save girl, 8, after her only donor match in the world pulls out at the last minute