Moderna will partner with Melbourne’s Burnet Institute in a bid to deliver three new highly desired vaccines, including a longer-lasting COVID-19 jab that is more effective against variants.

An mRNA vaccine for malaria, a disease that kills an estimated 627,000 people worldwide each year, is also on the cards, as well as the first-ever vaccine for hepatitis C, another potentially deadly disease still thought to affect tens of thousands of Australians. 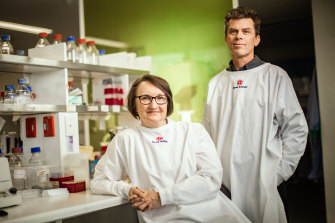 Professor James Beeson and Professor Heidi Drummer are keen to translate insights gleaned from their research into vaccines.Credit:Scott McNaughton

Spurring on the collaboration was a deal made last year that will see Moderna bring Australia’s first mRNA vaccine manufacturing facility to Victoria, the technology behind some of the most successful COVID-19 vaccines to date.

“One of the world’s best companies in producing mRNA vaccines, and in the science behind them, sets up shop in Melbourne, so we’ve jumped at the chance to connect those dots … and to see if that combination provides the breakthrough that we’re looking for,” Crabb said.

This includes joining the race to create one of the “second generation” of COVID-19 vaccines.

“We really want both,” Crabb said.

He said the vaccine development team at Burnet, led by Professor Heidi Drummer and Dr Andy Poumbourios, had a plan to do this by altering the COVID-19 spike used in the vaccine, so it was less floppy and more rigid.

“We have some of our technology and knowledge that describes how to make that ultra-stable, way more than others have been able to do, as far as we’re aware … the potency of antibodies produced by that is hopefully going to be substantially higher than you would otherwise get.”

Burnet scientists are also keen to apply their research into understanding how the immune system fights malaria in developing a more effective vaccine for the mosquito-spread disease, which is thought to kill hundreds of thousands of children under five every year.

Professor James Beeson, the head of the Burnet’s malaria immunity and vaccines laboratory, said developing a vaccine for malaria was challenging in a number of ways, partly because the disease was more common in low or middle-income countries without big budgets to spend on healthcare.

It was also a difficult disease to develop a vaccine for. He said while COVID-19 had just a handful of proteins, malaria had something like 5000.

“It’s a sophisticated organism that’s got a lot of tricks up its sleeves,” Beeson said.

Like COVID-19, hepatitis C also has an issue with variants, and Beeson said Burnet researchers had made some important advances on how a vaccine could be developed that covers the known variants.

If a vaccine were to be developed, it would be the first for the disease.

“In Australian research … there are lots of great advances, and discoveries and developments, but trying to take it through to that next step of actually finding a partner that has the capacity and technical expertise to produce a product like a vaccine, that’s really lacking,” Beeson.

Infectious diseases physician Dr Paul Griffin, who has worked on multiple vaccine trials, estimated there were about another 125 new COVID-19 vaccines in clinical trials.

He said vaccines that could be delivered through nasal spray were proving promising among a field of second-generation candidates, and that they may be used in addition to existing vaccines to help reduce the spread of infection.

He said he was optimistic that mRNA vaccines also had potential as second-generation COVID-19 vaccines, and to tackle other viruses.

Griffin said the current cohort of COVID-19 vaccines had exceeded expectations, “but they are not perfect, and there’s a large number of additional desired properties that we would like in a vaccine”.

“Of course, the main one we would like is a vaccine that reduces people’s probability of infection to a much greater degree.”

Hamilton Bennett, senior director of vaccine access and partnerships at Moderna, said in a statement: “I am impressed with Burnet’s scope of research, reaching from the laboratory and into the field, and look forward to working with Burnet to accelerate the development of their novel candidates.”

Stay across the most crucial developments related to the pandemic with the Coronavirus Update. Sign up for the weekly newsletter.