Saint Louis University has launched an investigation after a pro-life memorial was vandalized on campus.

The Saint Louis University Students for Life chapter set up a memorial designed to commemorate the lives lost to abortion on Monday, and set up 1,000 flags arranged in the shape of a cross. One flag was equal to 800 abortions, with the display representing 800,000 abortions. 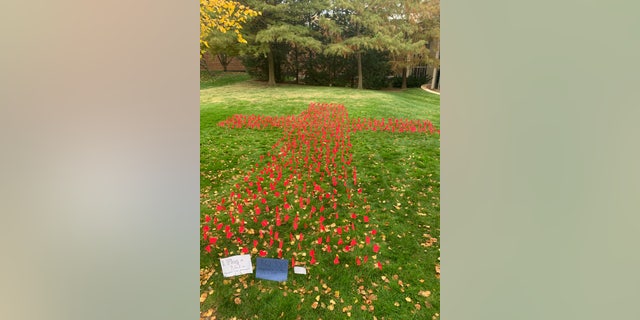 In a video posted by Students for Life, individuals can be seen ripping the flags from the ground without putting them back at around 1:00 p.m. on Monday.

“You can go to h*ll,” one of the individuals stated when asked what her name is.

“You’re a little b*tch,” another individual told the person filming the video. “F*ck you.”

“Why can’t you just leave women alone?” one of the individuals also said.

At around 9:00 p.m. on Monday night, more individuals were caught on video attempting to remove the flags from the display, but dropped them while being recorded.

“Could you guys please not touch these? These aren’t your property,” Isabelle Hotard, president of the Saint Louis University Students for Life chapter, said to the individuals.

“It is a bit of an echo chamber on [Saint Louis University’s] campus, our entire campus is extremely left leaning, so you just find a lot of people, particularly among the students in positions of authority, who will be far more tolerant of left-leaning beliefs rather than right-leaning beliefs,” Hotard said.

Students for Life member Nick Baker said he was approached by one of the individuals who attempted to remove flags from the display on Wednesday.

“You’re a disgusting misogynist, and karma is going to f*cking get you,” the individual said. “You’ll see that when you die, and hopefully you f*cking go to hell.”

“You can see my pictures, you can see how pretty I am, how good of a life I have. And what do you have? You’re a f*cking loser,” she added. “You just really enjoy your life, cause I’ll enjoy mine. And I’ll f*cking keep killing babies.”

Baker told Fox News he began recording about ten seconds into the conversation.

“When she started yelling her head off, I recognized that it was the girl from the display vandalism,” Baker said. “She approached me and began the angry confrontation. I figured it would be best to respond to her criticism with a calm demeanor.”

Lucy Gonzalez, a regional coordinator for Students for Life of America, told Fox News that incidents like this occur at colleges across the nation.

“If you want to talk respectfully, we want to listen. We know that a lot of emotion is involved with this topic,” Gonzalez said. “We would much rather have a civil dialog with them just to see where they’re at in their minds on the issue.”

A university spokesperson told Fox News that an investigation into the disruption of the display is currently underway.

You’re not my dad, Gov. Cuomo — and please stop pretending

Debate emerges over whether cash carries a coronavirus risk

Trump impeachment defense says ‘reportedly’ is not evidence of anything