Washington: The United States has not yet reached a national peak of the Omicron variant, the nation’s top doctor said, urging caution even as the explosion of cases has started to plateau in some areas.

“We shouldn’t expect a national peak in the next coming days – the next few weeks will be tough,” US Surgeon General Vivek H. Murthy said Sunday on CNN. 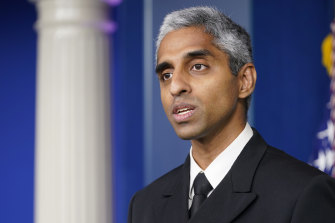 Case counts fuelled by the highly contagious variant have started to level off in some parts of the country hit early by the latest wave. In the District of Columbia and Maryland, experts said the Omicron-fuelled surge was showing signs of peaking in recent days, after a winter wave began to slow in other Northeast cities, including New York and Boston.

While that’s good news, Murthy said, “the challenge is that the entire country is not moving at the same pace. The Omicron wave started later in other parts of the country.”

The national peak of this variant, whenever it is reached, is less important than the point when the decline starts to mean relief for health systems and the return of normal activity, said Gabe Kelen, chair of the department of emergency medicine at Johns Hopkins University.

Kelen, comparing the surge to a hurricane, said in an interview that talking about the peak of the variant is like asking, “Where’s the high-water mark?”

“But it doesn’t matter – the real question is: When will the water recede?” he said. 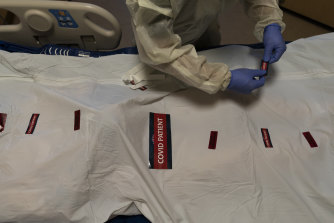 A nurse attaches “COVID Patient” stickers on a body bag of a patient who died of coronavirus in Los Angeles.Credit:AP

“We’re at such high numbers that even as we’re coming down, we’re still overwhelmed. Hospitals will still be overwhelmed.”

Even in places where case numbers are starting to slow, he said hospital visits, admissions and intensive care unit numbers “are going to stay up, probably for several more weeks”.

The seven-day average of coronavirus cases in the United States exceeded 800,000 for the first time Friday, according to data tracked by The Washington Post, exceeding that level again on Saturday and Sunday. Also on Friday, 23 states set a record for seven-day average of cases, and all but three states had hit such a record within the previous week. 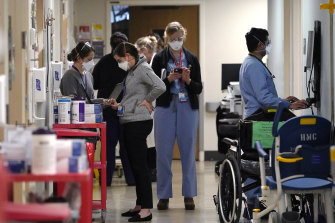 Medical workers fill a hallway in the acute care unit, where about half the patients are COVID-19 positive or in quarantine after exposure, of Harborview Medical Centre in Seattle.Credit:AP

Ahead of the weekend, the United States reached a record for coronavirus hospitalisations, with a total of 159,589 people in US hospitals with COVID-19 on Friday.

The hospitalisation count nationwide set records on six consecutive days after last week surpassing the record of 142,273 hospitalisations set January 14, 2021, during a previous peak of the pandemic in the country.

In the interview on CNN, Murthy also stressed the impact of the surge on hospital resources.

He said a lesson from this surge is that “vaccines are still working very well to keep people out of the hospital and to save their lives. That’s why we want everyone to get vaccinated, to get boosted, as soon as they can.”

Kelen predicted that “assuming nothing new happens,” health systems in some parts of the country may start to see some relief in mid-February or into March.

“The rest of January and a good piece of February are going to be tough,” he said. “Though different parts of the country will see it differently.”

Anthony Fauci, President Joe Biden’s chief medical adviser, also warned in recent days not to necessarily count on the Omicron variant to drive the coronavirus into an endemic phase.

“We do not know that – and we have to be openly honest about that,” Fauci said Monday during a virtual panel session of the World Economic Forum, when asked if this would be the year “we go from pandemic to endemic”.

Fauci explained that his definition of “endemicity” is when there is a “non-disruptive presence, without elimination.”

He described multiple phases of a pandemic, where a “control” phase would mean that “you have it present, but it’s present at a level that does not disrupt society.”

“I think that’s what most people feel when they talk about endemicity, where it’s integrated into the broad range of infectious diseases that we experience – for example cold weather upper respiratory infections, the parainfluenzas . . . the rhinovirus, the adenoviruses,” he said. “You want to get it at a level that doesn’t disrupt society.”

As for whether the Omicron variant could drive the coronavirus into that phrase, Fauci said, “I would hope that that’s the case, but that would only be the case if we don’t get another variant that eludes the immune response.”

“It is an open question as to whether or not Omicron is going to be the live virus vaccination that everyone is hoping for,” he added.

Howard Stern blasts Trump voters: ‘I hate you, I don’t want you here’