London: Faced with a potentially explosive lawsuit in a New York courtroom, Prince Andrew has opted for the tried and tested crisis strategy of pretending nothing has happened.

The Duke of York and Buckingham Palace were silent on Tuesday following news Virginia Giuffre, a victim of notorious billionaire paedophile Jeffrey Epstein, has lodged a civil suit claiming the prince sexually abused her when she was underage.

The silence will have to end at some point, though, for a royal who only has himself to blame for much of this mess. He must now choose from a series of high-risk options to handle the legal threat, with continued support from the royal family far from guaranteed. 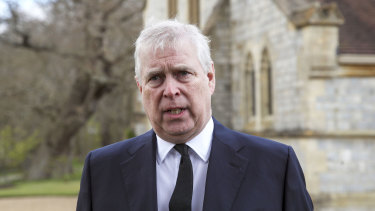 Prince Andrew speaks outside a memorial service for Prince Philip earlier this year, in a rare public appearance.Credit:PA

Giuffre, who now lives in Australia, alleges three assaults: one where Epstein and his ex-girlfriend Ghislaine Maxwell forced the-then 17-year-old to have sexual intercourse with Andrew at a London home, another where Andrew forced Giuffre to engage in sex acts against her will at Epstein’s New York mansion, and a third encounter in which the prince sexually abused the teen in the Virgin Islands.

The lawsuit was lodged under special laws introduced in 2019 to give alleged underage sexual assault victims the chance to bring forward a case which was previously not possible due to statute of limitations. The window for filing a claim ends on August 14, so this week’s development is to some extent not unexpected. The allegations against the Queen’s son also aren’t new: Giuffre first made them public several years ago.

Guiffre’s claims – and Andrew’s trainwreck attempt to counter them during a now infamous 2019 interview with the BBC – had already destroyed his career. He was forced to step back from public duties amid the fallout and his plans for a comeback tied to Prince Philip’s funeral earlier this year fell apart. He has been living quietly on the Windsor Estate in a mansion he shares with ex-wife Sarah Ferguson, who has just authored a Mills & Boon romance novel titled Her Heart for a Compass.

The 61-year-old prince was already a pariah but this lawsuit threatens to make him radioactive to the monarchy.

Of the many legal options available, Andrew has so far decided to ignore the New York legal drama. He may choose to keep doing this even if court papers are personally served on him and would potentially be within his legal rights to do so.

However, this is a highly risky strategy which could backfire. Ignoring the case or refusing to challenge its validity could see the matter proceed to a jury trial, which might uncover a treasure trove of damaging evidence. The court would have far-reaching powers to order the production of phone records and other communications.

The danger for Andrew is that even the slightest contradiction to the denials he offered during the BBC interview could be disastrous. Don’t forget the prince insisted to journalist Emily Maitlis that he can’t even remember meeting Giuffre, let alone having sex with her.

“I can absolutely categorically tell you it never happened,” he said of the alleged sexual assaults. “I have no recollection of ever meeting this lady, none whatsoever.” If the case digs up any evidence deviating from this version of events, the implications for the prince will be grave. 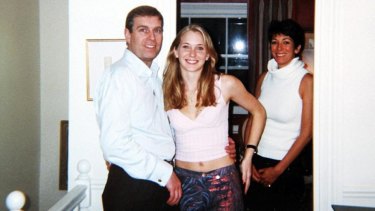 Prince Andrew pictured with Virginia Giuffre at the home of Ghislaine Maxwell (right) in London. Credit:

He might also lose the case in absentia and be forced to pay extensive damages – a disaster not just for Andrew but also the wider royal family. Another option – to settle the case outside court – will also be unattractive to Andrew because the public would almost certainly regard it as a de facto admission of guilt.

Andrew originally promised full co-operation with authorities investigating Epstein’s heinous crimes but the US attorney in Manhattan, Geoffrey Berman has claimed the prince has refused repeated requests for interview.

He could choose to participate in this new civil case brought by Giuffre but this seems highly unlikely because the BBC experience shows he melts under pressure. He also would not be compelled to take the stand because the chances of being extradited for a civil matter are basically nil (a key member of his legal team is Clare Montgomery QC, an extradition law expert).

Ghislaine Maxwell might also be called to give evidence, possibly by both sides. Maxwell will face a criminal trial in November for allegedly recruiting girls for Epstein and sometimes joining in the abuse of them. 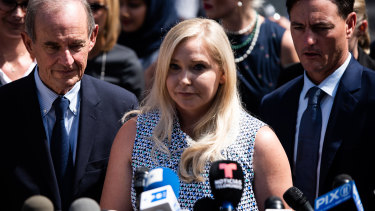 Virginia Giuffre speaking with members of the media outside in 2019.Credit:Bloomberg

There’s also no guarantee Giuffre’s lawsuit proceeds to a trial. Arick Fudali, a partner at a New York legal firm which has acted for some of Epstein’s victims, told the BBC on Tuesday there was only a “small chance” it goes to trial but said the case should be taken seriously because the lawsuit had been filed, was within the statute of limitations, and in the proper jurisdiction because one of the alleged assaults took place in New York.

“Juries are not giving Epstein the benefit of the doubt,” Fudali said. “Looking at the circumstances of this case and the imbalance of power, I would be confident if I was the plaintiff going in front of a jury.”

But for now there is silence. Marlene Koenig, an expert royal commentator, said on Tuesday it would be prudent for Buckingham Palace to issue a statement on the matter. She said even an out-of-court settlement “will mean guilt” for Andrew and suggested the prince could cease to use his titles, lose all remaining roles within the royal family, live privately and appear in public only at funerals. That summary was endorsed by Dickie Arbiter, the Queen’s former press secretary.

The Queen and Prince Charles in particular have worked hard to slim down the monarchy and make it fit for purpose. Charles was reportedly horrified by Andrew’s 2019 BBC Newsnight interview and apparently had a hand in the decision for his controversial brother to step back from public life.

The monarchy is much bigger than Andrew and it won’t hesitate to drive a stake through him should events in a New York courtroom spiral out of control.

How to get tested for coronavirus in the UK – The Sun

Was there an earthquake in Haiti?