Almost a year after the Melbourne Star stopped turning, the liquidator charged with selling one of the world’s largest observation wheels says it is making progress on the sale with “various stakeholders”.

But the Docklands Chamber of Commerce has called for faster action, saying the local business community needed certainty on the future of the tourist attraction. 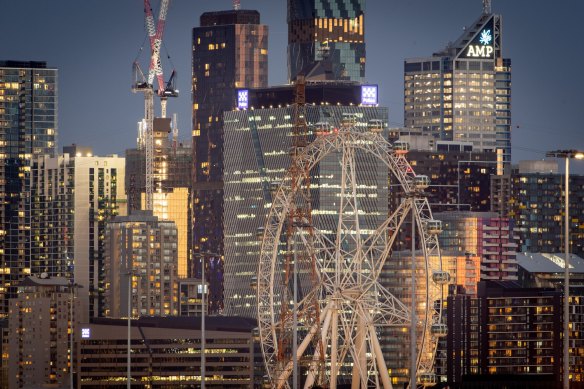 The Melbourne Star observation wheel, which has been a feature of Melbourne’s city skyline for more than a decade, was one of the city’s most high-profile victims of repeated COVID-19 lockdowns, closing last year with multimillion-dollar debt.

MB Star Properties announced the immediate closure of the wheel in September 2021, saying the pandemic-induced travel restrictions and lockdowns had made it “impossible to sustain the business”. The owners said those challenges had come on top of pre-existing difficulties, with “increased high-rise development and changes in the Docklands area”.

Weeks later, liquidator Grant Thornton filed a creditors report with the Australian Securities and Investment Commission showing the wheel had racked up more than $3.9 million in debt.

At the time, a spokeswoman said the liquidators would consider all possibilities, including selling the wheel and surrounding land or dismantling it.

Docklands Chamber of Commerce executive officer Shane Wiley said he knew of at least two consortiums that had made credible offers to buy the liquidated assets associated with the wheel, including the wheel itself.

“We want to know if it is going to stay or go or be taken down and scrapped,” he said.

“It’s been a year now and whilst the administrator needs to do their due diligence and act in what is perceived as the best interests, it’s simply taking too long. We are aware of at least two serious and concrete proposals that have been presented. The condition and aura around the wheel aren’t going to improve by waiting any further.”

Grant Thornton financial advisory head Andrew Hewitt would not confirm how many parties had made approaches about the wheel and associated assets, saying only that discussions were ongoing.

“We are continuing to progress with various stakeholders engaged in the sales process of dealing with the company’s assets, including the MSOW [Melbourne Star observation wheel],” he said.

“The current level of indebtedness has not grown significantly from that previously reported. We have not sought to adjudicate and finalise claims against the company until we have realised the assets that would allow a return on those claims.”

The $100 million observation wheel opened in 2008 under the name Southern Star but was forced to shut just 40 days later because of cracks caused by structural design problems. It was out of operation for almost five years as it was taken down and almost fully rebuilt.

The Docklands Chamber of Commerce estimates the precinct has lost 30 million visits a year due to workers not returning to their offices and the loss of international students. Wiley said this translated to missing out on hundreds of millions of dollars.