A ‘non-PC’ transport boss is boldly telling ‘snowflake millennials and social justice warriors’ not to bother applying in his tongue-in-cheek job advert – as he proclaims that those who love ‘politically incorrect banter’ will get ahead.

Trevor Shore MBE is looking to hire part-time coach drivers for family-run company Dekkabus in Poole, Dorset, but wants to weed out certain candidates before they appear for interview.

The 62-year-old shared the ad, penned by his compliance officer cousin Mark Self, on social media to reflect the company’s ‘fun’ nature and ensure they hired the right candidate for the job. 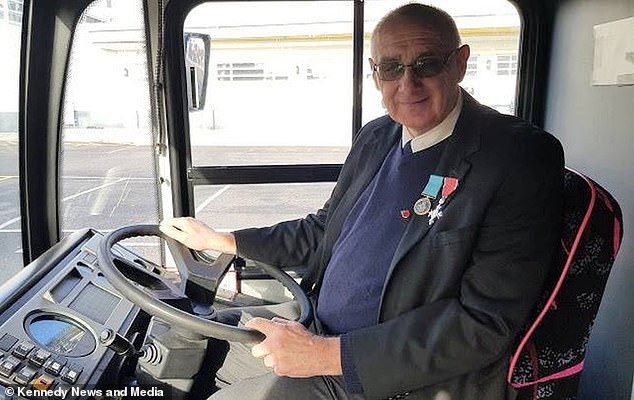 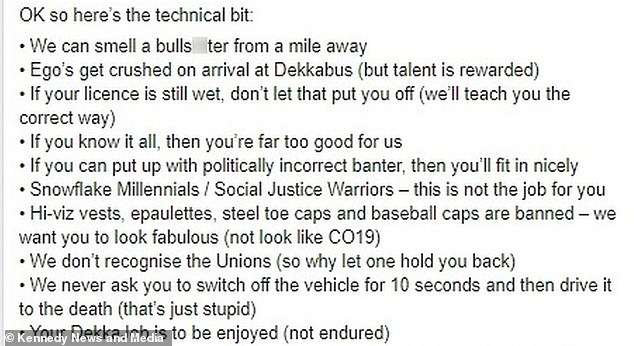 The 62-year-old shared the ad, penned by his compliance officer cousin Mark Self, on social media to reflect the company’s ‘fun’ nature

The advert begins by describing what the role entails and the rate of pay, before ruling out ‘snowflake millennials’, ‘social justice warriors’ and those who can’t handle politically incorrect banter.

Mr Shore, from Poole in Dorset, who was made an MBE for 28 years of road safety work, said: ‘Mark and I really can’t be doing with this PC world that we live in, especially me because I’m old school.

‘The things we used to do and say you can’t do now as you’d get the sack or be disciplined.

‘[We mentioned snowflakes as] you watch Coronation Street and at the end it says ‘if you’ve been affected by this please phone this number’.

‘You might as well stay indoors, brick up your houses and not go out because if you go out the front door you might see something that upsets you and that might offend you. It’s just got too much.

‘We’re a fun company and we wanted to get that across to people in the job ad.’

Dekkabus run four modern vehicles for private hire and rail replacement service and a fully-restored classic 1967 Hants & Dorset bus for weddings, which Mr Shore worked on as a bus conductor as a youngster. 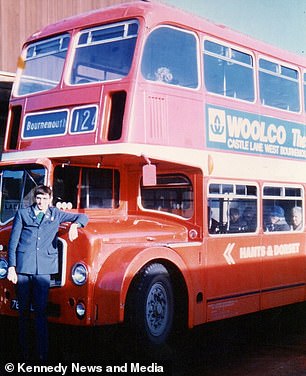 Mr Shore in 1976 when he was an 18-year-old bus conductor. He is seen posing with the bus he worked on, which he saved from a burning building before buying it 40 years later to become part of his current fleet

Mr Self, 44, said they’d had a couple of 18-year-olds complain about the advert he wrote because it was ‘inappropriate’, but said the vast majority of people loved it.

‘We mentioned people needing to be able to put up with politically incorrect banter as it’s a way of saying we need someone up for a laugh,’ he said.

‘We also need a good people person who has the ability to talk to the road sweeper who effs and jeffs and also Mrs Jones from the fine arts society.

‘Being a coach driver is a totally different beast to being a bus driver, a coach driver has to be all sorts of things – they have to be flexible, be an entertainer and a cleaner.

‘It’s important to get the right person for the job as we have to work with them, the customer has to face them and, as a company that showers their vehicles with love, we need to make sure the right person is behind the wheel.

‘We’re not interested in eco-warriors and snowflake drivers, they’re not for us. We are in no way politically correct. We’re just a fun company to work for, it doesn’t seem that people have fun anymore.

People on social media praised the tongue-in-cheek ad – with some claiming they had ‘balls of steel’ by writing and sharing it.

Nick Field wrote: ‘Dear GOD – this has to be the best job advert that’s been ever posted on social media – wish the rest of the industry had the same balls.’ 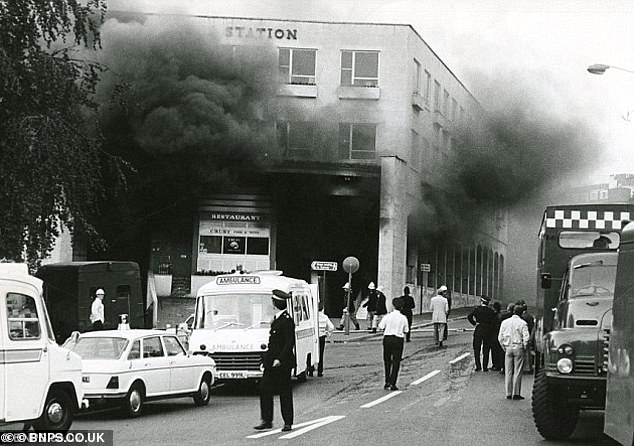 Mr Shore previously made the news in 1976 when he ran into a burning building to rescue a double-decker before spending a five-figure sum to keep it in Britain. Pictured is an image of the fire from the street

Rich Sharman commented: ‘If all driver recruitment adverts were like this the industry wouldn’t be short of drivers!’

Cameron Havel wrote: ‘This is very effective advertising! Grand job. More major companies should be like you.’

Mr Shore previously made the news when he ran into a burning building to rescue a double-decker before spending a five-figure sum to keep it in Britain.

He was then an 18-year-old bus conductor when he repeatedly dashed into a blazing bus station in 1976 to drive three of the vehicles to safety in the nick of time.

In 2016, forty years on, Mr Shore, saved one of the three Bristol FLF Lodekka double-deckers from leaving the country after buying it for £13,000.

‘If you can put up with politically incorrect banter then you’ll fit in nicely’: Coach firm boss’s unashamedly non-PC advert in full

We’re on the lookout for really useful people to do some part-time coach driving.

PCV licence is essential, as is a digital tachograph, valid driver CPC qualification and a clean DBS check.

he position is for part-time ad-hoc work, as and when our workload dictates, based at our Merley depot.

Keeping our vehicles looking awesome is very important to us.

It also includes making sure that our cabs and dashboards sparkle like a unicorn’s horn!

The driving part is a doddle. We don’t do stage carriage work so there’s no nasty ticket machines or fares to handle. We just do medium haul private hire, our fair share of Rail Replacement diagrams and not forgetting our very busy wedding special workload.

The rate of pay is an impressive £12.00 per hour from depot to depot and if you help us with emergency callouts, there’s usually a £25.00 tax free bonus too.

OK so here’s the technical bit:

* Egos get crushed on arrival at Dekkabus, but talent is rewarded

* If your licence is still wet, don’t let that put you off as we’ll teach you the correct way

* If you know it all, then you’re far too good for us

* Hi-vis vests, epaulettes, steel toe caps and baseball caps are banned – we want you to look fabulous – not look like CO19

* Your DekkaJob is to be enjoyed and not endured

If you’re on the buses and fed up of being treated like a number or work for a coach company that’s giving all the best jobs to the boss’s blue-eyed boy, get in touch for an informal chat and to arrange an interview.