Moscow: Hundreds of people lined up to pay tribute to the daughter of a leading right-wing Russian political thinker killed in a car bombing that Moscow blamed on Ukrainian intelligence.

Speaking during a farewell ceremony held at a Moscow broadcast production centre on Tuesday (Moscow time), Alexander Dugin said with his voice breaking that his 29-year-old daughter, a commentator with a nationalist Russian television channel, “died for the people, died for Russia”. 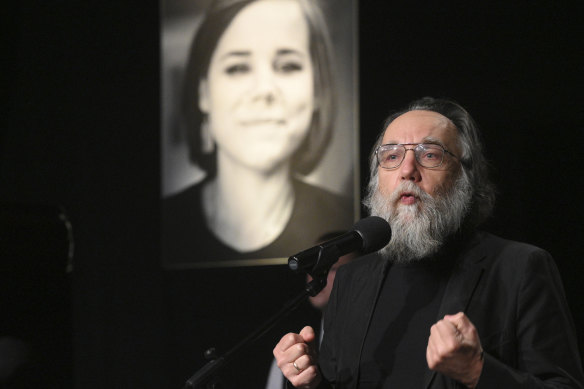 Alexander Dugin speaks during the final farewell ceremony for his daughter Daria Dugina in Moscow, Russia.Credit:AP

Darya Dugina was killed when a remotely-controlled explosive device planted in her SUV blew up on Saturday night as she was driving on the outskirts of Moscow, ripping the vehicle apart and killing her on the spot, authorities said.

Her father, a philosopher, writer and political theorist who ardently supports Russian President Vladimir Putin’s decision to send troops into Ukraine, was widely believed to be the intended target. Russian media quoted witnesses as saying that the SUV belonged to Dugin and that he had decided at the last minute to travel in another vehicle.

During the memorial service at the Ostankino television centre that topped newscasts on state television, the 60-year-old Dugin shared what he said were his daughter’s last words to him, spoken at a nationalist festival they both attended just before her death: “Father, I feel like a warrior, I feel like a hero. I want to be one, I don’t want any different fate. I want to be with my people, with my country.”

Speaking at a separate event on Tuesday, Russian Foreign Minister Sergey Lavrov denounced Dugina’s killing as a “barbaric crime for which there is no forgiveness”.

The car bombing, unusual for Moscow since the gang wars of the turbulent 1990s, triggered calls from Russian nationalists to respond by ramping up strikes on Ukraine. Ukraine has denied any involvement in the bombing.

Oleksiy Danilov, the secretary of Ukraine’s National Security and Defence Council, reaffirmed the denial late Monday, saying that “our special services have no relation to that”.

Leonid Slutsky, the head of the Foreign Affairs Committee of the lower house of Russia’s parliament, attended Tuesday’s farewell ceremony for Dugina. Slutsky, who took part in several rounds of talks with Ukrainian negotiators in March, indicated the killing would have repercussions for the conflict in Ukraine. 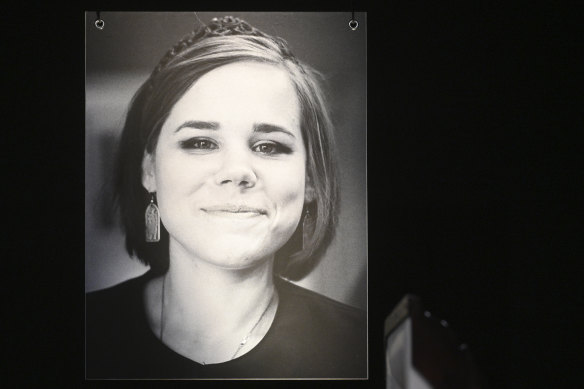 A portrait of Daria Dugina is seen as relatives hold her final farewell ceremony in Moscow.Credit:AP

“We see that Kyiv isn’t inclined to have talks, and my own position as a member of the negotiation team is that it would be hard to engage in talks after that horrible tragedy,” he said.

Putin on Monday sent a letter of condolences to Dugin and his wife, denouncing the “cruel and treacherous” killing and saying that Dugina “honestly served people and the Fatherland, proving what it means to be a patriot of Russia with her deeds.” He posthumously awarded Dugina the Order of Courage, one of Russia’s highest medals.

Russia’s Federal Security Service, or FSB, the main successor to the KGB, said Dugina’s killing was “prepared and perpetrated by the Ukrainian special services”.

The FSB said that a Ukrainian citizen, Natalya Vovk, carried out the killing after arriving in Russia in July with her 12-year-old daughter and renting an apartment in the building where Dugina lived in order to shadow her. It said that Vovk and her daughter were at the nationalist festival that Dugin and his daughter attended.

The agency said that Vovk drove to Estonia after the killing, using a different license plate for her vehicle. On Monday, the FSB released videos from surveillance cameras purportedly showing her entering and leaving Russia, and also a close-up of her allegedly in front of the entrance to a Moscow apartment building where Dugina lived and where Vovk rented an apartment.

The FSB also posted pictures of her vehicle with different license plates.

Estonian Foreign Minister Urmas Reinsalu dismissed the Russian claim, saying in televised remarks that “we regard this as one instance of provocation in a very long line of provocations by the Russian Federation, and we have nothing more to say about it at the moment”.

Reinsalu said the Kremlin is attempting to pressure Estonia over its support for Ukraine during the current conflict.

“Why did Estonia experience the biggest cyber attacks since the Bronze Soldier night?” Reinsalu said, referring to a recent foiled cyber attacks on both public and private sector institutions in Estonia, after the country removed a controversial Soviet-era tank monument from Narva, at the Estonia-Russia border.

Estonia, along with Baltic neighbours Lithuania and Latvia, have been adamant and vocal in their support for Ukraine since Russia launched its invasion of the country in February. Estonia has also denied Russians visas to visit and urged other European nations to do the same.

Dugin, dubbed “Putin’s brain” and “Putin’s Rasputin” by some in the West, has been a prominent proponent of the “Russian world” concept, a spiritual and political ideology that emphasises traditional values, the restoration of Russia’s global influence and the unity of all ethnic Russians throughout the world.

Many Russian analysts stress that Dugin is not in Putin’s inner-circle and is likely better known outside of Russian than within. 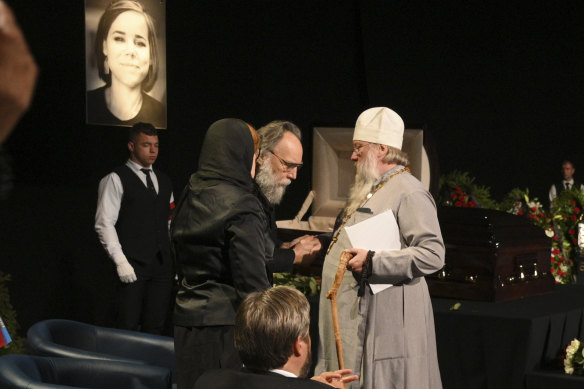 Philosopher Alexander Dugin (centre) speaks with a priest during the final farewell ceremony for his daughter Daria Dugina in Moscow.Credit:AP

Dugin helped popularise the “Novorossiya,” or “New Russia” concept that Russia used to justify the 2014 annexation of Ukraine’s Crimean Peninsula and its support of separatist rebels in eastern Ukraine. He has urged the Kremlin to step up its operations in Ukraine.

Dugin has also promoted authoritarian leadership in Russia and spoken with disdain of liberal Western values. He has been slapped with US and European Union sanctions.

His daughter expressed similar views and had appeared as a commentator on the TV channel Tsargrad, where Dugin had served as chief editor.

Dugina herself was sanctioned by the US in March for her work as chief editor of United World International, a website that Washington has described as a source of disinformation.