British pensioner, 81, who stunned nation with intimate details of her sex life with Egyptian toyboy, 36, repairs family rift with her sons so she isn’t forced to spend Christmas alone

A British pensioner, 81, who shocked the nation with graphic description of her sex life with her Egyptian toyboy, 36, has managed to repair the family rift with her sons so she won’t spend Christmas alone.

But she has been able to repair her relationship with her sons Stephen, 54, and Darren, 53 so she isn’t forced to spend Christmas alone.

Iris Jones, 80, from Somerset, who left This Morning viewers shocked by sharing graphic details of her sex life with her Egyptian toyboy has married her lover, Mohamed Ahmed Ibriham, 35

The couple’s relationship hit the spotlight earlier this year when Iris went on ITV’s This Morning to discuss the huge age gap and ended up revealing details of their sex life.

The 80-year-old made hosts Holly Willoughby and Philip Schofield blush earlier this year after admitting that their first night of passion, which included an ‘entire tube of KY jelly’, left Iris ‘saddle sore’.

Iris admits that speaking about her love life has caused trouble in her relationship with her sons but they have all decided to put their differences aside to spend Christmas together.

As Mohamed has not been able to secure the paperwork to move to the UK, Iris will be spending the festive season with her family.

Iris, who married Mohamed in November, said to the Mirror: ‘My boys are now accepting of the fact that this is genuine. We genuinely love one another.

‘I will be spending Christmas with Stephen, his wife and my step-children. But I will still be wearing a mask and not touching any surfaces. I don’t want to be on my own.’

Iris who has been divorced for 40 years first struck up a conversation with Cairo native Mohamed, last summer on a Facebook group exploring atheism.

He initially declared love for her through social media and then said his feelings were confirmed when he saw Iris for the first time at Cairo airport last November. 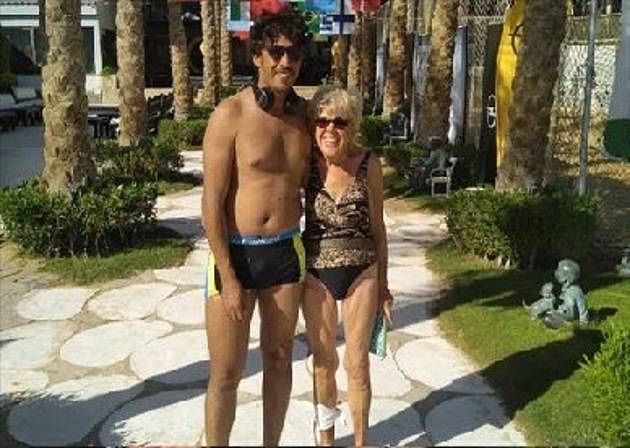 After meeting last summer online, within a fortnight, Mohamed had professed his love and by November, Iris had arranged to fly over to Cairo to meet him in person

Speaking to MailOnline earlier this year, he recalled: ‘I was very nervous but the moment I laid eyes on her I knew that it was true love. I’m a very lucky man to have found a woman like this.’

Mohamed worked as welding inspector but gave up his job to spend time with Iris when she came to Cairo.

He lives in a three-room house with his parents plus two sisters and a brother who are all younger than him, but vehemently denied he was with Iris for her money or a passport to Britain.

Mohamed said: ‘I don’t care where we live or how rich or poor she is, I just want to be with Iris.

‘At the end of the day, which country she wants to make her home is her choice; it can be either Britain or Egypt.

‘People think I am with her for all the wrong reasons. I know Britain is a beautiful country and a lot of people want to go there but I’m not bothered. I’m prepared to live with her anywhere in the world.’

Iris said: ‘I didn’t think this would happen at my age – falling so deeply in love with someone half my age – but you can’t help who you fall in love with.

‘Age is of no relevance whatsoever. I go from being so happy when we’re together to the absolute depths of misery when we’re apart.’

Earlier this year Iris spent three months with Mohamed in Egypt but says the heat is not good for her health.

She returned to her home at Weston-super-Mare, Somerset on December 11.

She added: ‘I have told Mohamed he has to come here to see me but if he is not granted a visa, I don’t know what’s going to happen. He wants to come over here to look after me.’

Coronavirus will still be killing up to 85 Brits a DAY at end of July, experts claim