Home » Philippines minister to China: 'Get the f*** out' of South China Sea

‘China… GET THE F*** OUT!’ Philippines foreign minister blasts Beijing for ‘illegal’ activity in the disputed South China Sea

The Philippines foreign minister has warned Beijing to ‘get the f*** out’ of a disputed area of the South China Sea amid an escalating war of words between the countries.

Teddy Locsin Jr sent the expletive message on Monday as the Philippines foreign ministry complained that Chinese coast guard vessels have been harassing their own ships near a disputed island in the sea.

‘China, my friend, how politely can I put it? Let me see… GET THE FUCK OUT,’ Locsin said in a tweet from his personal account.

‘What are you doing to our friendship? You. Not us. We’re trying. You. You’re like an ugly oaf forcing your attentions on a handsome guy who wants to be a friend; not to father a Chinese province…’, Locsin said.

Teddy Locsin Jr, the foreign minister of the Philippines, has told China to ‘GET THE F*** OUT’ of the South China Sea in an angry tweet 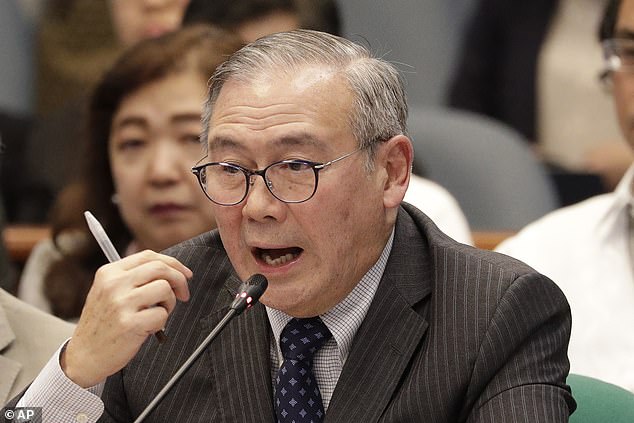 Asked about his use of language, Locsin said later that ‘usual suave diplomatic speak gets nothing done.’

His department has lodged dozens of protests in recent weeks prompted by what it calls repeated and illegal incursions by Chinese vessels into Philippine waters.

The latest row was sparked by confrontations between rival coast guards around the Scarborough Shoal – an uninhabited island claimed by both nations.

In the latest incident, the Department of Foreign Affairs said it ‘has protested the shadowing, blocking, dangerous maneuver and radio challenges by the Chinese coast guard of Philippine coast guard vessels conducting legitimate maritime patrols and training exercises’ from April 24 to 25 near Scarborough Shoal.

The island is surrounded by rich fishing waters which were effectively seized by China in 2012 after a standoff between Chinese and Philippine fishing boats.

The department said it also protested ‘the incessant, illegal, prolonged and increasing presence of Chinese fishing vessels and maritime militia vessels in Philippine maritime zones’ in the disputed waters.

It said hundreds of Chinese vessels have been spotted by Philippine law enforcement agencies from January to March this year in areas around Scarborough Shoal and Philippine-occupied Thitu Island, which Filipinos call Pagasa.

The Chinese Foreign Ministry has asked the Philippines to respect what it calls Chinese sovereignty in the disputed waters and ‘stop actions complicating the situation and escalating disputes.’

China claims virtually all of the South China Sea, a vast area of ocean bordered by Malaysia, Singapore, Vietnam, Indonesia, the Philippines and China, through which $3 trillion of ship-borne trade passes each year.

In 2016, an arbitration tribunal in The Hague ruled China’s, which Beijing bases on its old maps, was inconsistent with international law.

The escalating feud between Manila and Beijing started after more than 200 Chinese vessels suspected by Philippine authorities to be operated by militias were spotted in early March at Whitsun Reef.

The Philippine government demanded the vessels leave, then deployed coast guard vessels to the area.

China said it owns the reef and the Chinese vessels were sheltering from rough seas.

Many of the Chinese vessels have left Whitsun, about 175 nautical miles (325 kilometers) west of the Philippine province of Palawan, but several have remained moored in the area, part of a shallow atoll partly occupied by China and Vietnam.

The Philippine government says the reef is within an internationally recognized offshore zone where Manila has exclusive rights to exploit fisheries, oil, gas and other resources.

On Sunday, the Philippines vowed to continue maritime exercises in its EEZ in the South China Sea in response to a China demand that it stop actions it said could escalate disputes.

As of April 26, the Philippines had filed 78 diplomatic protests to China since President Rodrigo Duterte took office in 2016, foreign ministry data shows.

‘Our statements are stronger because of the more brazen nature of the activities, the number, frequency and proximity of intrusions,’ Marie Yvette Banzon-Abalos, executive director for strategic communications at the foreign ministry, said.

Duterte for the most part has pursued warmer ties with China in exchange for Beijing’s promises of billions of dollars in investment, aid and loans.

While the Philippine leader still considers China ‘a good friend’, he said last week: ‘There are things that are not really subject to a compromise.’

BioNTech to seek approval for Covid jabs for younger children