Boris Johnson will learn today if he faces a criminal investigation into claims he gave special treatment to American businesswoman Jennifer Arcuri while he was Mayor of London.

Ms Arcuri accompanied Mr Johnson on three official trade missions despite not qualifying as a delegate and her companies received £126,000 in public money. At the time they were allegedly having a four-year affair which he failed to declare.

The Independent Office of Police Conduct has been investigating the claims for eight months and will announce at noon today whether it will recommend a criminal probe, in what would be a major headache for the now-PM. 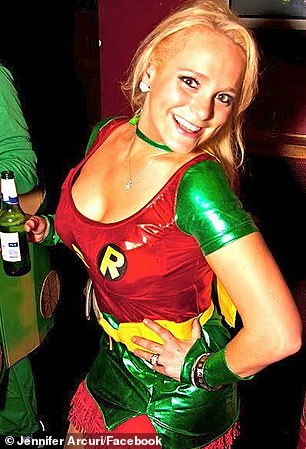 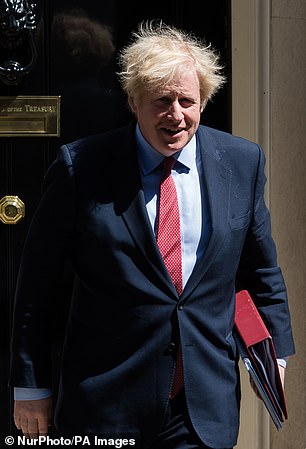 Jennifer Arcuri (left) accompanied Mr Johnson (seen today outside No10) on three official trade missions despite not qualifying as a delegate and her companies received £126,000 in public money

The IOPC said: ‘The IOPC will be announcing its decision as to whether or not it will launch a criminal investigation into allegations that Boris Johnson used his position while Mayor of London to benefit and reward American businesswoman Jennifer Arcuri.’

Ms Arcuri, 35, has admitted hosting the thrice-married 55-year-old at her flat in Shoreditch, east London, which featured a nightclub dancing pole, but has repeatedly refused to answer questions about sex.

At the time Mr Johnson was married to barrister Marine Wheeler, the mother of four of his children, although Ms Arcuri said the visits stopped after he became Foreign Secretary.

Ms Arcuri insists she and Mr Johnson ‘did nothing wrong’ and has previously said: ‘I had every right to be on those trips as a legitimate businesswoman and stand by everything that happened because these allegations are completely false.’

The IOPC began an investigation on the basis that Mr Johnson was the equivalent of London’s police and crime commissioner at the time and Ms Arcuri agreed to give evidence ‘to clear the matter up’. The announcement will be at noon today.

Mr Johnson has refused to answer questions about what happened but claims he acted with ‘full propriety’ and had ‘no interest to declare’. He is also facing a standards investigation by the London Assembly’s oversight committee. 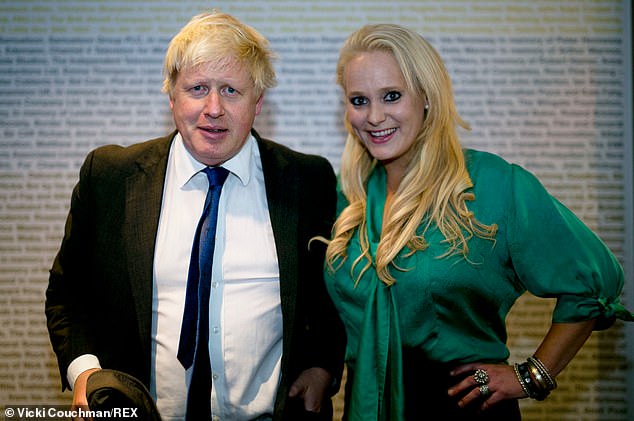 Ms Arcuri, 35, has admitted hosting the thrice-married 55-year-old at her flat in Shoreditch, east London, which featured a nightclub dancing pole, but has repeatedly refused to answer questions about sex. They are pictured together in 2014

Ms Arcuri spoke about her ‘very special’ relationship with Mr Johnson in an astonishing series of TV appearances last year.

Ms Arcuri swerved queries about her relationship with Mr Johnson, telling GMB hosts Piers Morgan and Susanna Reid in December last year that she did not want to ‘be pressured into admitting’ to anything about her links to the Prime Minister.

Later, speaking to Victoria Derbyshire, Ms Arcuri insisted Mr Johnson did not do her any ‘favours’ but said she wished he had declared her as an interest if it could have ‘saved me this entire embarrassment and humiliation’.

She said: ‘I would love an apology for acknowledging the fact that given all those years, you know, that I was on the ground, hustling and working as a student. I mean he saw my arc, he saw my progression as a young woman, graduating and becoming, you know, a mature entrepreneur.’

She also accused the Prime Minister of feeding her to the wolves. Asked if Mr Johnson ‘had bigger fish to fry’, she said: ‘That’s what you tell somebody when you meet them for the night, you don’t know them, you haven’t spent the hours with them, the investment into another person.

‘And the fact that I’m called out, just on GMB, because ‘why I am here if I’m not here to admit the affair?’

‘Well wait a minute I’m not allowed to be upset because somebody that was very much a part of my life, who knew what I stood for, the calibre and integrity and merit that I work at. I mean all these things he knew and he sat back, why?

‘He didn’t have to ignore me, it could have been a 30-second phone call, just to let me know that he’s acknowledging the fact that he, while he gets to be prime minister gets to feed me to the wolves – and I find that really disturbing.’ 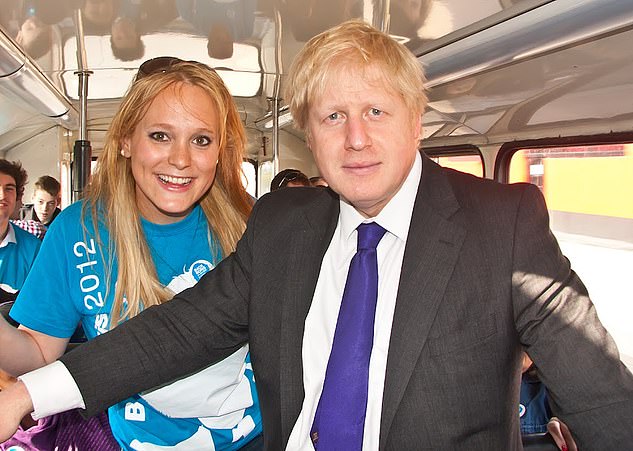 Ms Arcuri with Mr Johnson on a double-decker bus in 2012, when he was Mayor of London