Police arrest boyfriend, 22, on suspicion of murdering City University student, 19, who was found dead with severe neck injuries in her London halls

Police have arrested the 22-year-old boyfriend of a City University student who was found dead with severe neck injuries in her London halls.

Maher Maaroufe was arrested this afternoon in Clerkenwell on suspicion of murder and assault on police.

Sabita Thanwani, a British national, died at Arbour House in Sebastian Street after she was found with severe neck injuries, police said.

A manhunt was launched by detectives in a bid to trace Maaroufe who they believe had been in a relationship with Sabita.

The Met Police have released a CCTV image of Maher at the student accommodation on Saturday morning.

The Tunisian national, who is not a student, is known to travel and has links across London and Cambridgeshire. Police say he has since shaved his head and beard.

Police said that although formal identification is yet to take place, Sabita’s family have been informed and are being supported by specialist officers.

A special post-mortem examination will be arranged in due course. 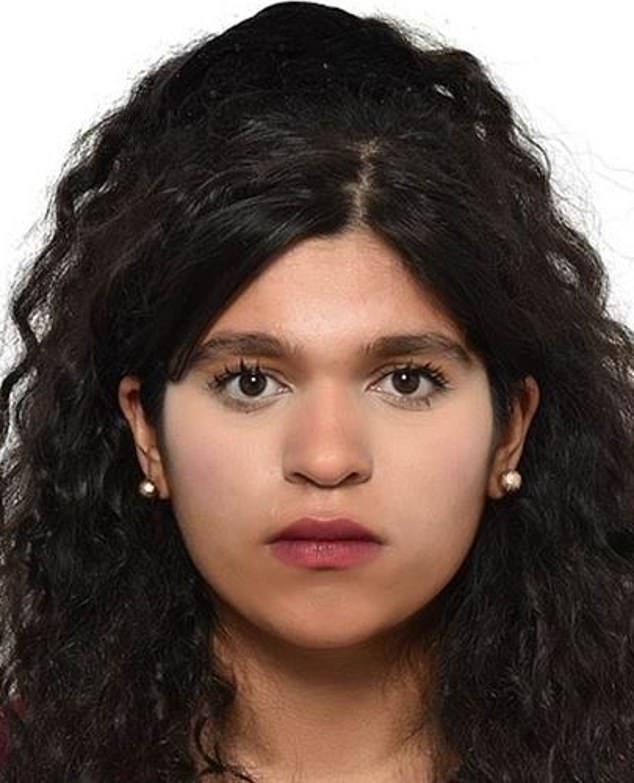 A 19-year-old student who was murdered at student accommodation in London has been named as Sabita Thanwani, a British national who was studying at City of London University 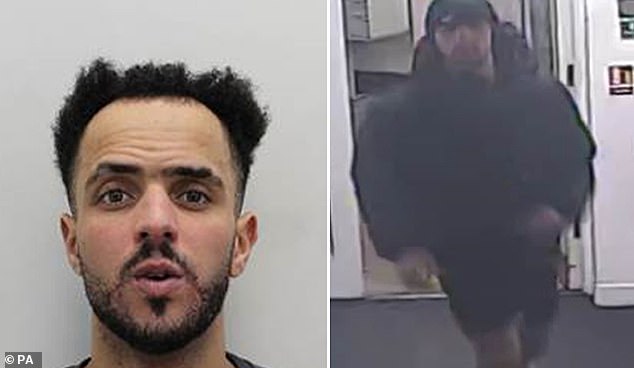 Police wereappealing for help to find Maher Maaroufe, 22, (pictured left and, right, at the Arbour House where Sabati was killed) who they believe had been in a relationship with Sabati

Detective Chief Inspector Linda Bradley who leads the investigation said: ‘I would like to thank everyone for publicising and sharing our appeal to trace Maaroufe.

‘Sabita’s family have been updated with this development and continue to be supported by specially trained officers. Our deepest condolences are with them.

‘I would ask everyone to respect their privacy at this indescribably devastating time for them as they come to terms with Sabita’s murder.’

Officers were first called at around 5.10am on Saturday, to reports of a woman injured at Arbour House, student accommodation in Sebastian Street, Clerkenwell.

The London Ambulance Service and officers attended and found Sabita, believed to have been a psychology student at City, University of London, gravely injured.

Despite the efforts of the emergency services, the 19-year-old was pronounced dead at the scene.

Officers said anyone who sees Mr Maaroufe should not approach him but should call 999 immediately.

The 19-year-old woman, who was reportedly a first year student, is believed to have been killed on the fifth floor of a block of flats owned by Unite Students.

Her neighbour Leona Sigmud, 20, described her as ‘just a normal student’ who ‘kept herself to herself’.

The music student said: ‘She was a normal student, there was nothing special about her. I saw her in the hallways but I never really spoke to her. 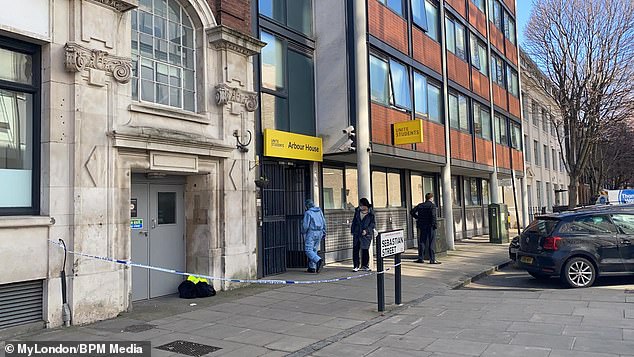 The Metropolitan Police said they were called to reports of a woman injured at Unite student accommodation in Sebastian Street, Clerkenwell, on Saturday 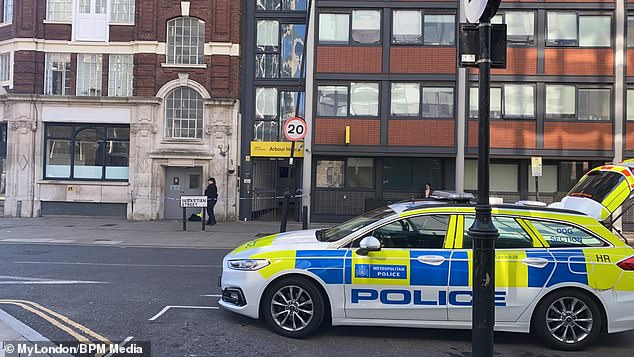 ‘Of course she was nice and was never rude. I didn’t know her personally. I don’t think she was British. When I heard someone was murdered I didn’t believe it at first. I thought it was gossip. We are all feeling rather shaken up. This doesn’t happen every day.’

Neighbour Arsh Srivastara, 21, who is a business student said: ‘At around 5.45am I heard a voice that sounded like a grown man.

‘I heard the fire alarm go off and I heard someone running out of a back ground floor exit near where I live. I thought it was the suspect.

‘After that the police showed up around half an hour later. They have been investigating ever since. I heard them talking about someone trying to escape through the hallway door. 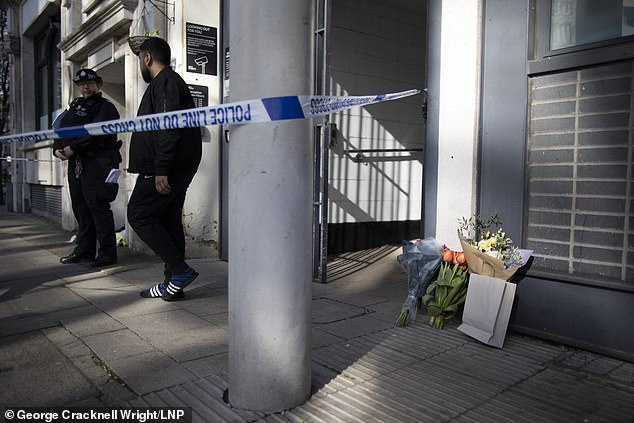 ‘I didn’t know anything about her until today. She lived on the sixth floor.’

Flowers were left at the scene while distraught residents filed in and out of the student housing. One pair of girls, who were too upset to talk about what happened, hugged and comforted each other outside the building.

One resident, who did not want to be named, said the building had lax security which only ran from 12pm-8pm on weekdays.

The finance student, 19, added: ‘I saw the police in the morning and there were helicopters. I am completely shocked and obviously traumatised.’

Detective Chief Inspector Linda Bradley, said earlier: ‘We believe the victim is a student who was studying at City, University of London.

‘Early indications so far suggest that the victim had been in a relationship with Maaroufe and that they had been together that evening. 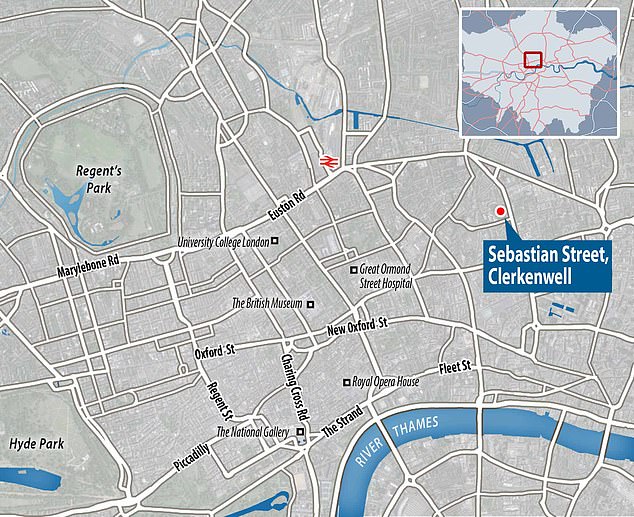 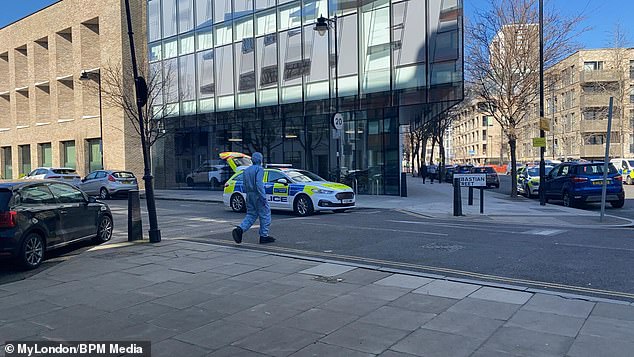 Pictured: Forensic officers on scene at Arbour House halls of residence after a student died

Speaking at Islington Police Station, Chief Inspector Adam Instone said: ‘Arbour House is a student accommodation and I know there will be great sadness and deep concern among the local people and the student community.

‘I share that sadness and concern and I can assure them that a thorough homicide investigation is under way, led by skilled and experienced detectives who will work tirelessly to identify and arrest whoever is responsible.

‘If you have any concerns about safety in and around the Clerkenwell area, please speak with those officers.’

A Unite Students spokesperson said: ‘As this remains an on-going police incident, we are unable to comment on their investigation.

‘Our priority at this time is the safety and wellbeing of students at Arbour House. We are working closely with the police and City, University of London.’

A spokesperson for City, University of London said: ‘As a university, we will do everything we can to support our students and staff and we will continue to fully support the police with their investigation.

‘We are working closely with Unite Students who own and operate Arbour House.’

The Black Women Behind The Biden-Harris Campaign