Have you been burgled? Now police hope you’ll use an app to solve it for them by becoming an online ‘DIY detective’

Police are developing technology that could see crime victims use their smartphones to gather evidence, interview witnesses and identify suspects.

A mobile app would allow members of the public to report minor offences without having to speak to an officer or go to a station.

Police chiefs believe the app would make it quicker and simpler to report crime. However, The Mail on Sunday can reveal that the MyPolice app would also ask victims to use their phones to perform many of the tasks traditionally carried out by law-enforcers.

The public would be encouraged to send in crime-scene photos and gather statements from possible witnesses. Documents seen by this newspaper confirm that senior officers predict the system would make life easier for officers, concluding: ‘Self-serving public can reduce the demand on policing.’ 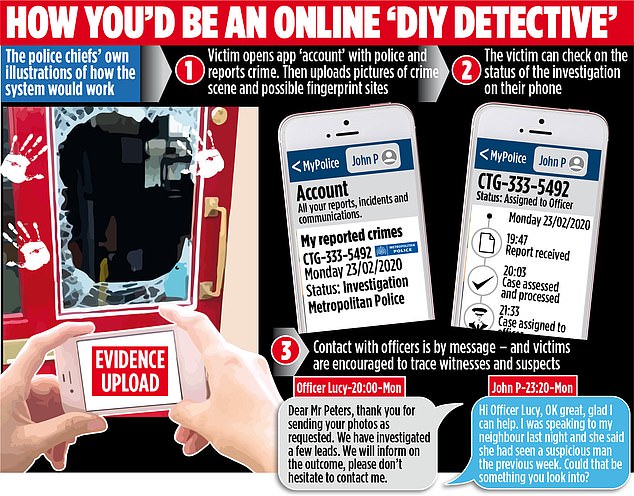 Last night critics warned of a loss of faith in the criminal justice system. Victims’ Commissioner Dame Vera Baird QC said app users were being given instructions on becoming a ‘do-it-yourself detective’.

She added: ‘When someone reports a burglary you cannot treat it in the same way as filling in a tax return.’ As well as sending in digital evidence such as photos, victims could also be asked to write their own witness statements.

With their own personal accounts, they could exchange messages with investigating officers and follow their instructions.

In one astonishing example presented to police chiefs, a burglary victim helps track down a possible eyewitness, hands the details to officers and takes pictures of the break-in. Details of the project, revealed for the first time today, were presented to a group of police leaders known as the Digital Policing Board last May.

Those signing up for an account on MyPolice would be able to report a crime or lower-level incident such as antisocial behaviour to any force in England and Wales. They would get a case reference number and updates on the progress of the investigation, but would be expected to help out themselves.

In the example case seen by police bosses, the burglary victim uses his smartphone to take a photo of a broken house window before posting it on an ‘evidence upload’ feature of the app.

The portal allows an officer to message the homeowner. The victim says a neighbour had seen a suspicious character nearby and is asked by the officer to provide contact details. The app also allows police to tell the victim there is ‘action required’ – in this example to let a forensics team visit.

And the feature can provide local crime figures and broadcast details of wanted suspects or missing persons. Police IT experts designed a prototype app after finding ‘strong public appetite to receive and exchange information with the police through digital channels’.

Sources said it is hoped to roll out the system nationwide.

Figures obtained by this newspaper reveal that 20 forces – almost half of the 43 across England and Wales – now encourage victims to report crimes online rather than calling. Analysis carried out by digital policing teams shows that in 2018-19 alone, six forces saw a 25 per cent drop in 101 calls and saved £1.4 million through victims reporting crimes online instead.

Yesterday, South Wales crime tsar Alun Michael said it was vital that police forces did not get rid of traditional ways for victims to contact them. He added: ‘If people are choosing to do things online that is more efficient for the police, but what you can’t do is say, “That’s the only way you’ve got.”

‘If you offer new choices to people who have got the technological ability, the other side of the deal is maintaining other ways to contact police.’ Tory backbencher David Morris said: ‘This app would cut the police’s workload but it is not clear how it would help elderly or vulnerable victims of crime.’

Last night the National Police Chiefs Council said the project was a ‘positive’ development – but had been temporarily put on hold through lack of funding.

A spokesman insisted: ‘It’s simply a reporting tool and nothing more. Investigative work would always be carried out by officers.’

Julian Assange's fiancee is seen outside court with famous lawyer