Police are warning wealthy people not to flaunt their £200,000 watches in public as their anti-moped muggers unit prepares to ram the criminals before they can strike again.

The Scorpion Team, a Metropolitan Police unit, are deployed in marked cars and BMW motorbikes, and catch criminals who use motorbikes, mopeds and electric bikes to commit robberies.

These perpetrators often carry weapons including knives, machetes and hammers.

Police officers who are part of the team, including PC Stu MacPherson and PC Vicky Blanks, spend weeks on courses learning how to pursue people, so that they can whizz through the busy London streets and catch them.

Officers use ‘tactical contact’ which means that they use their cars to ram the criminals off their vehicles.

The Scorpion Team often deal with false alarms. But yesterday morning, officers were able to intervene and arrest a gang who had followed a man in a taxi he was in and tried to take his watch.

Earlier, another attempt was made to steal a £16,000 Hublot watch by a separate criminal who was arrested and linked to a different incident in July where a £100,000 watch of the same make was taken. 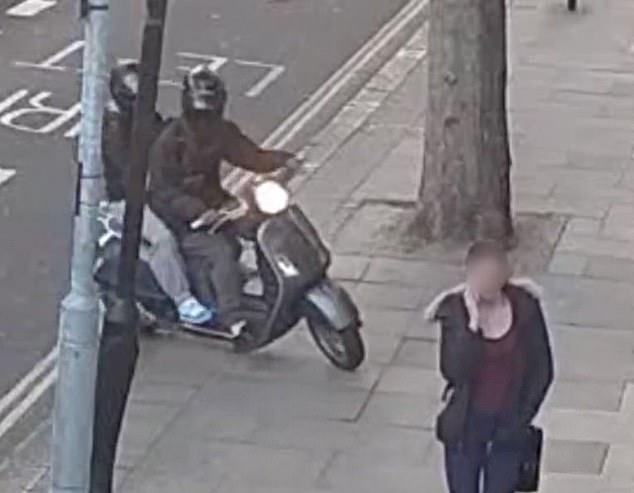 The Scorpion Team, a Metropolitan Police unit, are deployed in marked cars and BMW motorbikes, and catch criminals who use motorbikes, mopeds and electric bikes to commit robberies. Pictured: Members of a gang who used mopeds to carry out more than 100 robberies in less than three weeks earlier this year

Speaking to The Times, PC MacPherson and PC Blanks were preparing for another chase after they were called about an armed robbery on the King’s Road.

But when they were told that the crime happened at 9am, hours ago, PC Macpherson explained: ‘We need people to report this stuff straight away, as soon as it happens. We’re around the corner, we could have deployed straight away and got them.’

For the officers, details of a possible offender and speed are crucial. PC Blanks said that it is also part of their job to decide whether to use ‘tactical contact’, often using it if there is an imminent threat or risk of harm to the public.

It’s not an easy job, with criminals often speeding down miniscule alleyways and busy London streets in a bid to slip out of the police’s view.

To make their lives easier, the Scorpion Team have motorbikes that can be snuck around more easily and give officers a higher chance of catching the criminals.

Even so, sometimes it can be really challenging to have any chance of getting the robbers.

One robber, who had been on a spree in Hammersmith, west London, continually defied capture by MacPherson and the team.

This was because he would speed through a miniscule gap in a line of concrete flower beds at 40 miles per hour- these were less than half a metre apart.

However, as bike robberies steadily increase, the specialised Scorpion team have become more aware of some of the criminal tactics used to steal items of value.

Officers are trained to spot the behaviour, which includes driving past the victim to scout out jewellery and watches they are wearing.

Additionally, they now know that the perpetrators often carry out a string of attacks in a row.

This means that if they receive an immediate 999 call from the victim, there is a higher chance of them catching the perpetrator if they move on and try and pinch any valuables nearby.

A third of the attacks took place in the affluent areas of Chelsea, Belgravia and the West End.

The central borough command unit covers Westminster, Kensington and Chelsea and Hammersmith and Fulham, and reported 42 watch robberies in the month to May 30. 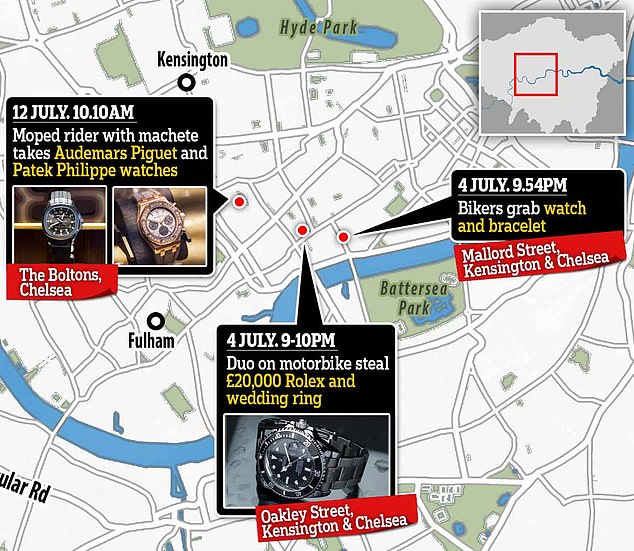 A map showing the increased number of watch thefts in July across London. In the space of eight days there were three watch robberies

In June there were then 67 offences which was a 60 per cent increase.

On July 12 a couple was followed by a moped rider who threatened them with a machete in broad daylight at 10.10am around the Boltons Conservation Area in Chelsea.

Just two days later a woman was threatened with a knife by two people on a motorbike and was forced to give them her watch and bracelet at 9.45pm in Kensington and Chelsea.

And on July 4 two people on a motorbike knocked down a man in his 50s before getting a knife out and stealing his Rolex watch, believed to be worth around £20,000, and his wedding ring between 9 and 10pm in Kensington and Chelsea.

Detective Inspector Treasa O’Donoghue, who oversees the Scorpion team, said: ‘We’ll be in and around the area, we then hear a call come out. The units are there to respond very quickly and ultimately try and arrest those individuals on the moped. So they will often pursue them.’ 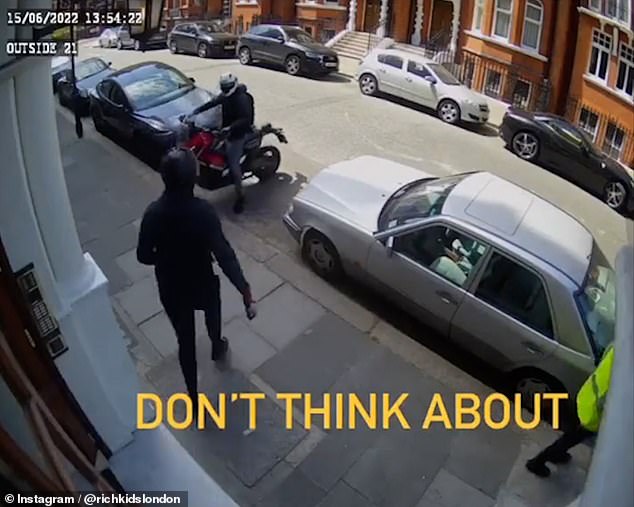 The Met is asking people to be vigilant and aware of their surroundings due to the increase in attacks. Pictured: A West London couple are robbed by moped thieves

Now, the Met is dealing with the increase in attacks by asking victims and witnesses to call the police as quickly as possible so that the Scorpion teams can be deployed and more quickly arrest perpetrators.

Their advice is to remain vigilant and for people to be aware of their surroundings as well as keeping valuables out of sight.

Officers also ask that people know their routes home so that they do not need to use their phones on the road as many perpetrators will grab the devices out of the hands of unaware victims.

DI O’Donoghue said that people are wearing incredibly valuable watches which can be up to £200,000 and used the analogy of people getting the same amount of cash from the bank.

She added that in that instance, there would be no one walking along the road with that quantity of cash.

According to the officer, criminals will grab the watches as they are ‘big, blingy and easy to see’ and she has advised vigilance.

She emphasised that she was not telling people to stop wearing watches but urging them to be vigilant.