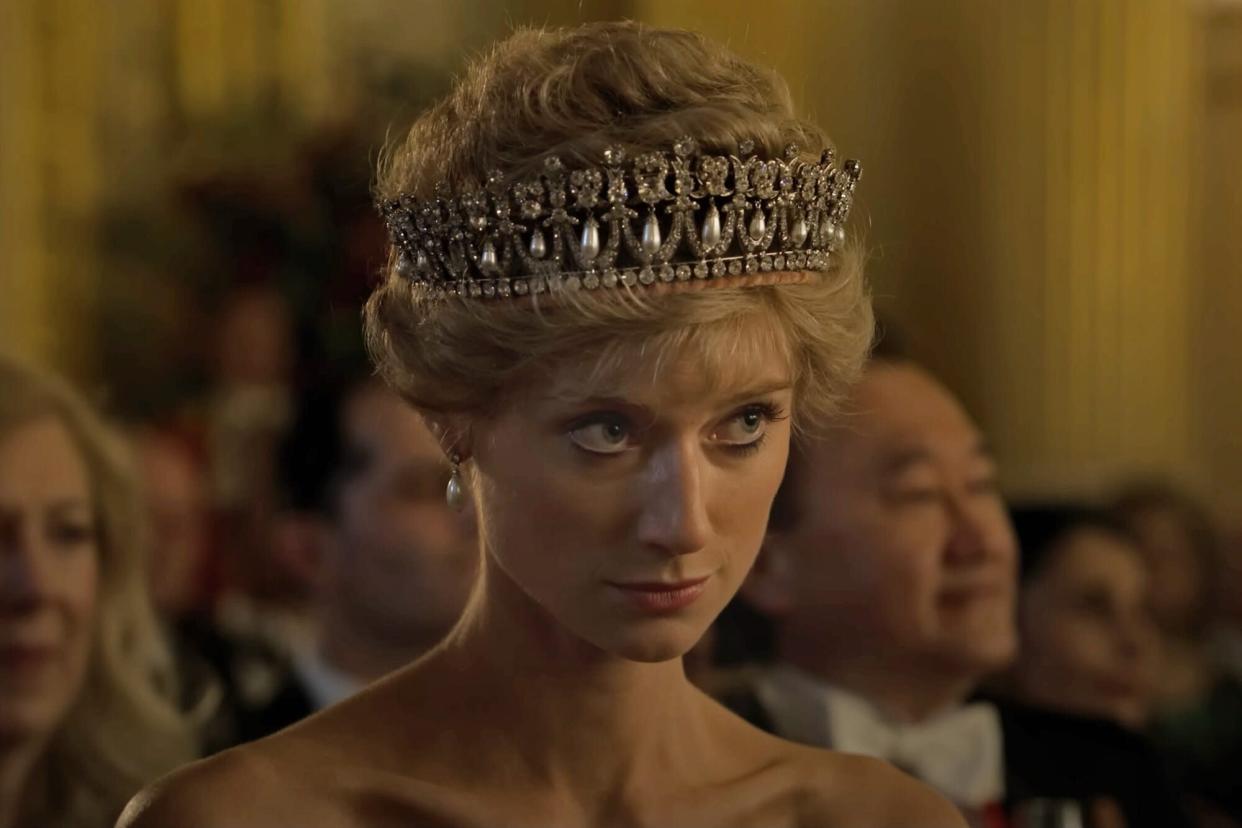 Netflix/YouTube Elizabeth Debicki as Princess Diana in The Crown

Hold onto your crowns.

On Thursday, Netflix released the first trailer for the highly anticipated season 5 of The Crown, coming to the streaming service on Nov. 9. Keeping with the tradition of casting new actors to reflect the real-life royals as they age over the decades, season 5 stars Imelda Staunton as Queen Elizabeth, Jonathan Pryce as Prince Philip, Lesley Manville as Princess Margaret, Dominic West as Prince Charles and Elizabeth Debicki as Princess Diana. West’s teenage son Seamus will also appear as a young Prince William.

Opening with scenes of the devastating 1992 fire at Windsor Castle, the trailer features a voiceover from Queen Elizabeth summing up a year that also saw the separations of Princess Diana and Prince Charles and Prince Andrew and Sarah Ferguson — a year the Queen later famously called her “annus horribilis” (Latin for “horrible year”).

The trailer — set to a haunting version of the 1997 hit “Bittersweet Symphony” by The Verve — also includes Princess Diana’s pain as she prepares to talk to BBC Panorama about life inside the palace. “I won’t go quietly,” she says. “I’ll battle to the end.”

“How did it come to this?” asks the Queen, while Charles sums up how he wants the monarchy to be more modern and reflect “the world outside.”

BBC journalist Martin Bashir (played by Prasanna Puwanarajah) then says the family sees Diana “as a threat,” while Prince Philip adds in conversation with the princess that “it’s a system. For better or for worse, we’re all stuck in it.”

Amid the upheavals, U.K. TV news anchor Trevor McDonald asks, “Have royal scandals damaged the country’s reputation?” In a pointed remark to Charles, the Queen says, “I don’t think it’s my behavior that’s threatening its survival.” At another point, Charles screams in rage, presumably about Diana, “What the hell is she doing?”

Elsewhere, Camilla Parker Bowles (Olivia Williams) lurks in the background, Princess Margaret attends a party in full royal highland regalia and Diana is seen with Mohamed Al Fayed, whose son Dodi was her boyfriend and died alongside her in Paris.

Viewers might also recognize Princess Diana in her famous black ensemble that she wore out in June 1994 on the day Charles confessed on national television that he had been unfaithful to her — dubbed the “Revenge Dress.” In another scene, Debicki sports the Cambridge Lover’s Knot Tiara, one of her go-to headpieces that has been worn by Kate Middleton in recent years.

RELATED: Everything to Know About The Crown Season 5 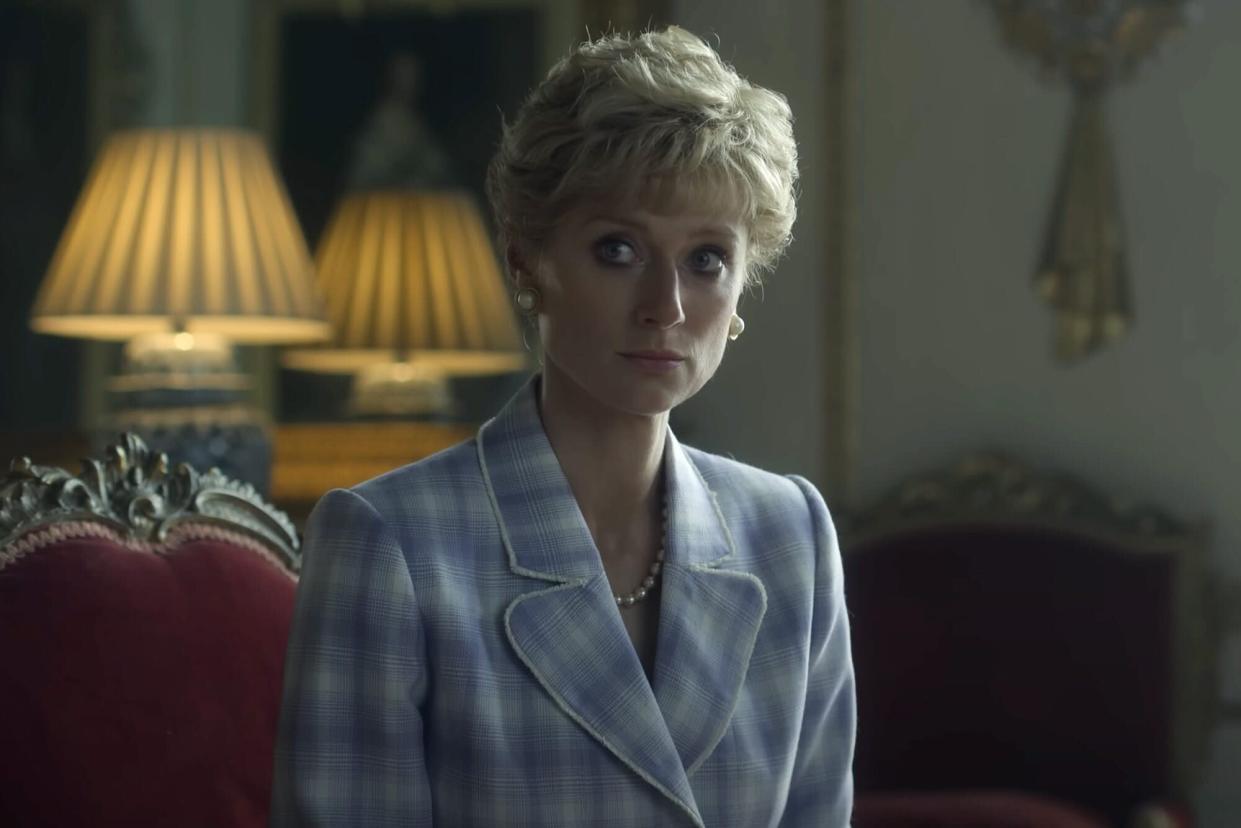 Speaking with Entertainment Weekly, show creator Peter Morgan spoke about what King Charles might think of the show, which will follow the decline of his marriage to Princess Diana.

“I think we must all accept that the 1990s was a difficult time for the royal family, and King Charles will almost certainly have some painful memories of that period,” he said. “But that doesn’t mean that, with the benefit of hindsight, history will be unkind to him, or the monarchy. The show certainly isn’t. I have enormous sympathy for a man in his position — indeed, a family in their position. People are more understanding and compassionate than we expect sometimes.”

Can’t get enough of PEOPLE‘s Royals coverage? Sign up for our free Royals newsletter to get the latest updates on Kate Middleton, Meghan Markle and more!

A house divided. Watch the trailer for Season 5 of The Crown this Thursday. pic.twitter.com/wde65vz6cY

Just ahead of the trailer’s release, the streaming service received criticism from Oscar winner Dame Judi Dench, who said she believed the show should carry a disclaimer at the start of every episode.

“The closer the drama comes to our present times, the more freely it seems willing to blur the lines between historical accuracy and crude sensationalism,” Dench, 87, said in a letter to The Times published Wednesday.

“Given some of the wounding suggestions apparently contained in the new series — that King Charles plotted for his mother to abdicate, for example, or once suggested his mother’s parenting was so deficient that she might have deserved a jail sentence — this is both cruelly unjust to the individuals and damaging to the institution they represent,” Dench added.

“No one is a greater believer in artistic freedom than I, but this cannot go unchallenged,” she continued. “Despite this week stating publicly that The Crown has always been a ‘fictionalized drama’ the program makers have resisted all calls for them to carry a disclaimer at the start of each episode.”

The fifth season of The Crown will be released on Nov. 9. Seasons 1 through 4 are now streaming on Netflix.