High-tech body scanners will be used to screen visitors at Victorian jails this year in an effort to head off drug traffickers hoping to exploit pent-up demand among a prison population starved of supply during the pandemic. 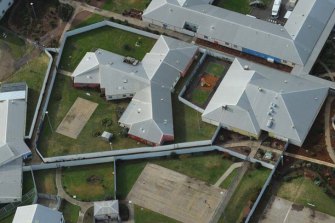 Positive drug tests inside Victoria’s 17 public and privately operated detention facilities have fallen to historic lows since the visitor lockout was agreed to by national cabinet in late March last year.

It is hoped the aviation-grade scanners will outmanoeuvre traffickers who in past years dealt in pills and powders but are increasingly learning how to move new forms of synthetic drugs as thin strips on the body, sewn into clothing or lined on the back of postage stamps.

Data from Corrections Victoria’s Drugs in Victorian Prisons Report shows the rate of positive drug tests among targeted prisoners fell from 11 per cent last March to just 5.5 per cent in September, the most recently tabulated month.

The rate of positive tests among randomly sampled inmates in the same periods fell from about 5 per cent to less than 2 per cent.

“We’re ready for it if contraband increases,” said Julian Kennelly from the Community and Public Sector Union, which includes prison officers.

He said officers had previously found tabs of synthetic drugs stitched into shirt collars and baseball caps and embedded in letter seals – a long way from “the early days of the women’s jail at Deer Park [now the Dame Phyllis Frost Centre] when it was as unsophisticated as throwing tennis balls over the fence”.

Smugglers turned to drones to keep their customers in supply during the visitor lockout. The Age revealed last year that Corrections Victoria recorded 97 security incident reports about remotely piloted vehicles between March and early November, an increase of 246 per cent on the full year before the COVID-19 crisis.

Prisons have installed drone-detection technology at the five facilities considered most at risk.

Legislation also came into effect in November last year allowing prison staff to provide photocopies of mail to inmates instead of the originals. This was designed to prevent buprenorphine, a substitute for heroin and methadone and common in Victorian jails, being smuggled to inmates inside letters and drawings.

“Victoria’s prison system has one of the toughest and most extensive detection regimes in Australia – the use of drone-detection technology, perimeter patrols, drug-detection dogs, CCTV and prison intelligence operations along with scanners all contribute to foiling attempts of contraband entering the system,” Corrections Minister Natalie Hutchins said.

Arctic blast will send temperatures plummeting to 8C from today