Buenos Aires: Argentinian investigators have raided the home of Diego Maradona's psychiatrist, the latest twist in a probe into the soccer legend's death last week, which has already seen files seized from his personal doctor.

Prosecutors, with a judicial order, carried out searches in the house and the private office of Agustina Cosachov in Buenos Aires on Tuesday (Wednesday AEDT), as they had done on Sunday with the properties of Maradona’s personal doctor Leopoldo Luque. 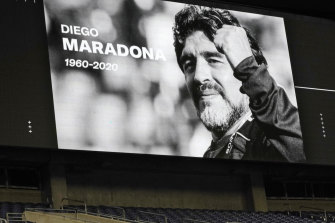 A photo of soccer great Diego Maradona is shown on a large screen during a moment of silence before a match in Seattle, US, on Tuesday.Credit:AP

"These are routine measures when investigating the causes of death of a patient," Cosachov's lawyer, Vadim Mischanchuk, told local television. "What is being sought is a medical history on telephones and computers."

Maradona, who fought long battles with addiction, died of a heart attack at the age of 60 last week after undergoing brain surgery earlier in November for a blood clot.

The World Cup winner's death had ripple effects around the globe and drew an outpouring of grief from Argentina to Naples, Italy. 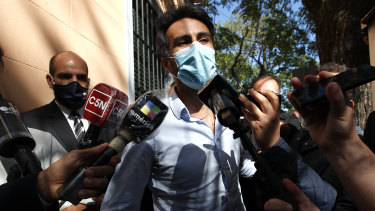 Prosecutors are investigating possible "malpractice" and if necessary medical requirements for care were met, the lawyer Mischanchuk said.

Two sources close the case, who declined to be named, said "doctors are the main ones being targeted by the prosecution" for Maradona's death. The probe was looking at possible wrongful death and medical negligence, they said.

Maradona's lawyer, Matias Morla, said last week he would ask for a full investigation of the circumstances of the sport star's death, criticising what he said was a slow response by emergency service.