The controversial £98billion HS2 project is facing new ‘cost pressures’ of £800million caused in part by protests at Euston Square Gardens and the lockdowns, a government report has admitted.

HS2 minister Andrew Stephenson warned half of the potential pressures are due to difficulties related to the redevelopment of London Euston station.

The remainder is as a result of protester action, the pandemic and ensuing lockdowns, and delays in approving designs and obtaining planning consents.

The Department for Transport (DfT) insisted that it expected HS2 to be delivered on budget without the need to increase the contingency fund.

But the report is likely to be embarrassing for the Government, especially after Prime Minister Boris Johnson endorsed the scheme in February 2020.

MPs and ministers who support the rail-line say HS2 will link London, Birmingham, Manchester and Leeds, and rebalance the UK’s economy.

However, its critics have called the project ‘expensive, wasteful and destructive’., with environmental protesters claiming the line will destroy or irreparably damage 108 ancient woodlands and 693 wildlife sites. 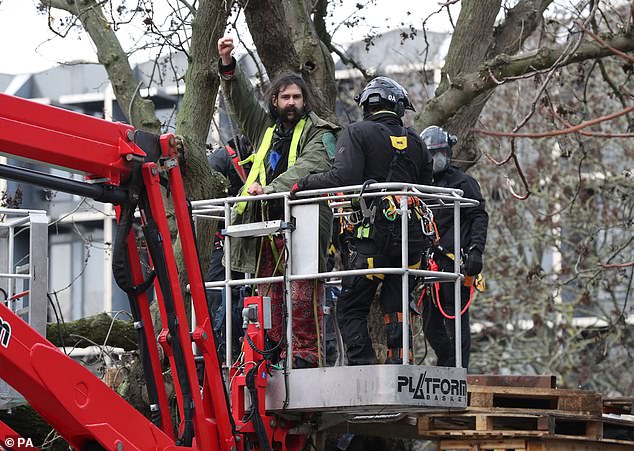 Rebellion protester raises his fist after being removed from a tree at the encampment in Euston Square Gardens in central London on January 31, 2021 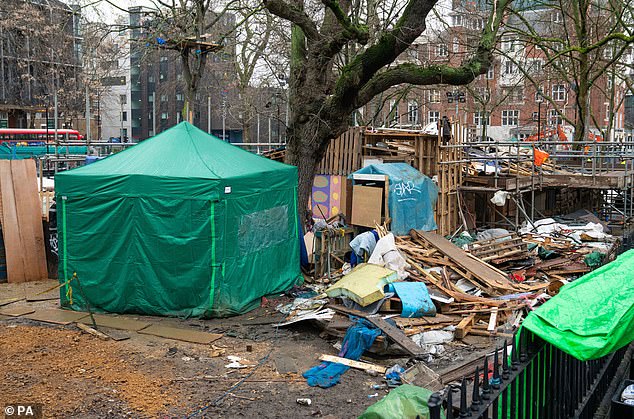 The HS2 Rebellion encampment in Euston Square Gardens on February 1, 2021 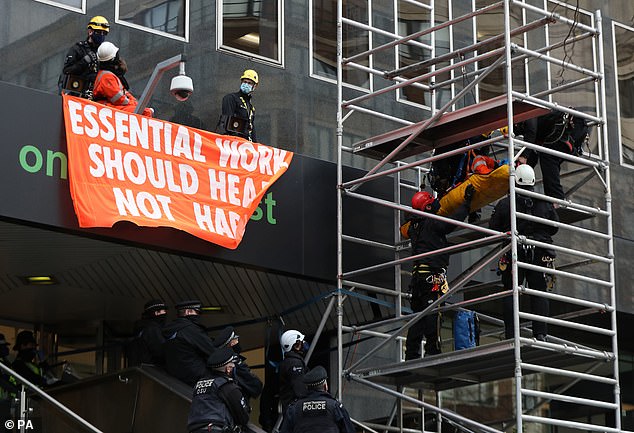 Extinction Rebellion protesters are removed by police officers after they climbed onto the canopy of the HS2 offices on Eversholt Street in London on February 2, 2021

The Woodland Trust, a conservation charity, calls HS2 ‘a grave threat to the UK’s ancient woods, with 108 at risk of loss or damage’.

But HS2 says only 0.29 square kilometres (0.11 square miles) of ancient woodland will be lost during the first phase. HS2 says it will reduce journey times between London and northern England and add capacity to Britain’s crowded rail network.

Critics question whether HS2 is worth its ballooning price tag especially after a pandemic that might permanently change people’s travel habits.

The first phase linking London and Birmingham is due to open between 2029 and 2033, according to HS2 Ltd.

In September Boris Johnson joined the front line to see work begin on HS2, as shovels hit the ground in Solihull.

He said the ‘incredible’ scheme, launched in 2009, would deliver not just ‘22,000 jobs now, but tens of thousands more high-skilled jobs in the decades ahead’.

Transport Secretary Grant Shapps told MPs last year the first trains may not be up and running until 2031.

In addition, the Government-commissioned Oakervee Review warned in 2018 that the final bill for HS2 could reach £106billion (at 2019 prices).

The coronavirus crisis has also had a financial impact on the rail scheme, due to access delays and reduced productivity.

In a six-monthly report to Parliament, Mr Stephenson explained that the £800million can be covered by contingency funds contained within the £44.6billion budget (in 2019 prices) for Phase 1 between London and Birmingham agreed last year.

Around £11billion (in actual prices) has already been spent on the project, including through land and property acquisition. In addition, contracts have been signed totalling £12.6billion (in 2019 prices).

The line involves the construction of a new Y-shaped 225mph rail network that is expected to connect London, Birmingham, Manchester and Leeds.

However, environmentalists have slammed the ‘expensive, wasteful and destructive’ project. Protesters claimed the line will destroy or irreparably damage 108 ancient woodlands and 693 wildlife sites.

The Government-commissioned Oakervee Review also warned in 2018 that the final bill for HS2 could reach £106billion (at 2019 prices).

The review commissioned a comparative analysis of this estimate and those by HS2 Ltd and said characteristics of major rail infrastructure cost plans, according to evidence from Network Rail, were ‘not evident’ in the external estimate.

Mr Stephenson said ‘schedule pressures’, partly due to the pandemic, mean HS2 Ltd is carrying out a ‘re-planning exercise’ due to be completed in the spring.

He claimed this ‘will not impact the projected delivery into service date range of 2029-2033’ set out last year, but warned ‘further cost pressures could still emerge if mitigation activity is required’.

A DfT spokesman said: ‘HS2 Phase 1 remains within its schedule and budget.

‘Delivering a major project on the scale and ambition of HS2 will always be challenging but, as mentioned in today’s parliamentary report, current cost pressures are well covered within our existing budget.

‘This project is at the heart of our plans to build back better, supporting more than 15,000 jobs and 500 apprenticeships.

‘We are committed to a tight control of costs and HS2 Ltd continues to identify areas across the project where savings and efficiencies can be made.’ 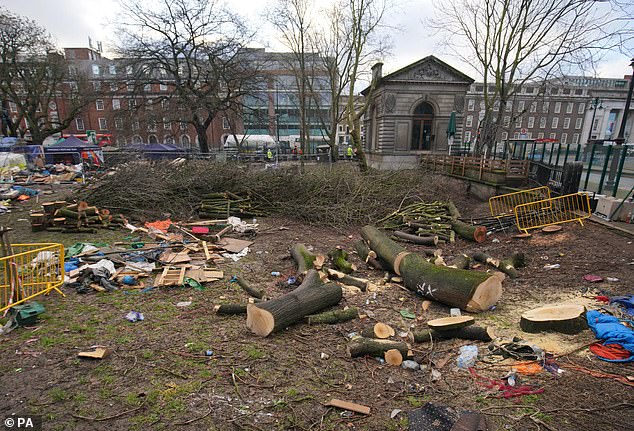 Trees cut down in Euston Square Gardens in central London on February 5, 2021