The Thai Wai to combat coronavirus: Asian pupils teach British classmates their nation’s greeting of bowing with hands pressed in prayer in bid to stop spread of deadly bug

The coronavirus outbreak may have brought handshakes to a halt, but one school has come up with its own solution.

Pupils are now greeting visitors with a slight bow, with their palms pressed together in a prayer-like fashion. The higher the hands are held, the greater respect is shown. 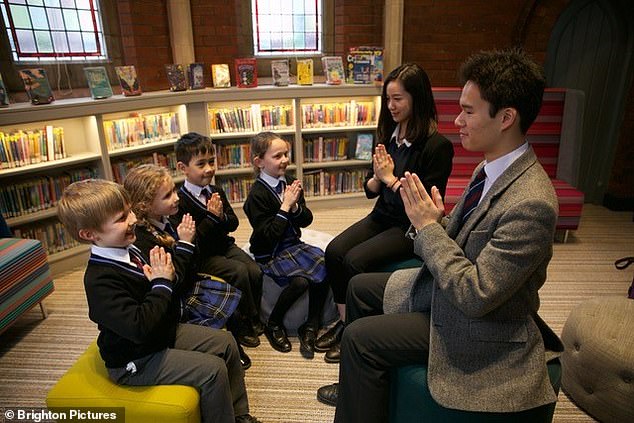 Thai pupils at Brighton College are teaching their younger prep school peers the traditional Thai Wai greeting as an alternative to shaking hands. Greetings are changing around the world to stop the spread of the potentially fatal virus 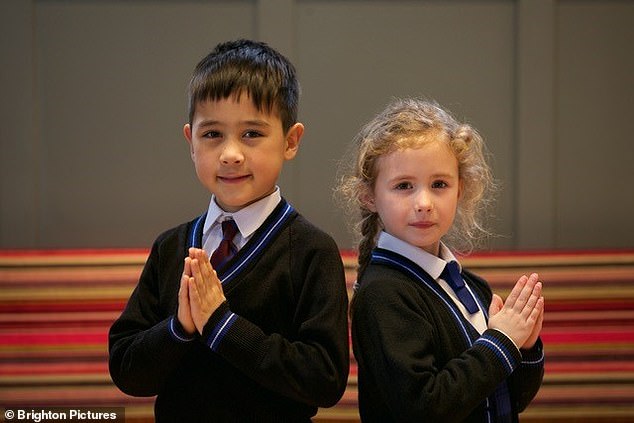 Brighton College Prep School pupils demonstrate the Thai Wai, headmaster John Weeks says the greeting is ‘a model for the future,’ as it aims to prevent the spread of coronavirus

John Weeks, headmaster of Brighton College Prep School, said: ‘We always ask our pupils to greet visitors with a handshake, introduce themselves properly and smile.

‘We don’t want to lose the warmth of that welcome so we asked three Thai children to explain how we can use the Thai Wai as a model for the future as we seek to play our part in slowing the spread of the virus.’

He hoped the new policy would protect older visitors, adding: ‘Young children are not suffering from the coronavirus whereas for older people it is much more serious. 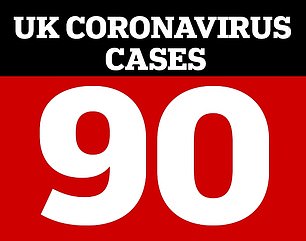 As the number of coronavirus cases in the UK climbs, Brighton College is determined to keep greeting visitors properly

‘That means that primary schools have a particular responsibility to find fun and imaginative ways of making young children realise that running over to kiss granny, should there be a pandemic, would not be wise.’

Handshakes are being turned down more and more as the virus continues to spread.

‘Older pupils will more easily understand the importance of regular handwashing and trying to stop touching their hands or face but six or seven year olds are much more likely to forget all of that and so, inadvertently, put grandparents at risk.

‘Through learning the Wai, they might just remember why they learned it and replace hugging granny with a lovely bow instead.’

If handshakes are out, what can you do instead?

In China announcements are encouraging the public to greet one another by placing their first into the opposite palm, known as the gong shou gesture.

French etiquette expert Philippe Luchtfus is telling his countrymen to replace a kiss on the cheek with greeting someone by looking into their eyes.

The Romanian spring festival Martisor traditionally sees men hand out string and flowers to woman and kiss them.

Before the festival, which happened on March 1, Nelu Tataru, state secretary at the health ministry, told Romanians: ‘Let’s give the flowers but not the kiss’.

Some New Zealand schools have abandoned the Maori greeting known as the hongi – which sees two people press their noses together.

Wellington polytechnic WelTec said that instead of staff greeting new students with a hongi, its welcome ceremony would instead include a waiata, or Maori song.

In Australia, health minister Brad Hazzard suggested patting one another on the back.

He said: ‘It’s time that Aussies actually gave each other on the back for the time being – no handshaking.’

The United Arab Emirates and Qatar are advising citizens to wave at one another instead of the traditional nose to nose greeting.

Drunken British GP, 45, avoids being struck off after assault