SIR KEIR STARMER: Tributes to the Queen in parliament were a poignant display of how our country and our politics has far more that brings us together than divides us

It was when I had the honour of attending the Platinum Jubilee celebrations this year that I began to reflect on what the Queen’s reign has meant for our country.

As we marked 70 glorious years, it seemed impossible to imagine a Britain without her. Of course, we knew she wouldn’t go on for ever.

But the vast majority of us have never known another Monarch, which is why the shock of her loss is so acutely felt.

She seemed as permanent a feature of our country as the mountains near Balmoral – the place she loved so much.

Britain is facing difficult times. Whether it is the rising cost of living or the spectre of war in Europe, people are worried.

The loss of our Queen robs us of the nation’s stillest point, its most steadying influence, at a time when so much seems to be in flux. But the response we have seen over the last week has been heartening and has reflected the nation she knew and served.

Tributes in Parliament were a poignant display of how – despite many disagreements – our country and our politics has far more that brings us together than divides us. 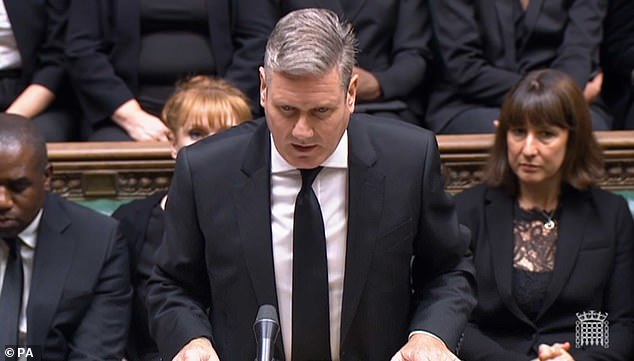 As we marked 70 glorious years, it seemed impossible to imagine a Britain without her

King Charles’s tour of the country has shown that while we can mourn the end of one era, we can still look forward to a new one.

And the way people from all walks of life have patiently queued to say one final goodbye has reminded us of the quiet decency of this country – befitting of the late Queen’s life.

Underpinning it all is a deep respect. A British respect. For a family grieving, for the Monarchy, for public service and for each other. Of that we can be proud.

Over the last few years, Britain has been tested time and again. No one believes it is suddenly going to get easier.

But the crises of the last few years have taught us that when we pull together we are strong enough to get through. Our collective spirit saw us through the dark days of the pandemic. That collective spirit has been on display again this week.

There are those who look at Britain and see a country that is simply about tradition and ceremony.

That is only half the story. The other half is about evolution and adaptation. Of matching the times we find ourselves in. Of being proud of our history but embracing the future.

That is what Queen Elizabeth’s reign will be remembered for: a steadying, guiding influence during a period of huge change.

Those essential parts of our national character – our openness, pride, spirit – are what convinces me that Britain’s best days can still lie ahead of us.

Dare I say, I think that is what Queen Elizabeth would want us to think too.

Pupils find way around ban on handshakes amid coronavirus fears

British father dies trying to save daughters in Portugal