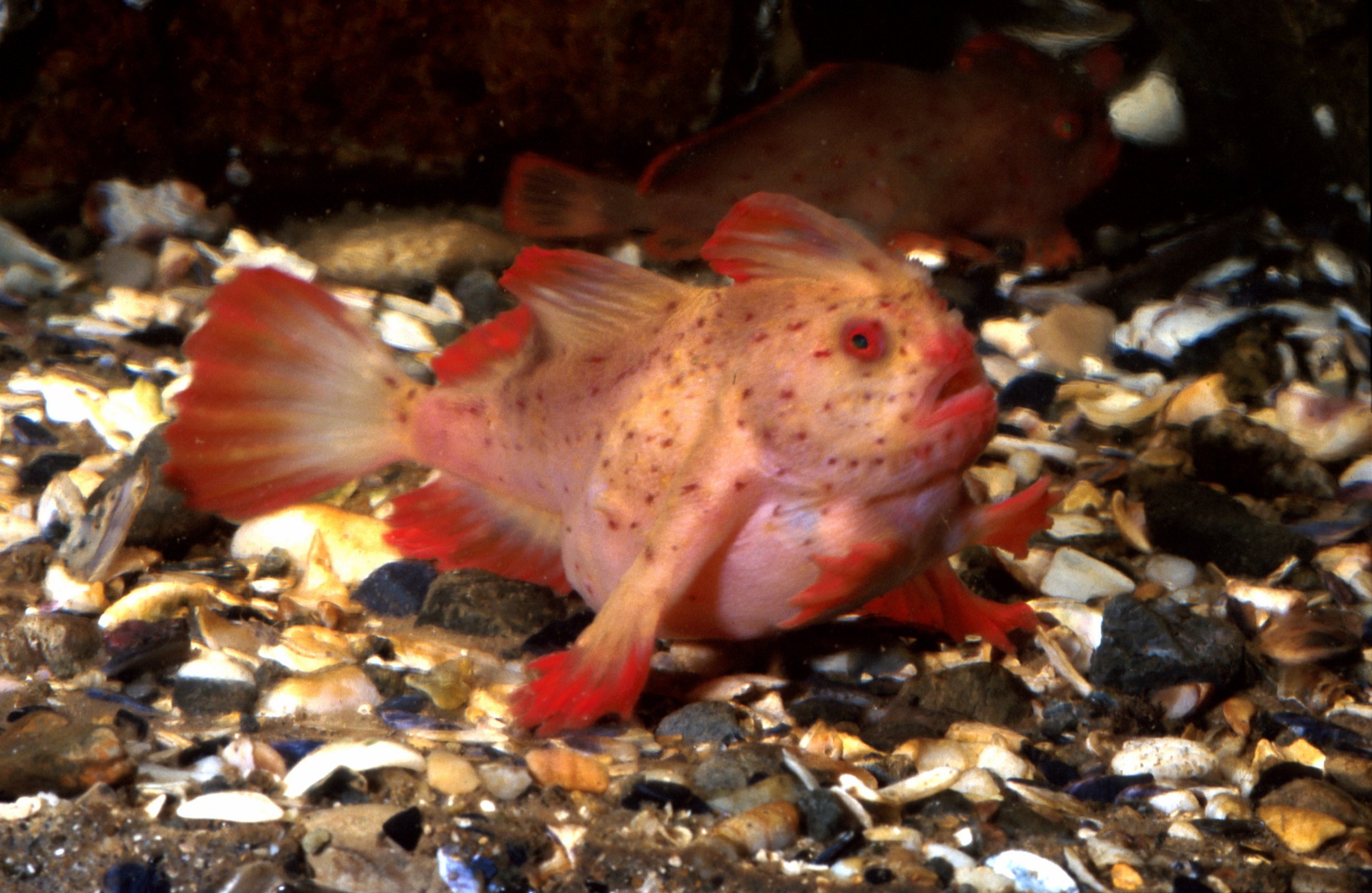 A strange fish that uses hand-like fins to walk along the seabed has been spotted for the first time in more than two decades.

Pink handfish are extremely rare, with this subspecies last seen off the coast of Tasmania in Australia back in 1999.

There are only four previous sightings on record, which has led to the unusual creature being labelled critically endangered.

Scientists were delighted when they made a ‘needle in a haystack’ discovery last year.

They spotted the elusive handfish on a baited underwater camera submerged in the Tasman Fracture Marine Park last February.

Marine biologist Neville Barrett said the find offered new hope for the survival of the species, which was previously thought to live in the shallows.

Professor Barrett, who teaches at University of Tasmania, said: ‘The biggest surprise was finding a pink handfish in the park at a depth of around 120 metres.

‘Until this sighting, the species had only ever been recorded four times and was listed as a rare species under Tasmania’s Threatened Species Act.

‘This is an exciting discovery and offers hope for the ongoing survival of pink handfish, as clearly they have a wider habitat and distribution than previously thought.’

The pink handfish (Brachiopsilus dianthus) owes its name to its unique fins which it uses to walk along the seabed.

In footage of the sighting, the fish is seen shifting its weight with its ‘hands’ on the ground.

Then it’s disturbed by a rock lobster and darts forward, swimming past the camera.

Ashlee Bastiaansen, also from the University of Tasmania, said it was the fins of the creature that caught her attention.

She told ABC: ‘I was watching one of our rough videos and there was a little fish that popped up on this reef ledge that looked a bit odd. I had a closer look and you could see its little hands.’

The huge marine reserve covers an area larger than Switzerland and contains and enormous crack in the Earth’s crust.

Weird and wonderful marine life is found at depth of more than 4,000 meters, more than 12 Shards stacked on top of one another.

The pink handfish is native only to Australia and is one of many endemic species in the area, according to Jason Mundy from Parks Australia, the government agency that manages the country’s national parks.

He said: ‘Collaboration is the key to surveying this extraordinary marine park. Its underwater canyons and mountains hold a remarkable diversity and abundance of marine creatures, many of which are found nowhere else in the world.

‘This rare sighting during a joint survey with the University of Tasmania demonstrates the benefits of working in partnership with research institutions in managing our marine parks.’

St Paul's Cathedral is evacuated due to gas leak