Men’s risk of breast cancer increases significantly if they are related to women who have had the disease, study suggests

Man whose female relatives have had breast cancer may be at a significantly greater risk of getting it too.

The study – the world’s largest of its kind – looked at 1,380 men with breast cancer and discovered three genetic variations which run in families, and are more likely to cause male than female breast cancer.

While the main genetic quirk which poses a danger to men is a mutation in the BRCA2 gene, the other variations may be important. 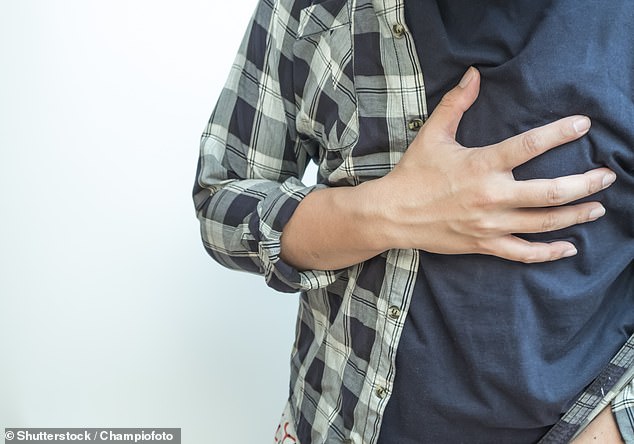 Male breast cancer is rare, affecting only around 370 men a year in the UK. But now, there is strong evidence that male breast cancer may be inherited genetically. Pictured: Stock photo of a man with his hand on his breast

The findings could lead to a blood test to calculate a man’s risk of breast cancer, and the test could provide hope for a disease which kills around 80 men a year.

The scientists found men with risky genetic variations could be up to four times more likely to get breast cancer.

All the quirks linked to male breast cancer are also linked to the disease in women.

The study, published in the Journal of the National Cancer Institute, said one in 1,000 men may be at risk of breast cancer, and 10 per cent of those, with the BRCA2 mutation, could benefit from a blood test to look for other genetic variations.

Dr Nick Orr, lead author of the study from the Institute of Cancer Research in London, and Queen’s University Belfast, said: ‘Our study has shown, for the first time, that the genetic factors influencing susceptibility to male breast cancer and the most common type of female breast cancer are much more alike than they are different.

‘We knew that men should be aware of their family history, and close female relatives with breast cancer, but this study provides more evidence that their DNA is important.’

While the new findings add to evidence on the genes involved in male breast cancer, the major gene linked to the disease remains BRCA2.

This is closely related to the ‘Angelina Jolie gene’ BRCA1 which also raises the risk of breast cancer and led the Hollywood actress to have a mastectomy.

The study suggests the shared genes for female and male breast cancers could be used to develop treatments which benefit both men and women.

What are the symptoms of male breast cancer?

Breast cancer is rare in men. There are about 370 men diagnosed each year in the UK. This compares to around 54,800 cases in women.

The most common form of cancer in women and men is called ‘invasive breast carcinoma – no special type’.

The risk factors for male breast cancer include:

The most common symptom for men with breast cancer is a lump in the breast area. This is nearly always painless.

Other symptoms can include:

The same treatments are used for breast cancer in men as for women.

‘An unguided missile’: Was BBC interview really to blame for Diana’s downfall?

Surgeons 'play God' during coronavirus by choosing who they operate on

Mum transforms shed into secret den for autistic son, 8, kitted out with board games, books and blankets for just £180