The desperate search for two fisherman missing at sea has continued today more than 24 hours after their ‘scallop wars’ boat sank off the East Sussex coast.

HM Coastguard relaunched the major search today for the missing pair who disappeared after the fishing vessel Joanna C sank on Saturday.

One man, who was onboard the scalloping vessel, was pulled from the water off Newhaven, East Sussex, and rushed to hospital yesterday after he was found by rescuers clinging to a lifebuoy. 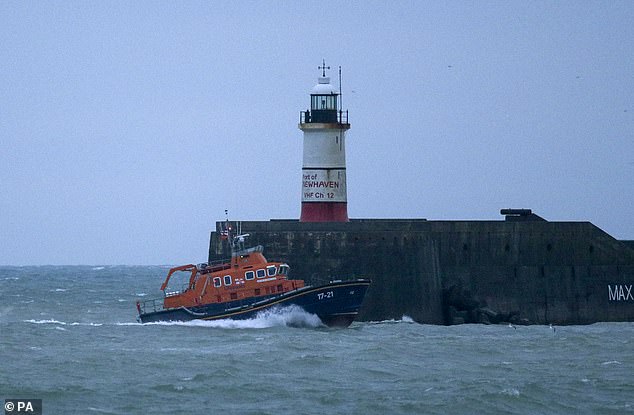 The search for the two missing crew members was suspended at 11pm yesterday and relaunched at first light this morning.

An additional 12 vessels, including local fishermen, have responded to the Coastguard broadcasts and are helping with the search at sea. 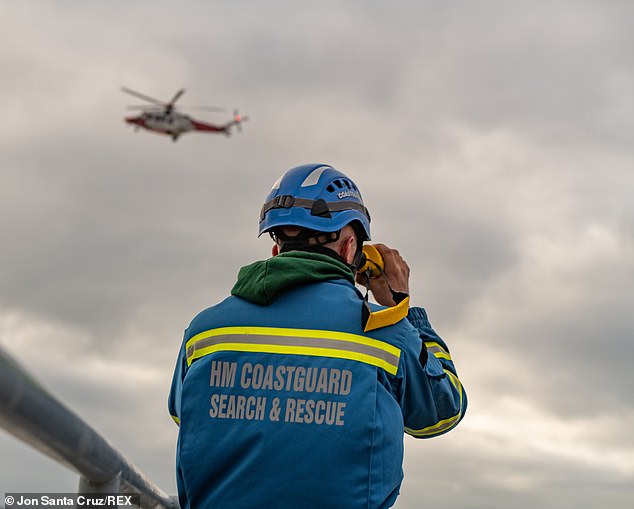 Deputy Director of HM Coastguard Chris Thomas said: ‘HM Coastguard’s National Maritime Operations Centre has coordinated a major rescue effort today, with many units searching tirelessly since first light and finding one casualty who has been recovered safely to hospital.

‘Sadly two other crewmen have not yet been found and all our thoughts are with their families and friends.

He continued: ‘It is testament to the local maritime community that HM Coastguard were so admirably supported throughout the day by nearby vessels and the local fishing communities who joined us in force and made strenuous efforts to locate their colleagues during the search. 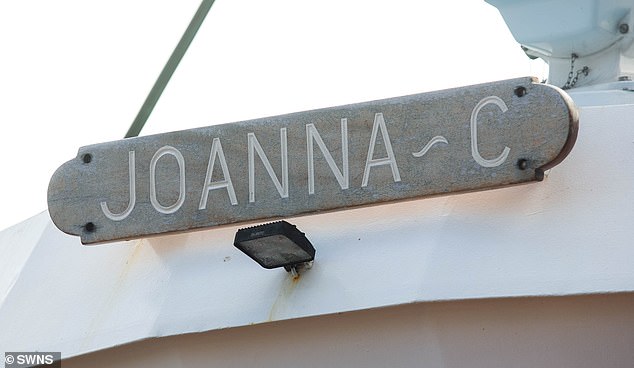 One man, who was onboard the scalloping vessel, was pulled from the water off Newhaven, East Sussex, yesterday and rushed to hospital after he was found by rescuers clinging to a lifebuoy. Pictured: Joanna C at the Brixham Harbour, Devon

‘At one point, Coastguard coordinators described tracking 14 vessels covering the search plan area including the two RNLI all weather lifeboats at sea.’

A GoFundMe page set up to support the families of the two missing men has so far raised more than £2,000.

Donations will be passed to the Fishermen’s Mission, a charity providing practical, emotional and financial support to fishermen and their families, which will distribute it to those affected.

Organiser Tony Rowe said on the page: ‘Our prayers are with those directly involved and the wider community who all have been affected in some way.’

HM Coastguard scrambled a search and rescue helicopter after receiving a distress beacon from the boat at 6am on Saturday.

The vessel had previously been damaged during the ‘scallop wars’ with French fishermen.

The rescue helicopter based at Lydd, Kent, was deployed along with two RNLI lifeboats based in Newhaven and Eastbourne to try to find the missing boat. 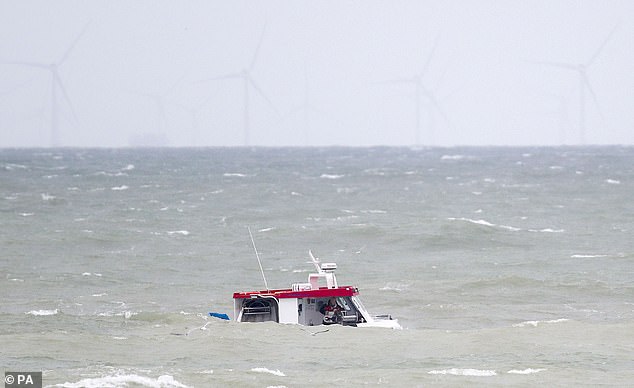 Several fishing boats joined the search for the Joanna C which sank off the coast of Seaford, Sussex at 6am Saturday

A distress beacon on board the Joanna C, pictured, began broadcasting this morning three miles from Seaford, near Newhaven

The RNLI confirmed one man was rescued after he was found clinging to a lifebuoy. He has been transferred to hospital for treatment 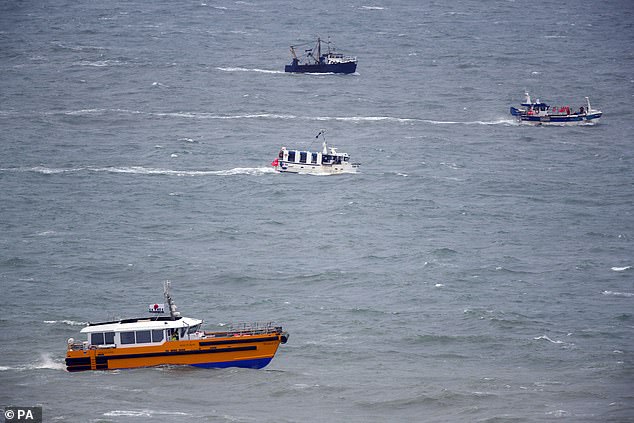 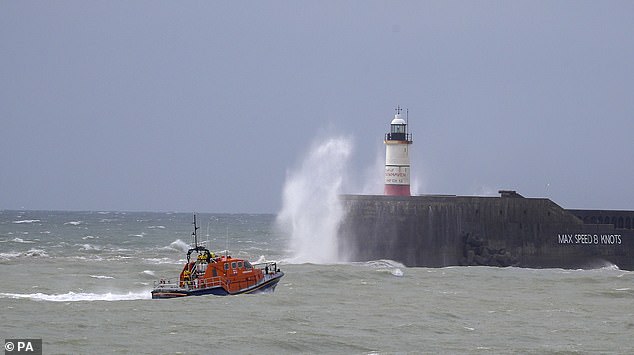 RNLI volunteers are among those searching for the two men. The search has since been called off for the evening

The beacon’s signal put the vessel three nautical miles off the coast of Seaford, near Newhaven.

In an update at 10.30am on Saturday, HM Coastguard said one man had been rescued from the water by the Newhaven RNLI lifeboat and has been transferred to hospital.

The man, believed to be the skipper, was found clinging to a lifebuoy.

It has not been revealed who was onboard the vessel at the time it sunk.

The vessel is owned by Derek Meredith and skippered by Nathan Clark.

The Joanna C is a 45ft scalloping vessel registered in Brixham, the Coastguard said, and three people were aboard when it sank.

As well as the RNLI lifeboats, the Birling Gap Coastguard Rescue Team checked for sightings from the shore.

Another fishing vessel close to the area was helping with the search before it was called off for the evening.

The Coastguard rescue helicopter based in the Solent was also deployed to relieve the Kent-based aircraft.

HM Coastguard controller Piers Stanbury earlier said: ‘Thankfully one of the three people on board at the time of sinking has been pulled out of the water and brought to shore by the Newhaven RNLI lifeboat but the intensive air and sea search for the two missing crew continues.

‘Debris has been located close to the location of the EPIRB alert location but no life raft has been found as yet.’

Local MP Anthony Mangall said: ‘My thoughts are with the crew of the Joanna C. The Brixham fishing community is one big family and we are all wishing their swift and safe return.’

One local fisherman from Brixham, home port of the Joanna C, described the vessel’s skipper as ‘very experienced’.

He said he received a phone call this morning from a fellow fisherman with the terrible news that the Joanna C was lost. 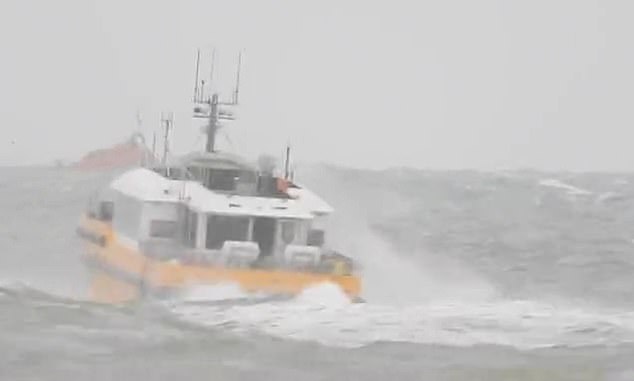 The rescue helicopter based at Lydd, Kent, was deployed along with two RNLI lifeboats based in Newhaven and Eastbourne to try to find the missing boat. Pictured: The rescue operation

He said the entire community of Brixham was in shock and was praying that the two remaining crewmen will be safely recovered.

In 2013, the Joanna C fished a 500lb WWII bomb from the seabed off the coast of Beachy Head and required an army bomb disposal squad to destroy the munition which had been dumped by a British aircraft.

The Joanna C underwent a major refit in 2019 after its engine failed.

According to Fishing News, the as well as a new engine, the vessel was remodelled to allow it to remain at sea for up to a week.

As part of the nine-month refit, escape hatches were fitted in the accommodation area.

The 45ft vessel is designed to dredge scallops and has been involved in confrontations with French trawler men. 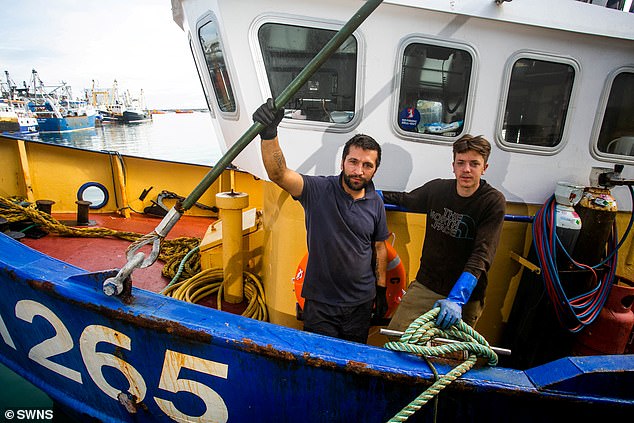 Last year the Joanna C, skippered by Nathan Clark, left, pictured beside crew mate Callum Clark, right, was surrounded by French trawlers off the coast of Normandy. The vessel suffered a broken window after French fishermen pelted it with objects

It comes after a chilling warning from British skippers that hostilities are worsening and a death is inevitable.

Fears were raised last month when two British boats clashed once again in the scallops conflict.

The battle over scallops in the English Channel has been escalating and French trawlers last month confronted British boats, firing flares and throwing frying pans.

In August, French and British fishermen were involved in a skirmish when around 40 French boats tried to stop British vessels from fishing 12 nautical miles off Normandy.

UK boats are permitted to fish in the scallop-rich area, but their presence rustled the French, who hold the British responsible for draining shellfish stocks.

It is not yet known if the ‘scallop wars’ is behind the sinking. 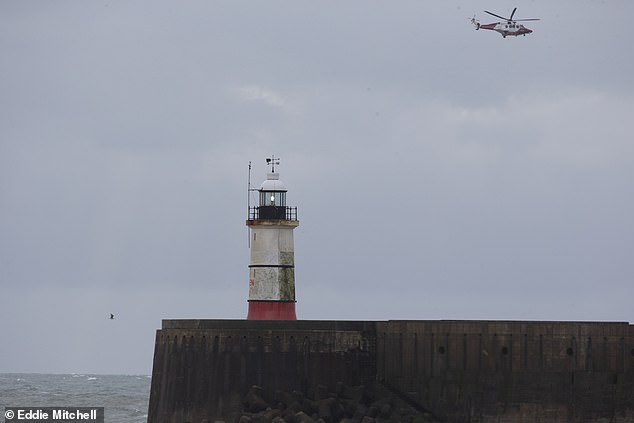 Last year, the crew of the Joanna C were left ‘extremely shaken’ by an early morning attack in the English Channel.

Fisherman said they tried to protect themselves from objects being thrown at them – while the French Navy just stood and watched.

Last month, two British boats, the Girl Macey and the Golden Promise, were involved in the deep-sea skirmish.

They were surrounded by around 20 French vessels and pelted by objects including frying pans and rocks.

French crews even threw oil before firing a flare at one ship.

Speaking at the time, Derek Meredith, owner of the Golden Promise said ‘When I heard about it I was very concerned, if that flare went into the wheel house the boat would have burned up, and would the French have helped?

‘The boat would sink and the French would just leave our boys to drown.

‘They shouldn’t be doing what they’re doing but they seem to get away with it every year.’ 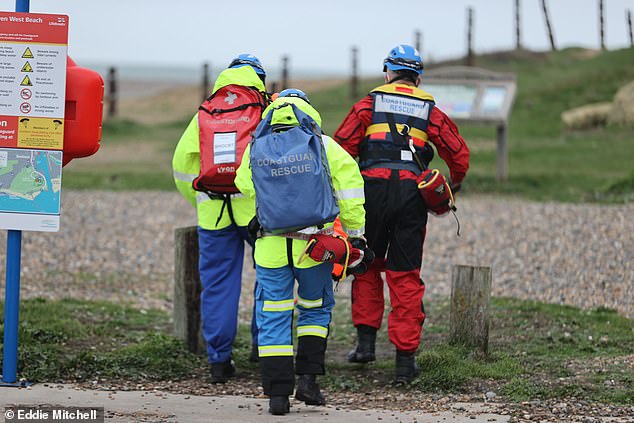 Search and rescue teams were operating on land, sea and the air searching for the crew who have been missing since 6am Saturday

Boris Johnson may give evidence to London Assembly