Seattle’s interim police chief on Wednesday demoted an assistant chief in connection with a skirmish with an umbrella-wielding protester that led police to declare a riot last summer.

Chief Adrian Diaz demoted Assistant Chief Steve Hirjak back to the rank of captain over his role as incident commander in the clash between riot-gear clad officers who sprayed tear gas and threw flash-bangs at protesters, sending people running after an officer struggled with a protester with an umbrella, the Seattle Times reported.

Protesters had opened umbrellas to protect themselves against tear gas.

The incident unfolded near the department’s East Precinct over Memorial Day weekend 2020. On the holiday itself, May 25, 2020, George Floyd was murdered by a police officer in Minneapolis. 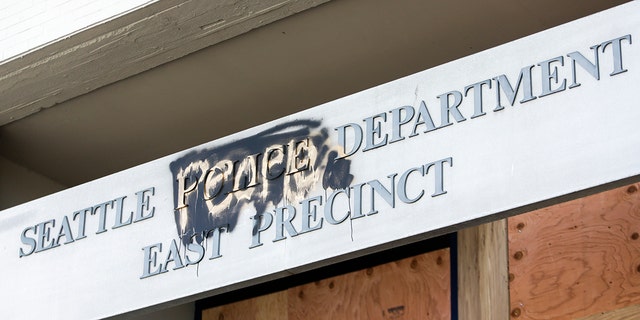 The word "people" is spray-painted over the word "police" on the closed Seattle Police Department’s East Precinct that was surrounded by the area known as the Capitol Hill Autonomous Zone (CHAZ), in Seattle last summer. (Getty Images)

Diaz, in a letter to City Councilmember Lisa Herbold, explained his reasoning for demoting Hirjak over another unnamed lower-level officer involved in the June 1 incident that the city’s police accountability office recommended for discipline.

Diaz initially said he was overturning the decision to disciple the lower-ranking officer two weeks ago, the Times reported. The officer had reportedly been in charge of giving orders that night.

The accountability office found the “weight of the evidence shows that the large majority of the crowd was not acting violently at the time,” before the officer grabbed the protester’s umbrella.

Diaz wrote the department needs to “identify and address root causes of outcomes that we all can acknowledge were problematic.”

“For this reason, and considering all of the information that has come before me and performance that I have personally observed, I am writing to advise that I have removed the Incident Commander from the position of Assistant Chief and returned him to the Captain rank” he added. Hirjak was promoted in 2018.