London: Until a few months ago scientists Ugur Sahin and Özlem Türeci lived a relatively obscure life in the German city of Mainz. Despite being worth billions, the so-called "husband and wife dream team" were known locally for their modesty: they share an unpretentious apartment with their teenage daughter and would only ever arrive at work on pushbikes.

Born in Turkey, Sahin emigrated to Germany in the late 1960s aged just four. His parents worked at a Ford factory in Cologne and watched their son grow up to study medicine at the University of Cologne and take up a residency at Saarland University in the small town of Homburg. It was at university that Sahin met Türeci, an equally brilliant medical student who was also the child of a Turkish immigrant.

This 1990s love story was the catalyst for one of the biggest breakthroughs in a pandemic which would ravage the globe in 2020. The couple's remarkable scientific achievements have seen the market valuation of their pharmaceutical company, BioNTech, swell to $US29 billion ($39 billion) and stoke talk of a possible Nobel Prize in 2021. 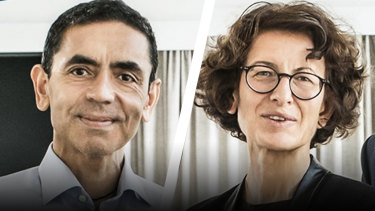 Ugur Sahin and Özlem Türeci, the husband and wife duo who founded BioNTech.

As coronavirus spread around the world in March, BioNTech joined forces with US drug giant Pfizer to develop a COVID-19 vaccine code named BNT162b2. British regulators on Wednesday granted the vaccine the Western world’s first approval for emergency use – a milestone which heralds the beginning of the end for a once-in-a-generation crisis and catapults the two little-known medicos to international admiration.

Dubbed the "husband and wife dream team" by European media, Sahin, 55, is BioNTech's chief executive officer and Türeci, 53, its chief medical officer. They founded BioNTech in 2008 with Sahin's former professor Christopher Huber and sold their other pharmaceutical firm, Ganymed, to Japanese multinational Astellas for €1.3 billion ($2.1 billion) in 2016.

Brothers Andreas and Thomas Strüngmann, the wealthy co-founders of the German pharmaceutical giant Hexal, were some of the first investors in Ganymed and have big stakes in BioNTech. In August 2019, Bill and Melinda Gates invested $US55 million to develop HIV and tuberculosis programs.

Sahin and Türeci were having breakfast in their Mainz in late January when the pair started talking about an article in The Lancet medical journal examining a mysterious illness circulating in China. After some further research the pair realised the disease had the potential to morph into a global pandemic and set up Project Lightspeed inside BioNTech. At least 800 of the firm's 1800-strong German and US workforce have been directly or indirectly involved ever since.

BioNTech was already working on a flu vaccine with Pfizer and the two companies agreed to collaborate on the COVID-19 vaccine without any contracts.

"This trust-based relationship is one of the key factors why we have been so fast, because it allowed us to share data, to share information, to start to avoid any type of delay," Sahin recently told the Associated Press.

BioNTech specialises in harnessing so-called messenger RNA, or mRNA, to train the immune system to attack hostile invaders, from viruses to tumours. Until now, the technology had never been approved for a drug in humans but Sahin and Türeci immediately saw the potential to apply it to COVID-19 patients when the virus first emerged early this year.

Pfizer said in November that the final results from its late-stage trial found the vaccine was 95 per cent effective. The efficacy wasn't the only remarkable result: developing, trialling, seeking regulatory approval and being granted it within the space of the year is virtually unheard of in the history of vaccines.

BioNTech and Pfizer plan to produce 1.3 billion doses in 2021 and have struck agreements with governments in the United Kingdom, United States, European Union, Japan and Australia. Health Minister Greg Hunt expects a verdict on whether to approve the vaccine by the end of January.

England's deputy chief medical officer Jonathan Van-Tam celebrated the UK's decision as a demonstration of international collaboration in the face of adversity.

"What a momentous journey it has been: discovery by two scientists who originally came from Turkey, development by a German biotech company, involvement by a massive US pharmaceutical giant and then the involvement of our own [medical regulator] to bring home the goods in terms of the UK. What a fantastic journey."

Asked about the company's achievements at a press conference on Wednesday, BioNTech's chief commercial officer Sean Marett offered a characteristically modest answer on behalf of Sahin and Türeci. "Actually I don't think we've had time to think about it because we're too busy packing vials for shipping to the UK."

The press event was held at the company's headquarters located on a street in Mainz appropriately named 'n der Goldgrube' or At the Gold Mine.

Get our Coronavirus Update newsletter for the day’s crucial developments and the numbers you need to know. Sign up to The Sydney Morning Herald’s newsletter here and The Age’s here.

Shaun Bailey plans to uncover black executives if he gets elected