Home » World News » The freezing hell of the Battle of the Bulge: In colorized images

The freezing hell of the Battle of the Bulge: Colorized images show resilience of US troops in snow camouflage advancing on Ardennes and tank crews huddling together in front of camp fires ahead of one of the most brutal encounters of WWII

Photographs that captured the Battle of the Bulge between 1944 and 1945 have been colorized, shedding new light on the battle and the conditions soldiers had to contend with. The 75th anniversary of the battle passed this year.

The Battle of the Bulge, also know as the Ardennes Counteroffensive, was the final major German offensive campaign on the Western front before the end of the Second World War in 1945. It took place between the 16 December 1944 and 25 January 1945, and was ordered with the intention of cutting Allied forces off from the Belgian port of Antwerp.

The aim was to split Allied lines, giving the German troops the opportunity to surround and destroy four Allied armies. The attack came through the densely forested region of Wallonia in Eastern Belgium, Northern France and Luxembourg. As seen in the photographs, in addition to the dense forests, soldiers had to cope with harsh winter conditions.

The attack from the Germans came as a total surprise on the 16 December 1944, with American forces receiving the most pressure. As the battle wore on, however, German forces were severely depleted and they were unable to replace their losses before the end of the war.

‘The Bulge’ was the largest and bloodiest single battle fought by the United States in the Second World War, and the third deadliest campaign in the country’s history after the Battle of Normandy and the Meuse-Argonne Offensive in World War I. 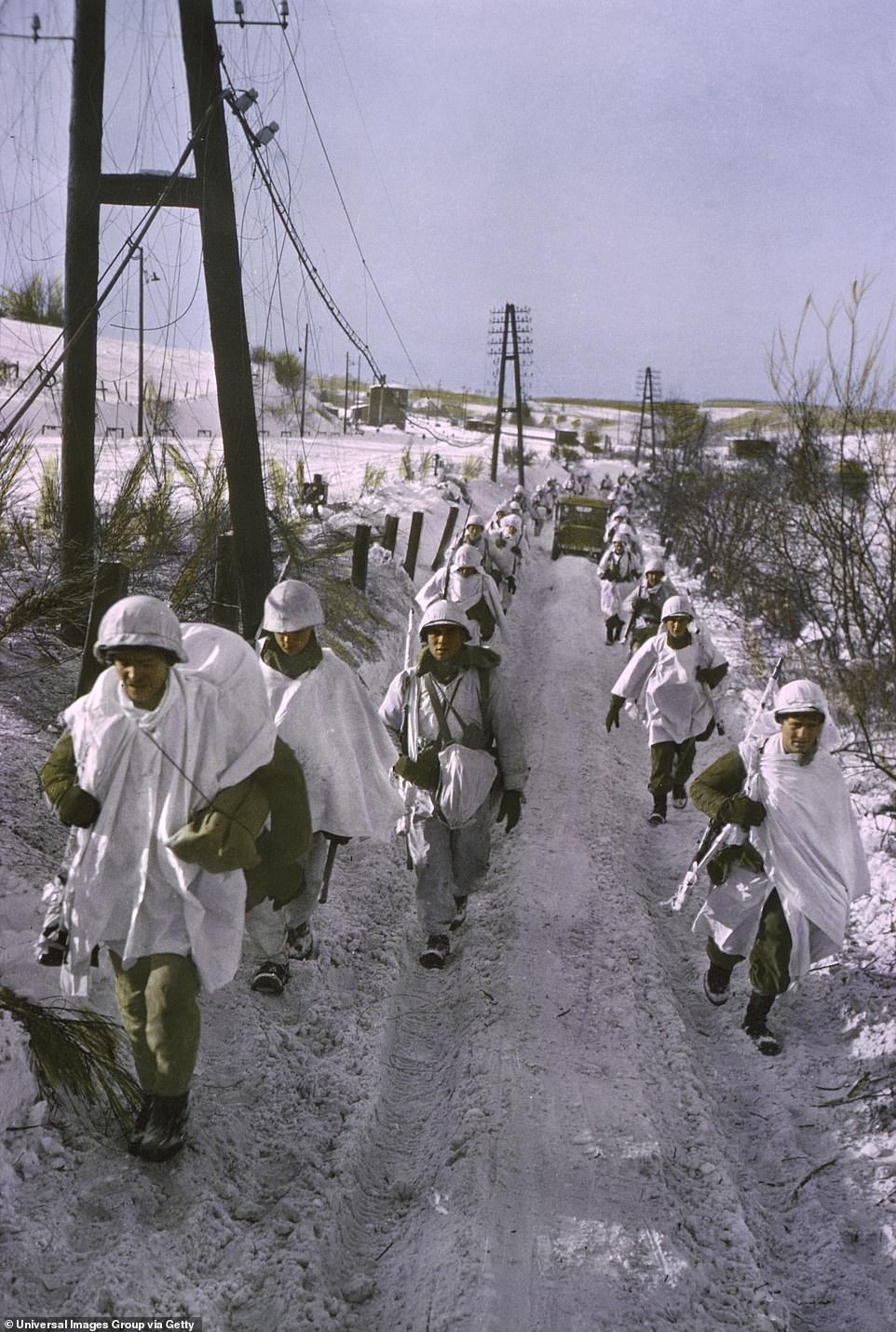 Soldiers march down a snowy track running through the western front during the Battle of the Bulge in the Second World War. They are wearing white fabric capes to camouflage themselves against in the snow to hide from enemy troops who could be watching from a distance, or targeting them with weapons 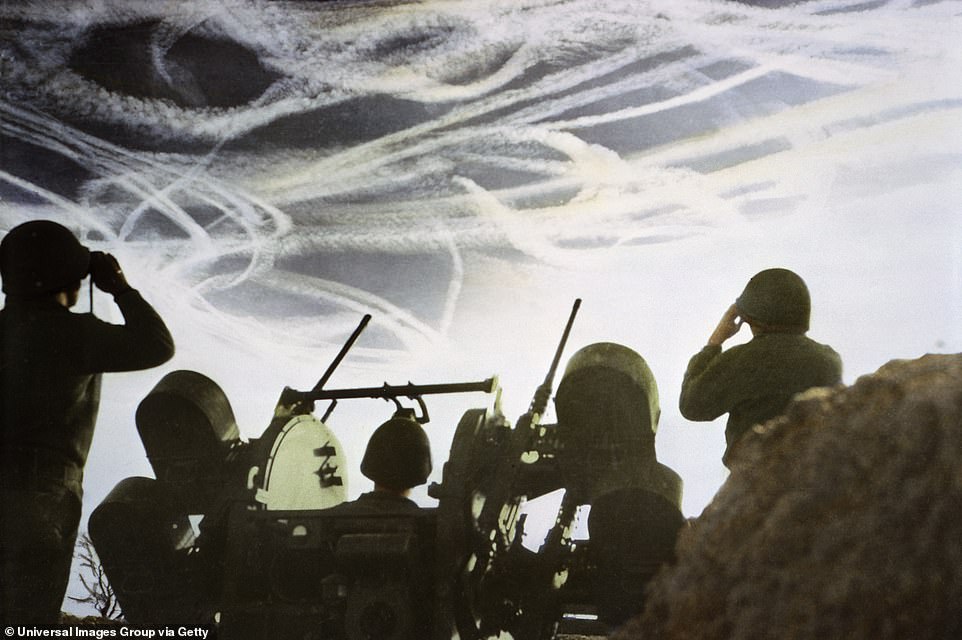 Vapor trails paint the sky after a dogfight and soldiers manning an anti-aircraft gun look to the skies for their next target. The Luftwaffe, the German air force, sustained heavy losses during the Battle of the Bulge, losing 800 aircraft. At least 500 of those were lost in December alone 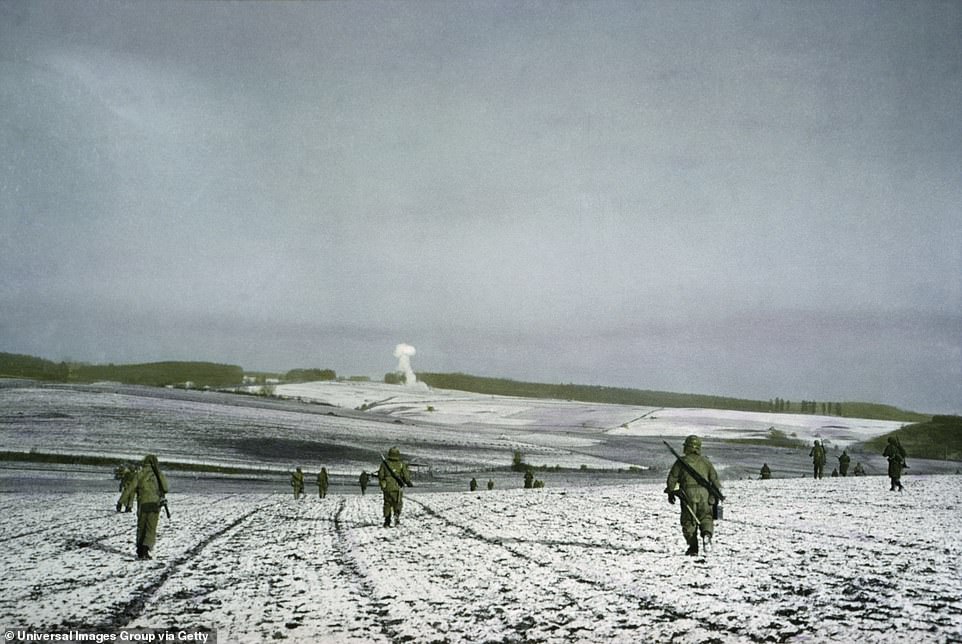 Solders spread out as they walk across a snowy field to an enemy’s position. In the distance, an explosion can be seen as a plume of smoke rises from the ground from artillery fire. To launch the offensive, Germans began with a 90-minute artillery barrage using 1,600 artillery pieces across a 130 kilometer front on the Allied troops 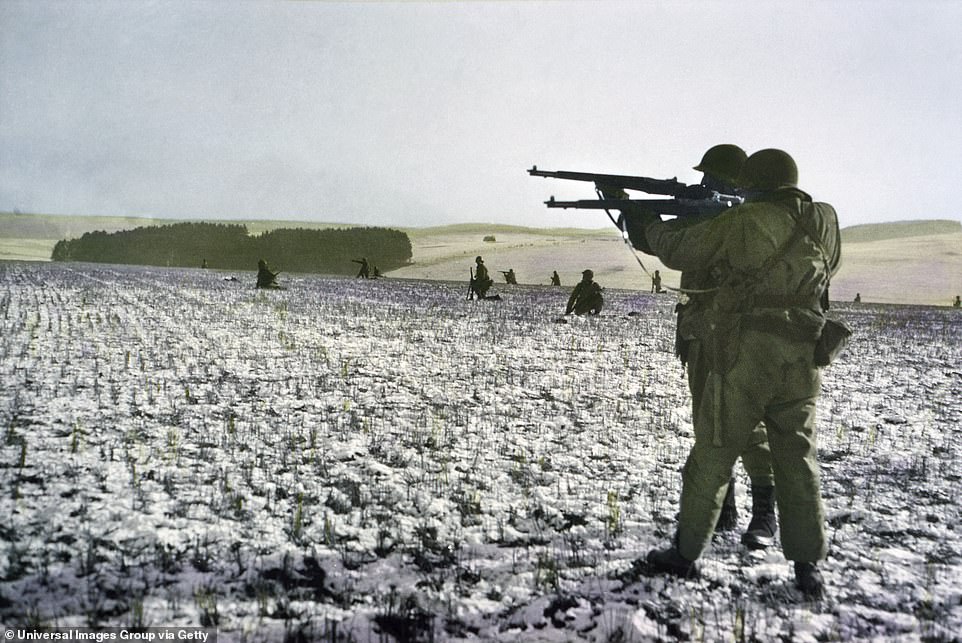 As they cross the field, two infantry men fire at German troops across a field. Others behind them can also be seen firing their rifles, while others crouch down to avoid enemy retaliation 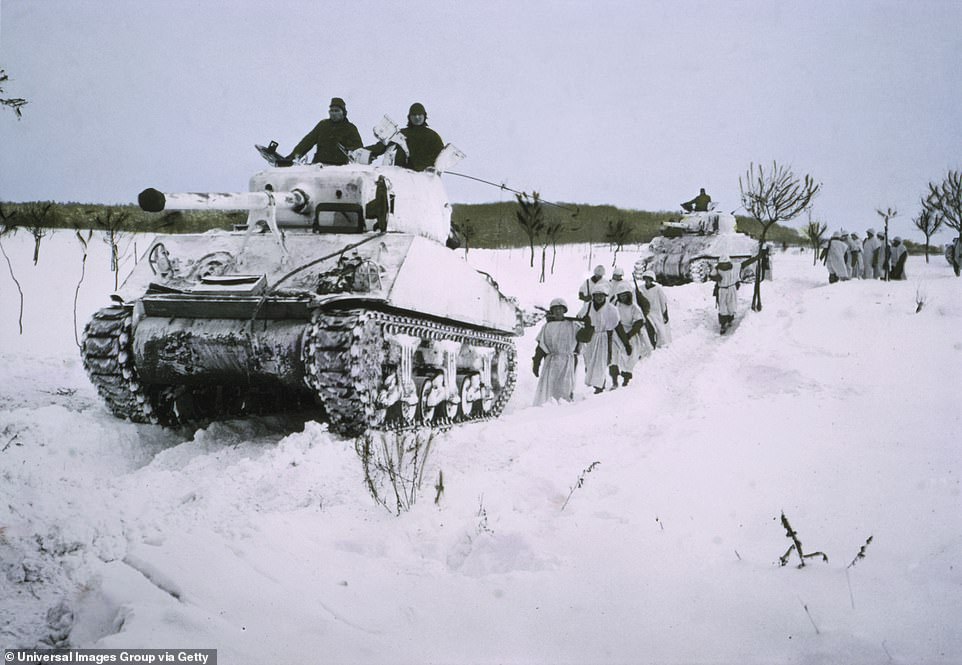 Troops tread through the snow behind a tank. The tank offers protection from any potential gunfire ahead, while also flattening the snow for soldiers to walk over as they make their way across a field. The tank is also painted white to camouflage itself against the snow, which would have made it harder for soldiers to cover ground quickly 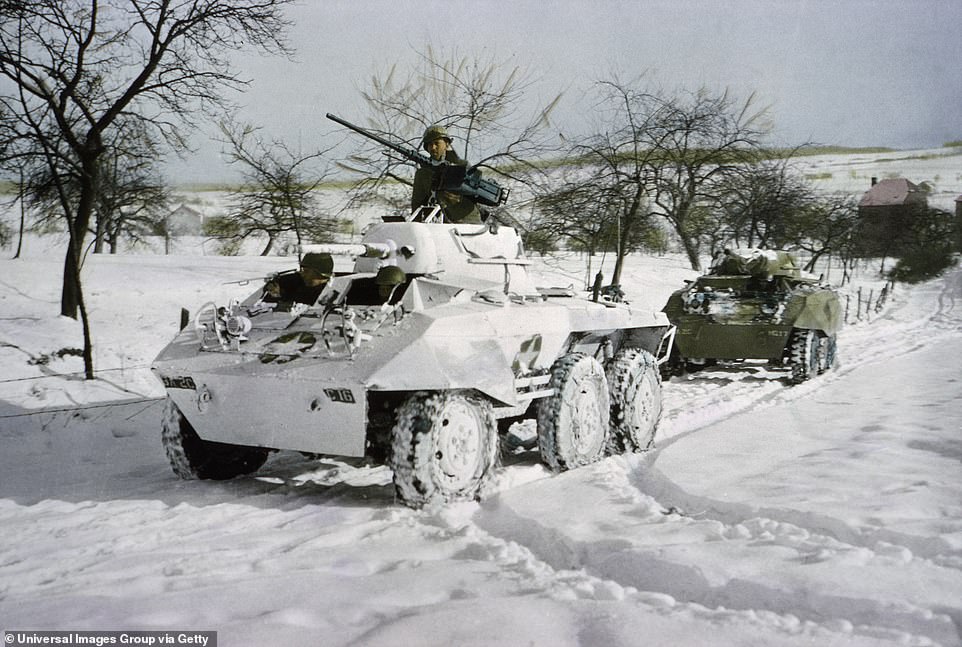 Two tanks, both Light Armored Car M8, roll across a field. The one at the back shows its true colours while the one leading the way has been painted white to mask it against the snow and potentially protect it from artillery strikes from the distance. Allied forces lost over 700 tanks during the battle, while the Germans lost 550 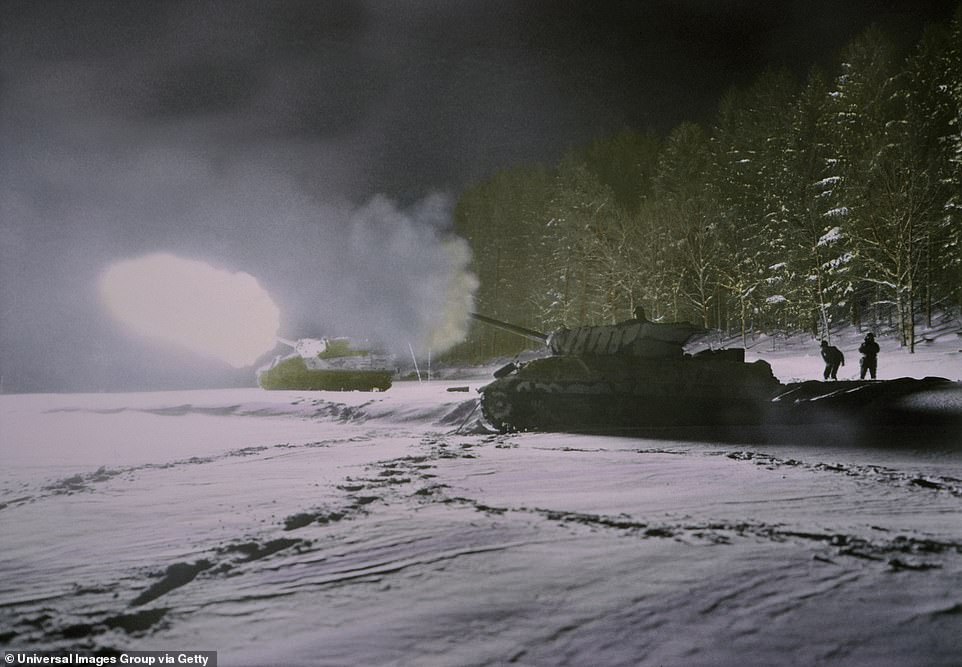 3-inch Gun Motor Carriages fire on enemy positions in the distance. The explosions from the tanks light up the snow on the ground and the trees behind them as two solders take cover behind the tanks 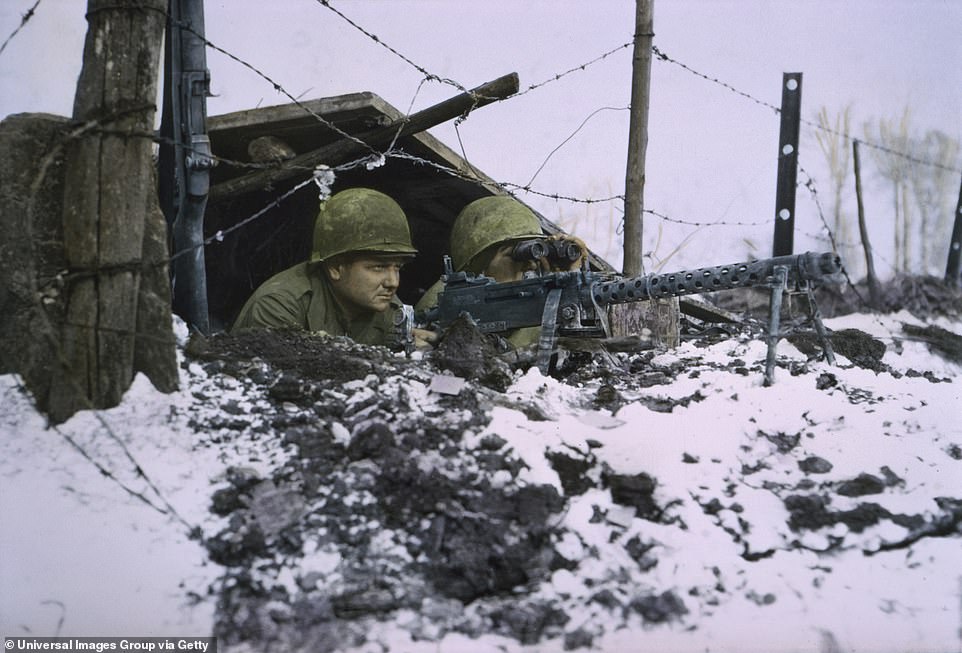 Two soldiers take up gunning positions in a bunker. One uses binoculars to spot incoming enemy troops while the other, looking down the scope of his 30-caliber machine gun, eyes the distance waiting for his fellow soldier to spot some targets 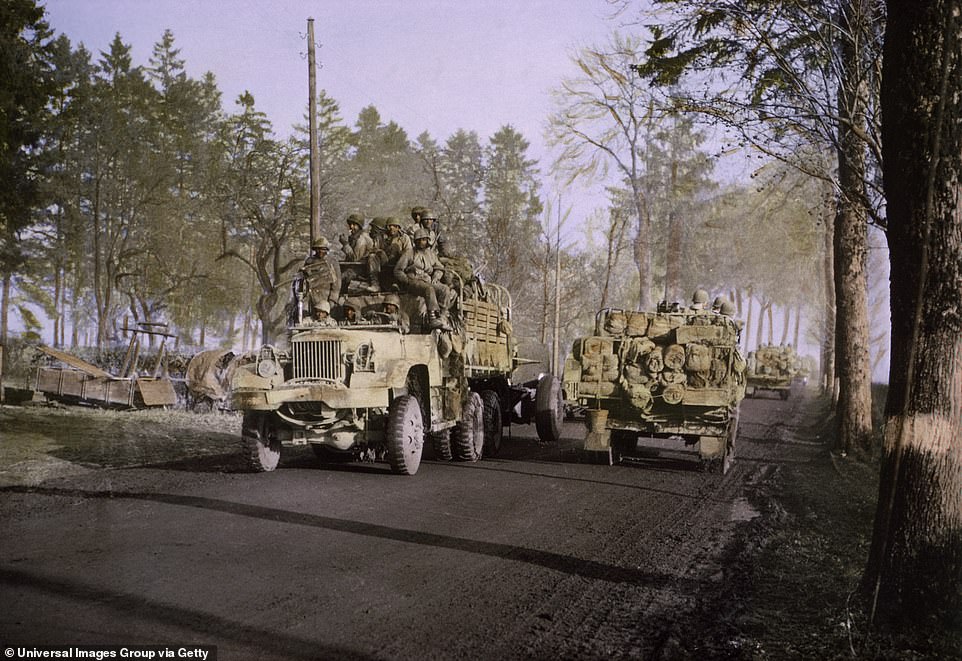 Troops are relieved of front-line duty as reinforcements arrive to take the reigns. The truck is not large enough for them all, so some are forced to sit on the roof of the cabin to bring as many solders as possible to fight on the front lines 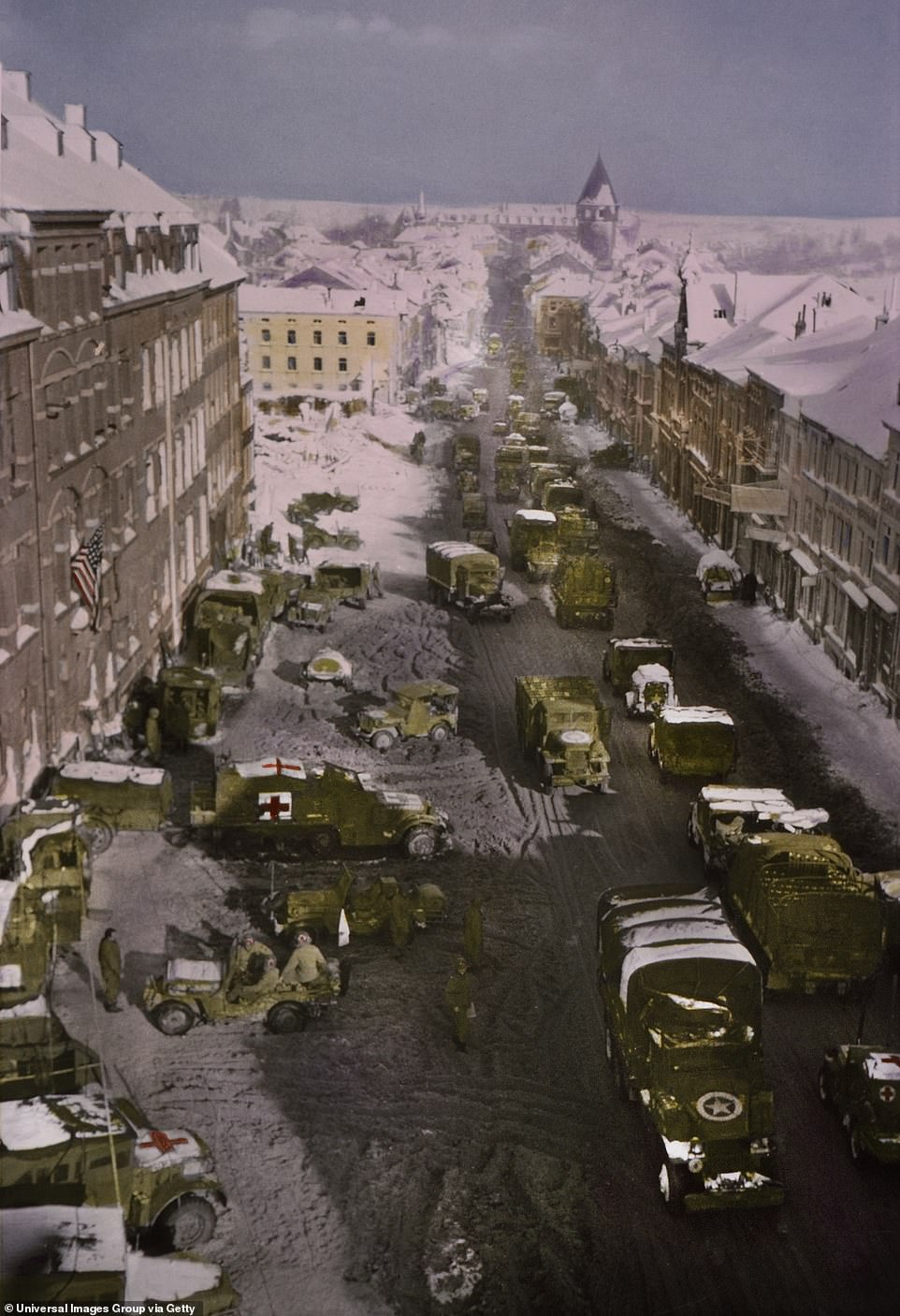 Supplies Moving Through Bastogne, Belgium, on way to Front Line. An American flag can be seen on the building with a number of medical trucks parked outside. Bastogne was situated on a road junction of great strategic importance during the battle 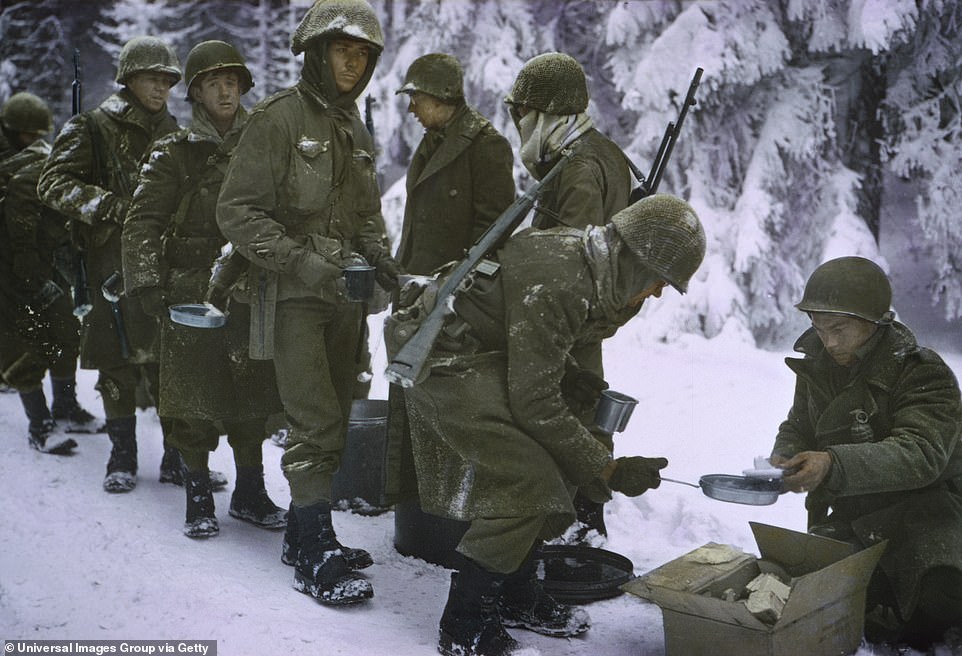 Soldiers queue up to receive food at field mess. They wear heavy expressions on their faces and have likely experienced intense fighting while also having to stay warm in freezing conditions. Each solder has multiple layers on, gloves and heavy boots, with their rifles strapped to their backs as they eat 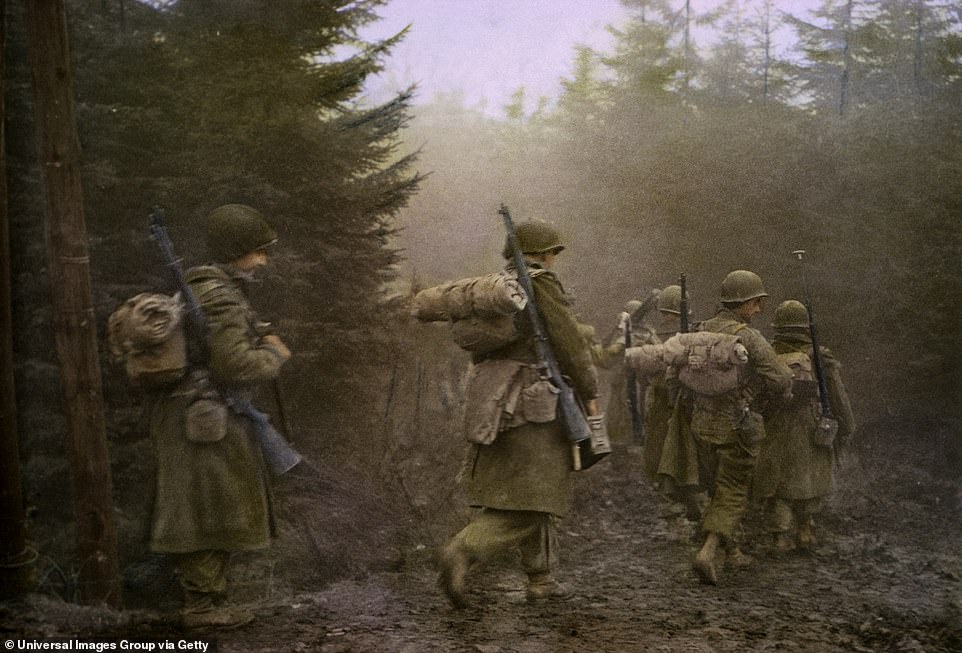 Members of Airborne Division walk through a forest. The area the battle took place in was heavily forested, with some battles taking place among the trees 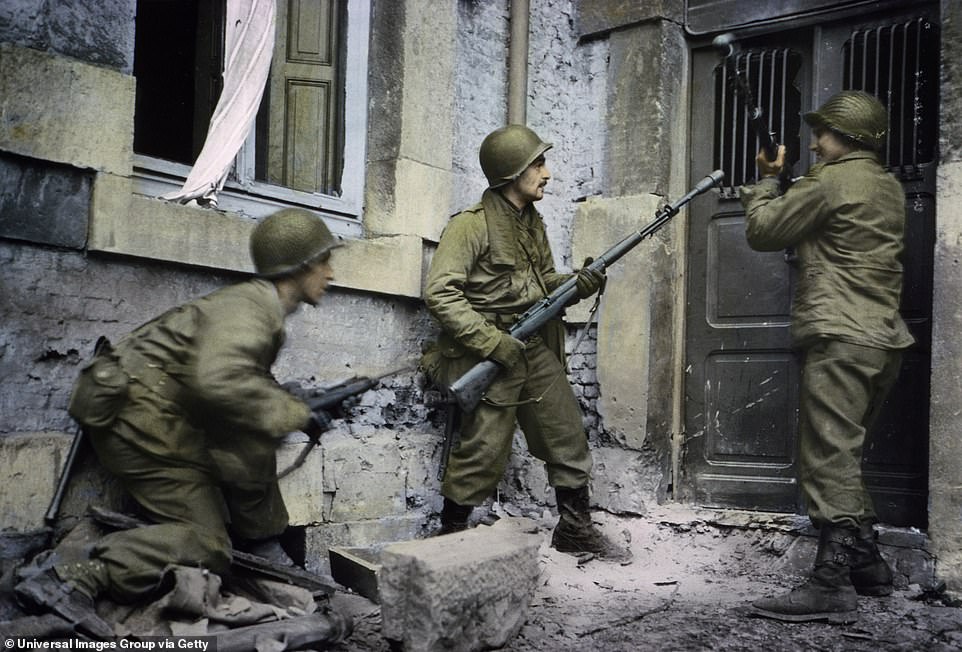 Infantrymen  use their weapons to battle down a door of a house where German snipers are hiding out. One hits the door while the other two prepare themselves for the threat that may be found within 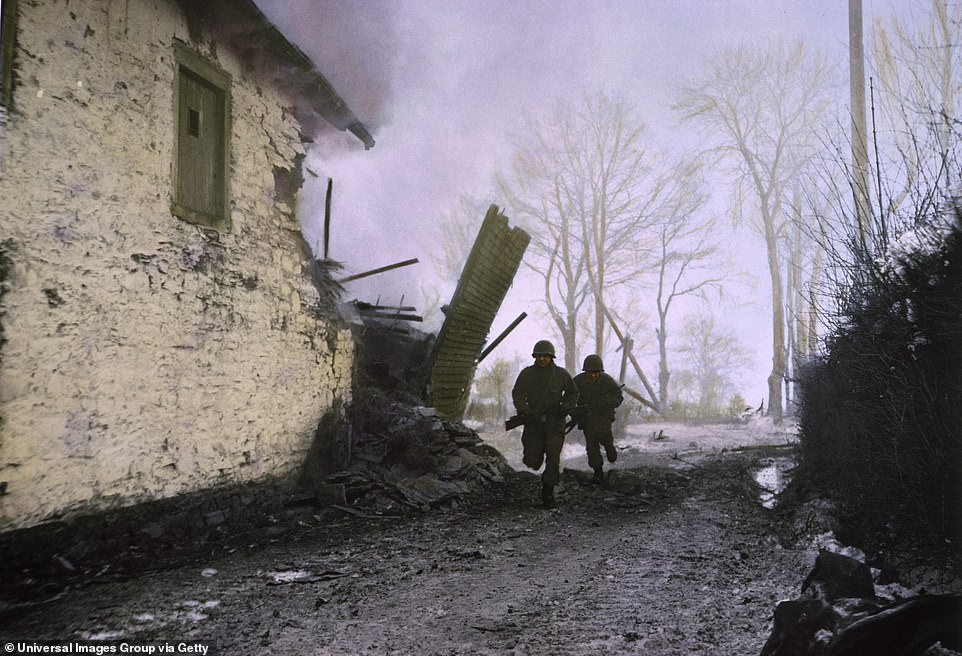 Two soldiers sprint past a building while under heavy shellfire. The building is heavily damaged from shells, with smoke coming from the hole is the side of the house suggesting the shell that hit it was recent 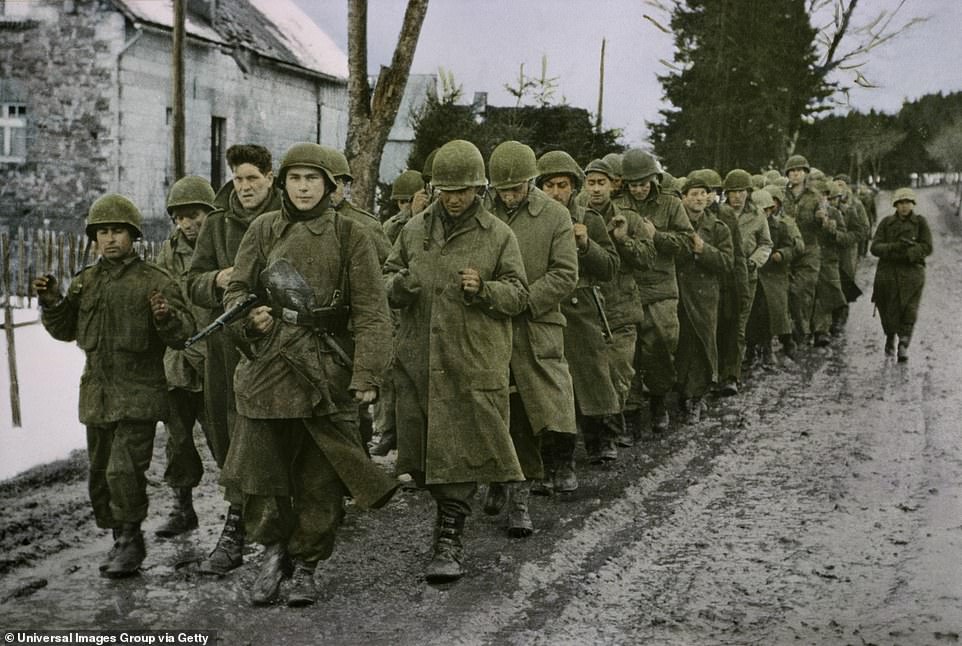 U.S. prisoners of war are taken early by the German forces. They are marched down the road by German soldiers carrying weapons 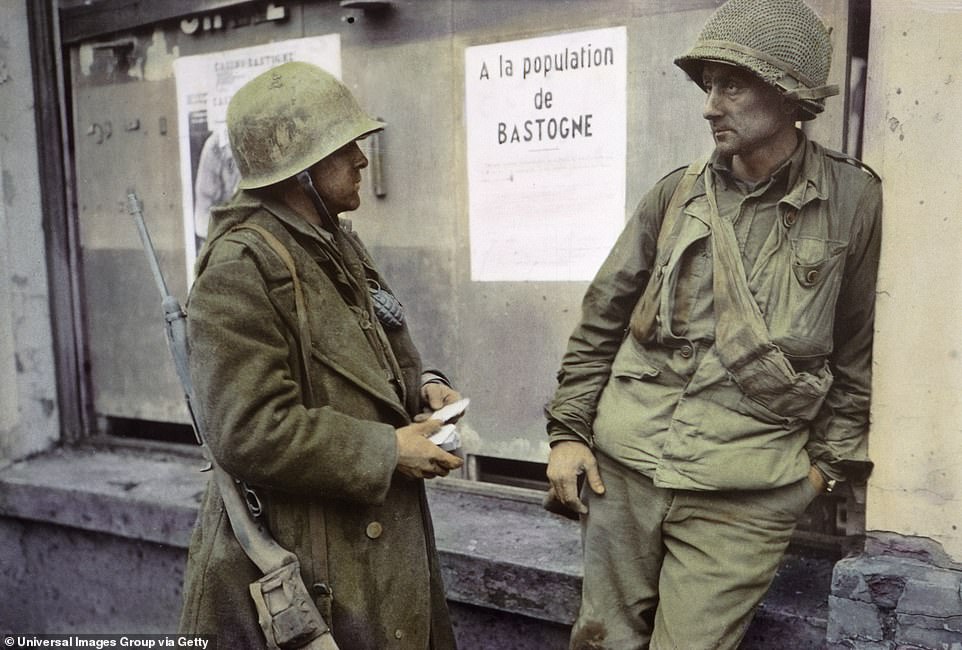 Soldiers take a break in Bastogne, Belgium. One leans up against a wall while the other, gun on back and grenade attacked to his coat, holds what could be a pack of cigarettes 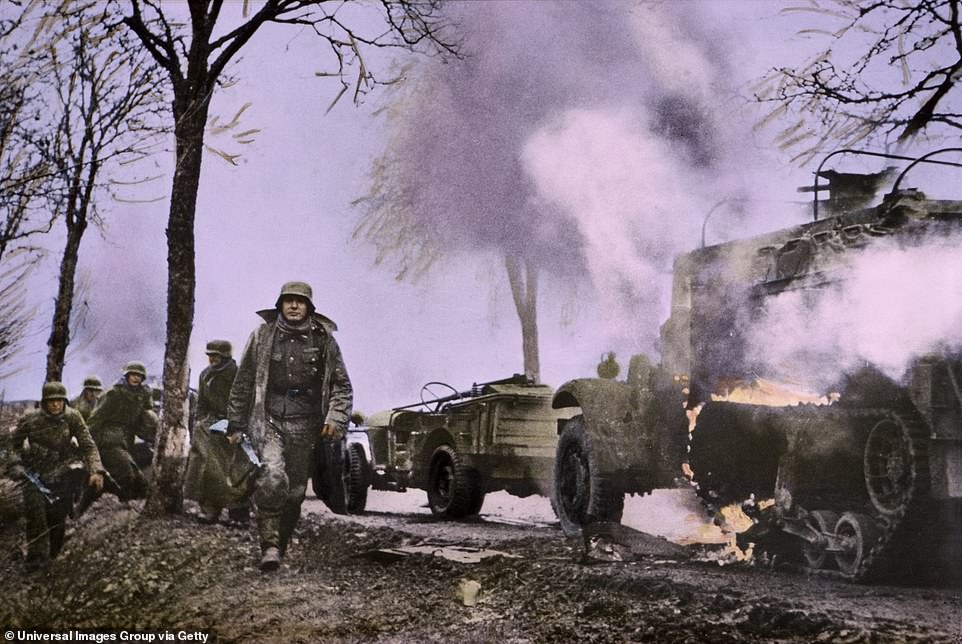 German troops walk past burning U.S. vehicles which have been taken down and rendered unusable by shells. The soldiers look pleased with themselves for being able to bring down the vehicles 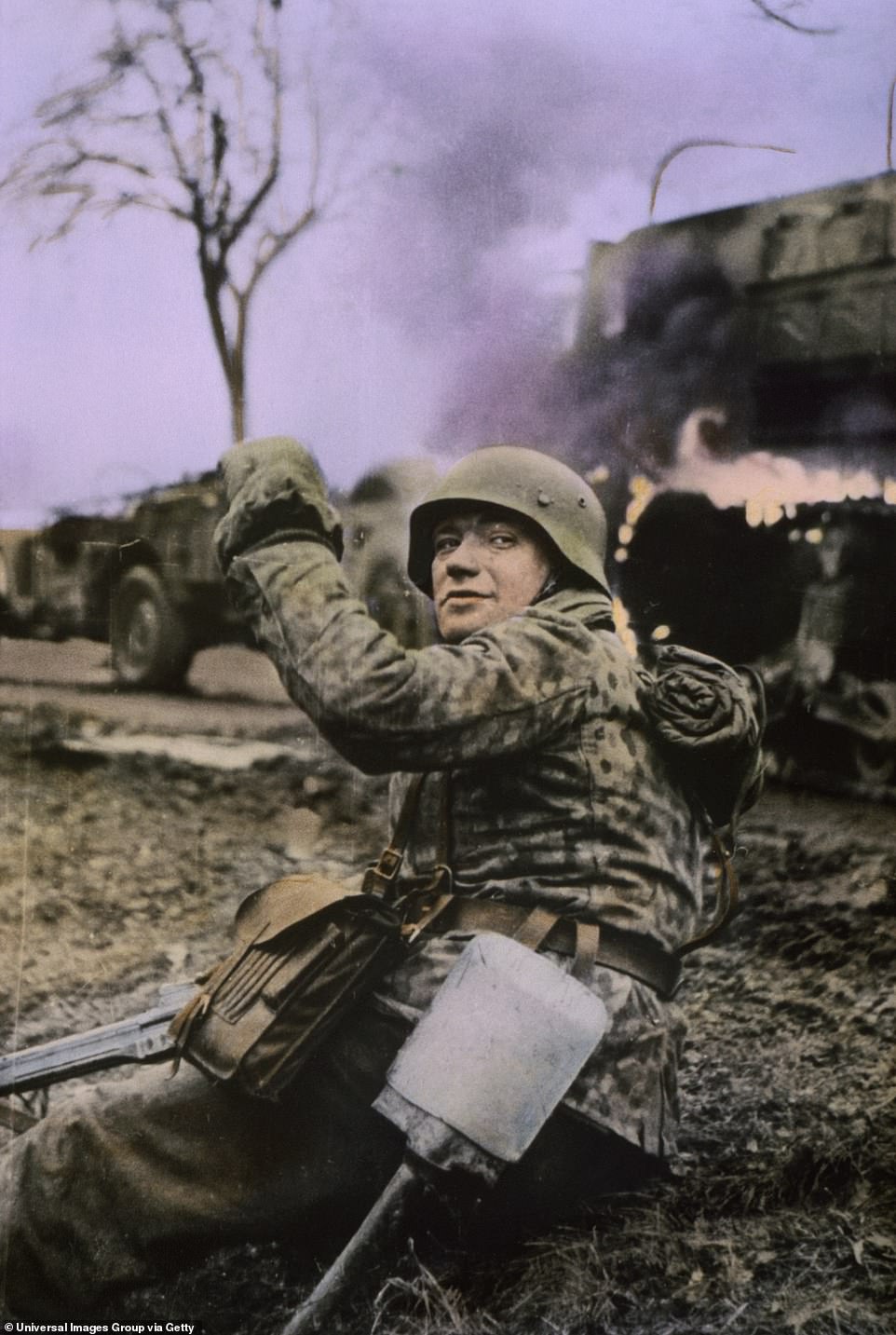 A German soldier, crouching on the ground, waves his unit forward past U.S. equipment that can be seen burning behind him 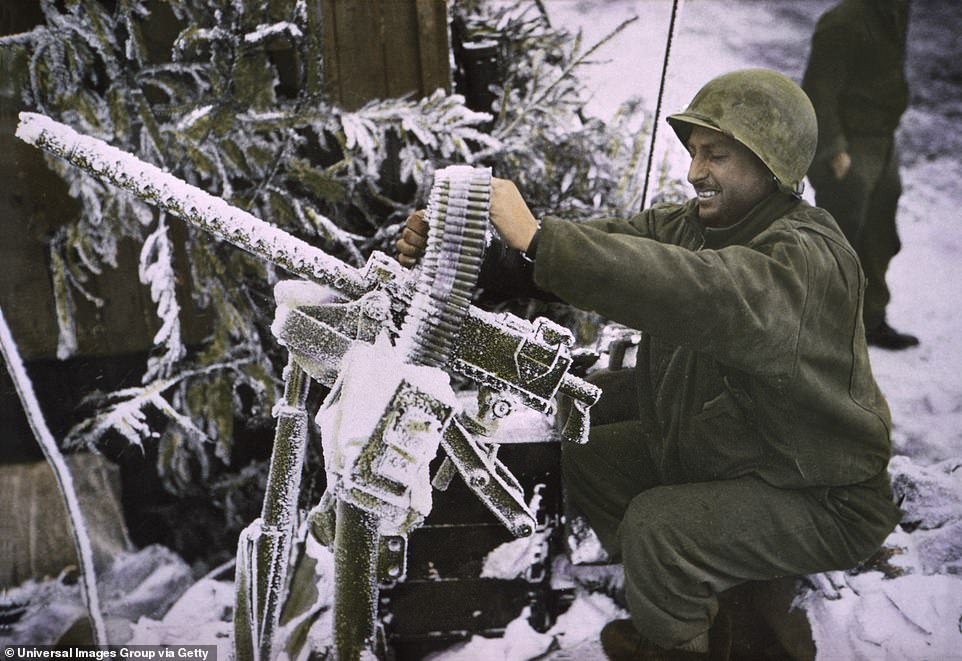 A member of Cavalry Reconnaissance Squadron Checks .30-caliber Machine Gun is ready to use when needed 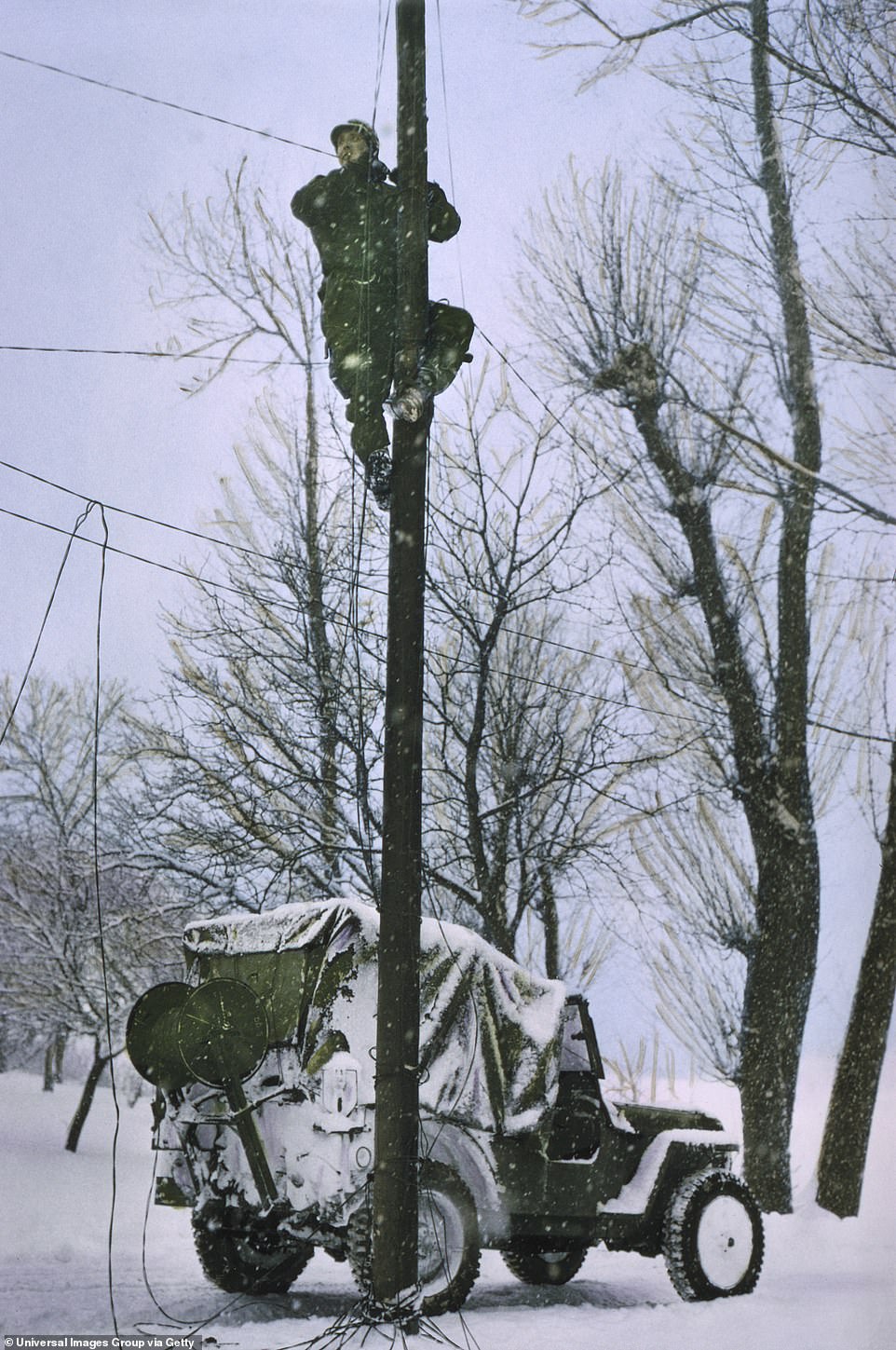 A Signal Corps Lineman repairs damaged telephone lines. The lineman has climbed well above his car without a harness. Repairing telephone lines was vital to ensure groups of soldiers could still communicate across the battlefields 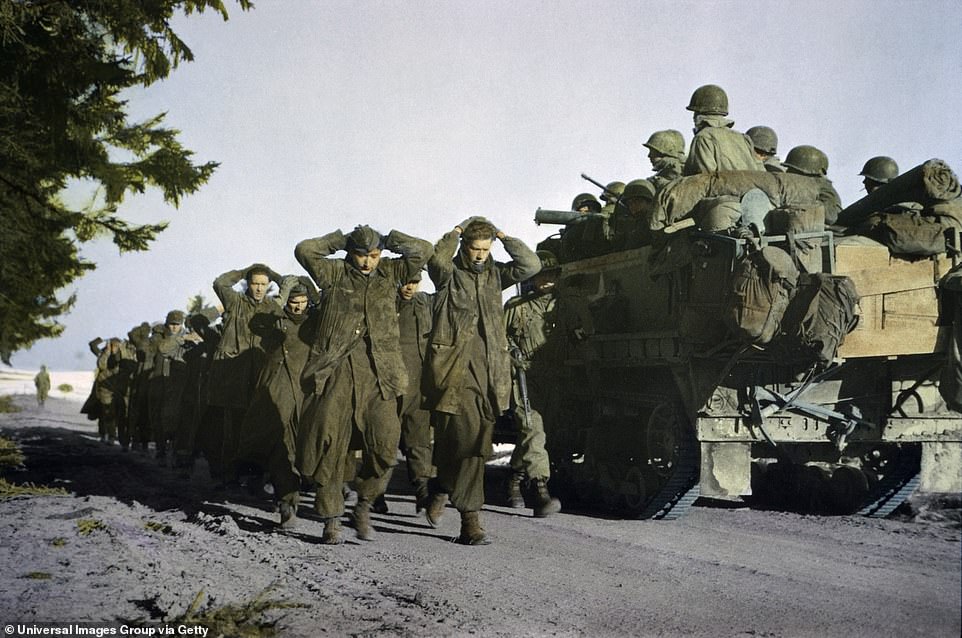 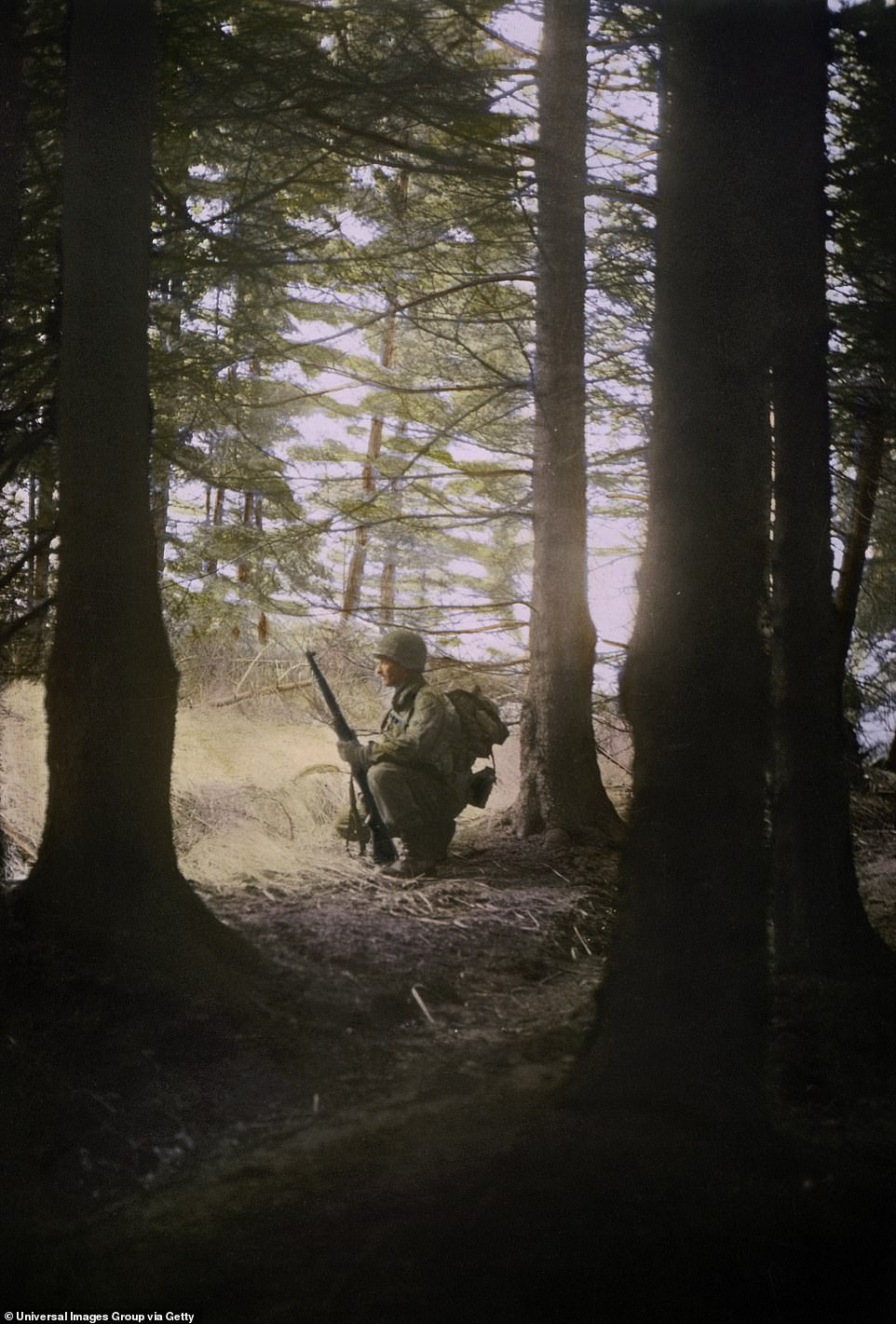 An infantryman takes a moment to himself among the trees before advancing, keeping a watchful gaze through the forest 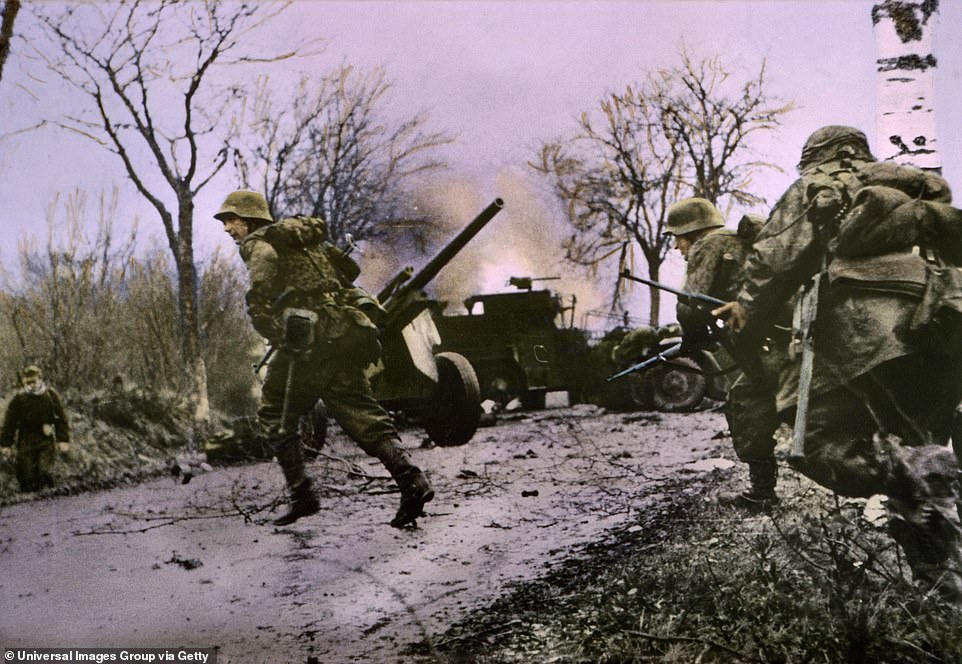 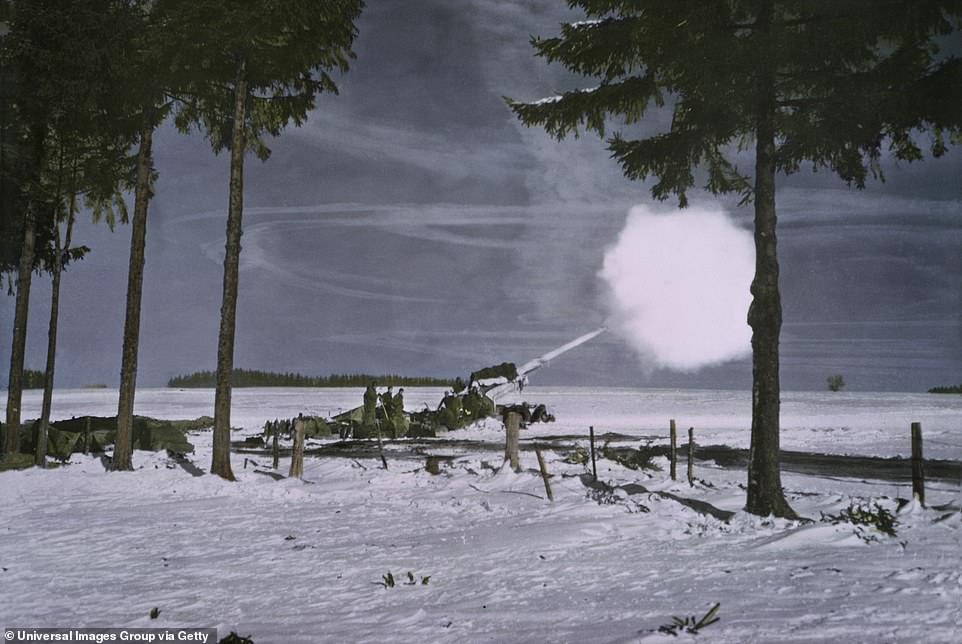 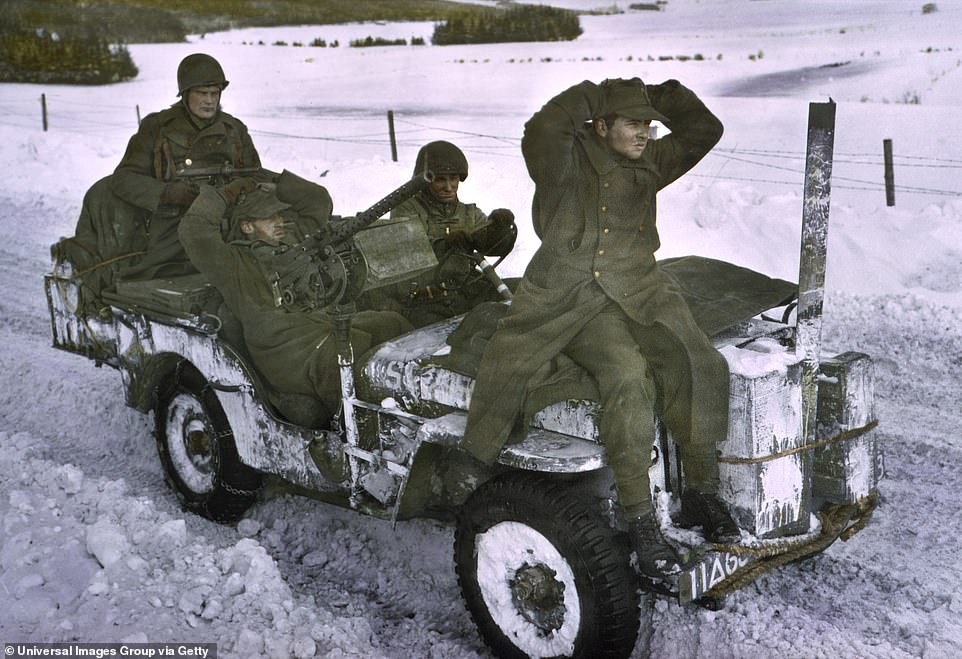 Two German prisoners are brought in by two U.S. troops on their car. One drives while the other holds a gun, ordering them both two put their hands of their heads 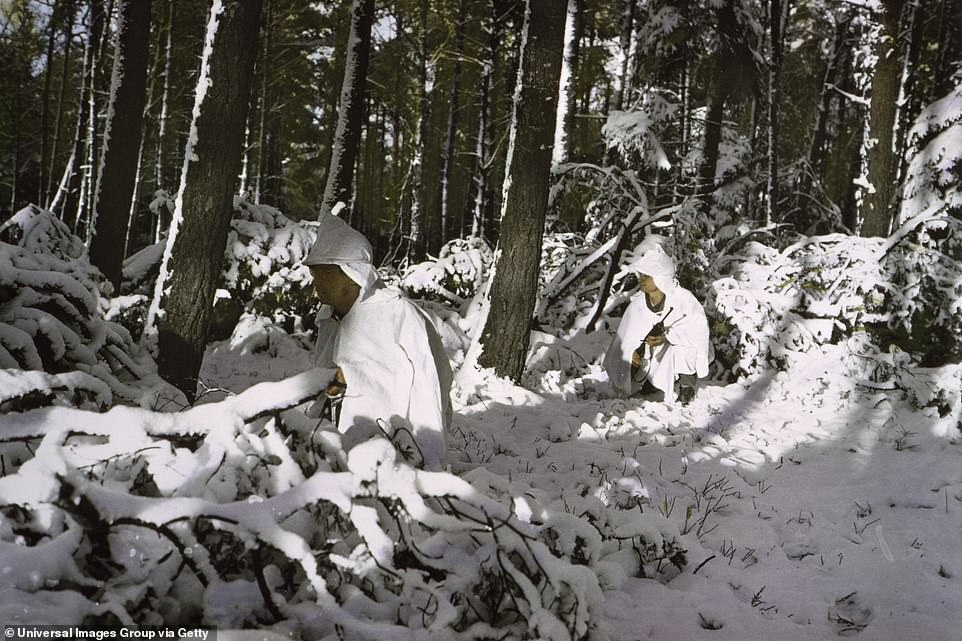 Infantryman wearing snow capes hide amongst tress and bushes in a forest, rifles in hand, waiting to advance 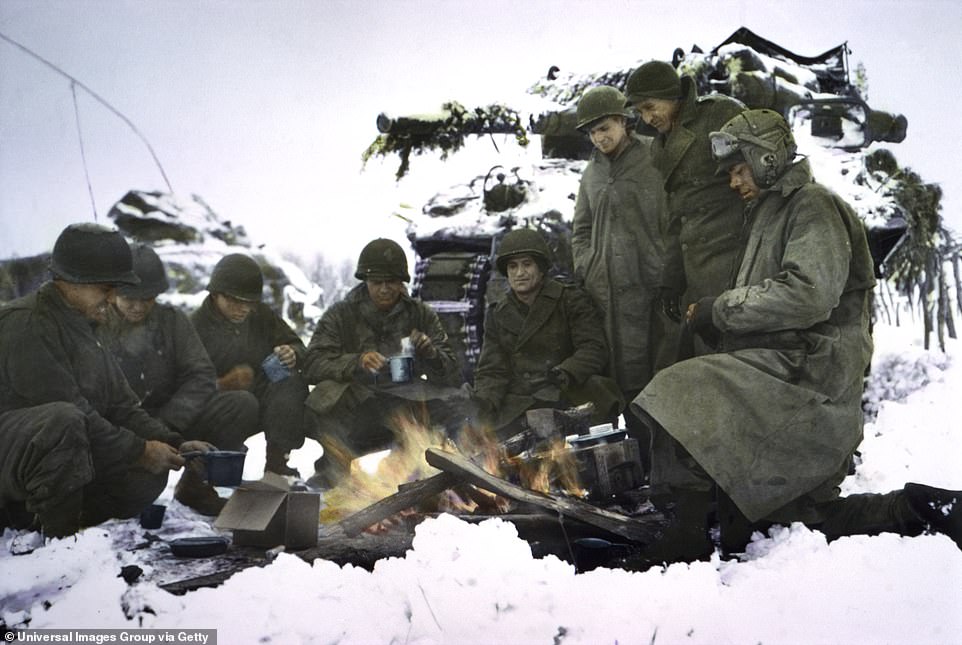 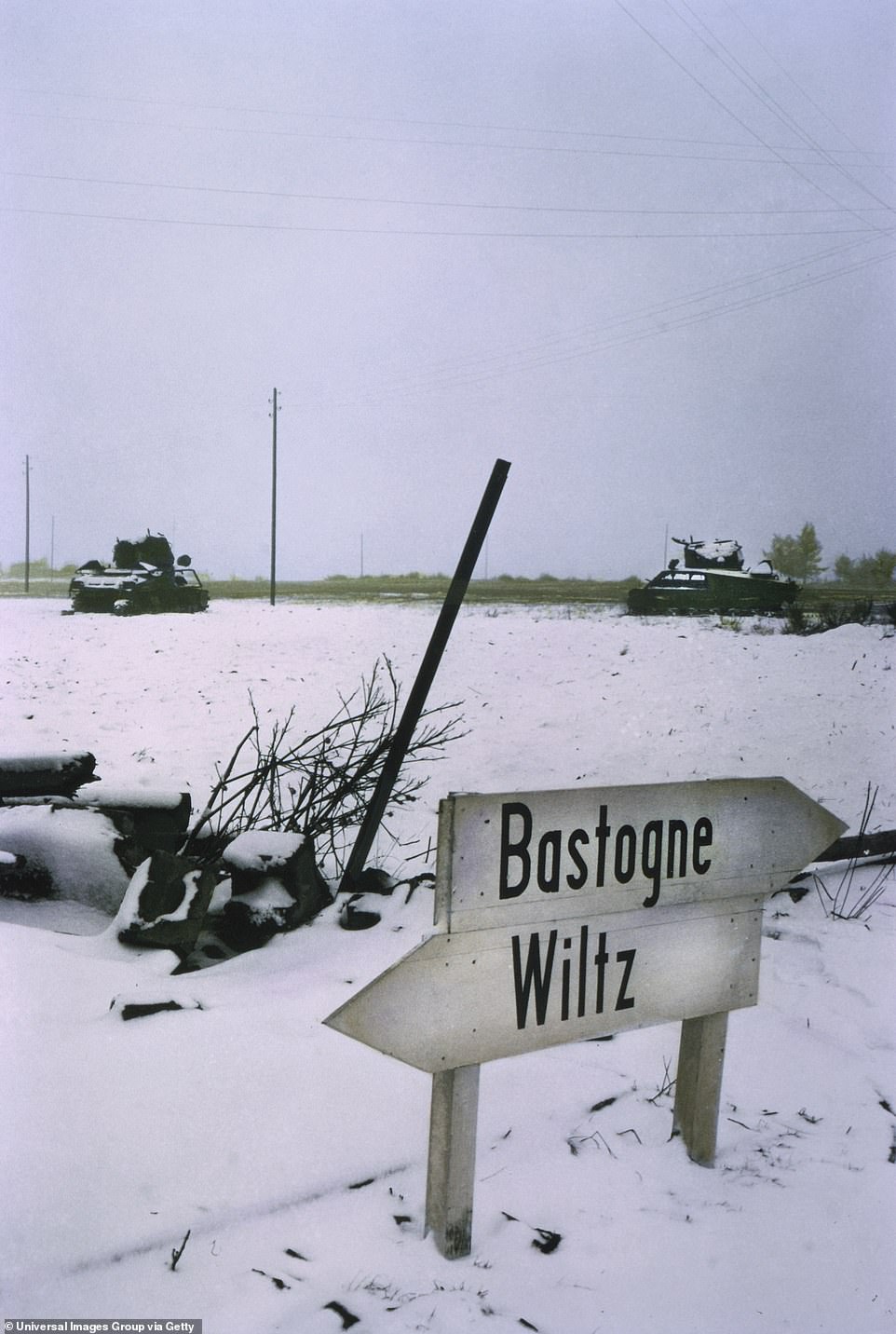 Bastogne in Belgium to the East and Wiltz in Luxembourg to the West. Two knocked out tanks sit in a field close to the border between the two countries, around which much of the fighting happened in the Battle of the Bulge

Did 400 women suffer at hands of this gynaecologist?

‘Incomprehensible to us’: Roald Dahl’s family apologises for his anti-Semitism