The American way of life has changed: The full list of states on lockdown as the battle against coronavirus turns parts of the U.S. into ghost towns

As officials across the country curtailed many elements of American life to fight the coronavirus outbreak restaurants, bars and schools across the United States were forced to close their doors.

It has left parts of the country already look like ghost towns, and others are about to follow as theme parks closed, beaches shooed way spring breakers and states and large cities ordered bars and restaurants shuttered.

Here DailyMail.com takes a look at the full list of closures across each state.

Jefferson County restaurant are take out only, child care centers are closed and visits to nursing homes have been restricted.

Public gatherings of more than 25 people banned across the state.

All public schools closed until April 6.

Jefferson County Health Officer Mark Wilson said: ‘I know this has a big impact on our community. It’s quite restrictive.’

The Alabama Department of Public Health on Monday urged people statewide to avoid gatherings of more than 50 people, unless they can maintain a 6-foot distance between others, to limit spread of the new coronavirus.

Anchorage – a ban on dine-in service from 5pm Monday until March 31.

The mayor of Anchorage signed the order Monday closing gyms and entertainment venues and barring restaurants, bars and other establishments from offering dine-in service to the public through the rest of March.

All liquor stores and licensee service centers will close indefinitely at 9pm on Tuesday. 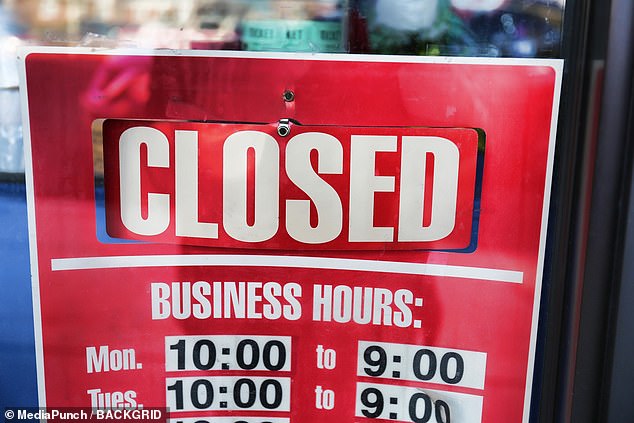 Coronavirus related signs throughout Philadelphia and surrounding suburbs in Pennsylvania 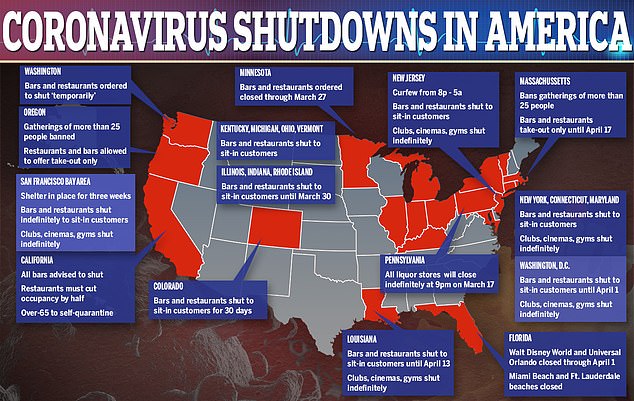 All bars, nightclubs, casinos, movie theaters, gyms and health clubs will be closed until April 13. Restaurants may open for take-out options only.

Public gatherings of 50 people or more will be banned. No one will be allowed to eat onsite at a restaurant.

Gatherings of more than 50 people banned.

Hospitals across the state are restricting visitation, and some, including UConn Health in Farmington, have announced the indefinite postponement of elective surgeries.

Gatherings of more than 25 people banned.

Bars and restaurants to offer take-out only until April 7.

Boston Mayor Marty Walsh is shutting down construction sites across the city. Walsh also announced all branches of the Boston Public Library will close.

Curfew from 8pm – 5am; gatherings of more than 50 people banned; bars and restaurants shut indefinitely for dine-in customers, but can offer take-out.

The new region-wide closure for gyms, casinos and theaters was ordered by the governors of New Jersey, New York, Connecticut and Pennsylvania. 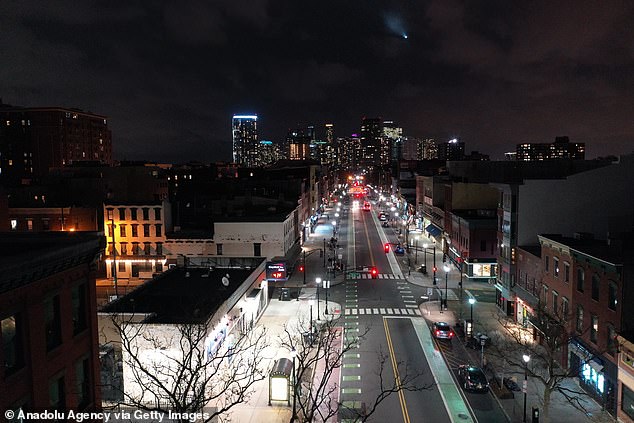 Empty roads are seen in New Jersey, New Jersey residents were told on Monday that they should not go out from 8 p.m. to 5 a.m.

Gatherings of more than 50 people banned

Bars and restaurants shut indefinitely for dine-in customers, but can offer take-out 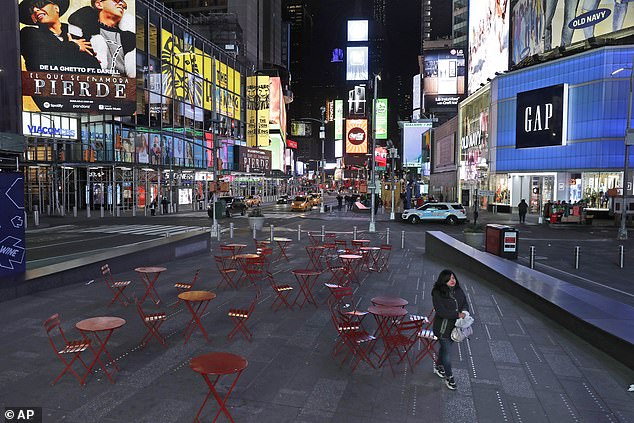 A woman walks through a lightly trafficked Times Square in New York, Monday

New York City announced its public school district, the nation’s largest, will be closed starting Monday, joining most of the rest of the country

Bars and restaurants shut to dine-in customers until March 30 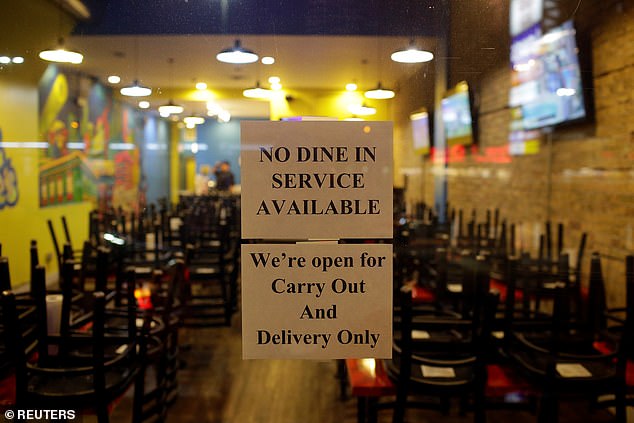 Signs are displayed on the window of a restaurant to inform customers that the dinning area is closed as Illinois Governor J.B. Pritzker ordered all restaurants and bars closed at the end of the business day, as part of efforts to combat the spread of the novel coronavirus, in Chicago 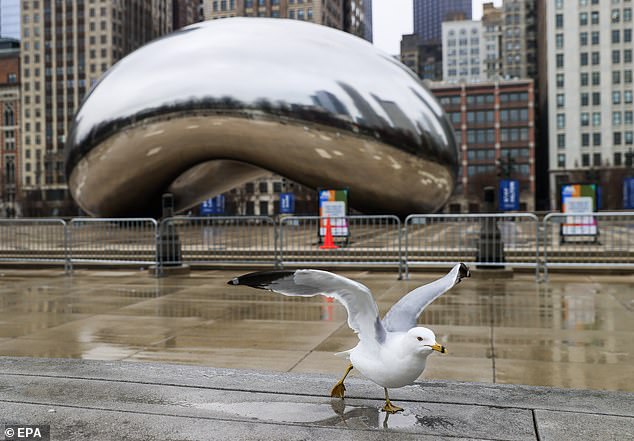 Bars and restaurants shut to dine-in customers until March 30.

Bars and restaurants shut to dine-in customers, but can offer take-out.

Ohio marked St. Patrick’s Day on Tuesday with no parades and no primary election over fears of the coronavirus. Health Director Dr. Amy Acton issued an order late Monday shutting down polls Tuesday.

Youngstown State University and Capital University in Columbus were among those announcing the cancellation of May commencement ceremonies, saying they couldn’t comply with restrictions severely limiting the size of gatherings. 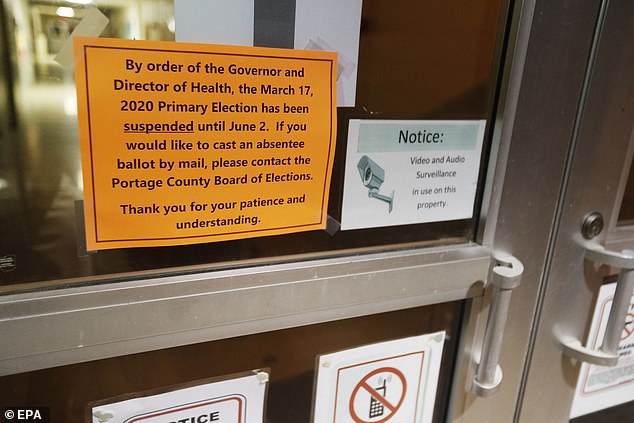 Signs posted on the locked doors of a polling place in Kent, Ohio

Bars and restaurants shut to dine-in customers indefinitely, but can offer take-out.

The Detroit Department of Transportation canceled bus service shortly after 8 a.m. due to the shortage of drivers.

Gov. Gretchen Whitmer has banned more than 50 people in a gathering at a time.

Whitmer issued a sweeping order Monday banning dine-in customers at restaurants and closing all bars, movie theaters, gyms and other sports facilities to curb the spread of the coronavirus. The measure was to last through March.

Besides those restrictions, all Michigan schools are closed.

Gatherings of more than 50 people banned for at least two weeks.

Gov. Tim Walz ordered bars and restaurants across Minnesota to temporarily close to customers who dine in.

Delivery and curbside takeout services may continue to operate. The temporary closure also applies to other places of public amusement, including theaters, museums, fitness centers and community clubs.

Affected businesses must close by 5 p.m. Tuesday. While the governor’s order runs through March 27, he said he’ll likely end up extending it. Supermarkets, pharmacies and other retailers are not affected.

Gatherings of more than 25 people banned.

Restaurants and bars allowed to offer take-out only.

Gov. Kate Brown on Monday banned on-site consumption at bars and restaurants around the state for at least four weeks in a bid to slow the spread of the new coronavirus and said gatherings will be limited to 25 people or fewer.

Restaurants can still offer takeout or delivery, she said at a news conference.

All bars advised to shut, restaurants cut occupancy by half and over 65s are told to self-quarantine.

San Francisco Residents are ordered to ‘shelter in place’ in five counties. Residents in the city are legally banned from leaving their homes for three weeks for non-essential reasons.

Disneyland closed to the public. 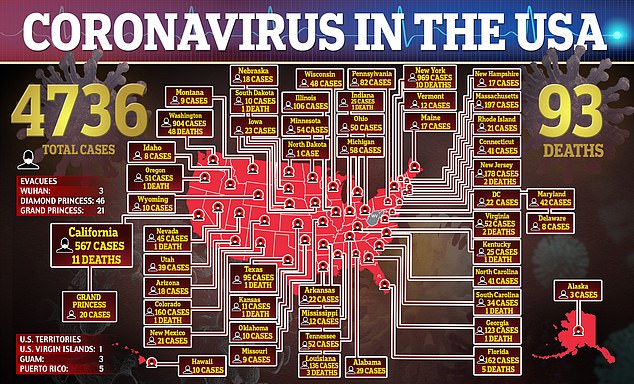 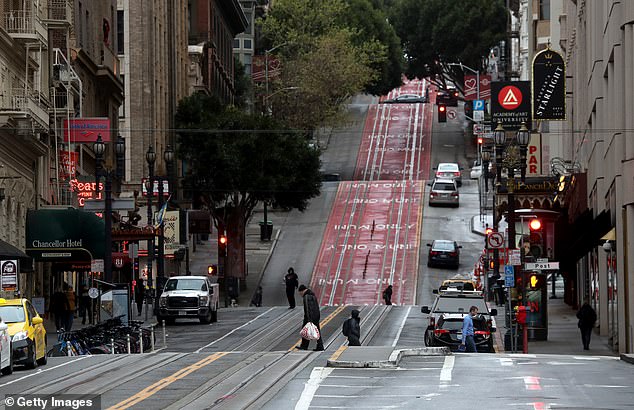 Pedestrians on Powell Street during commute hours on Monday in San Francisco, California

Restaurants, bars and clubs to shut down by 10pm Monday, with take-out and delivery still available until April 1.

Health clubs, spas, massage parlors and theaters to shut down. 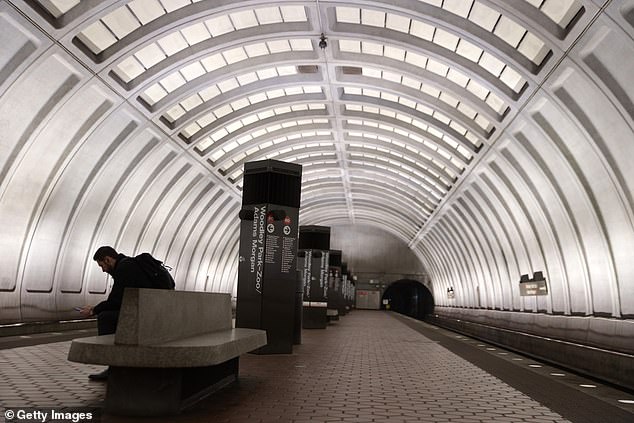 A passenger waits for his train at an almost empty platform at Woodley Park-Zoo/Adams Morgan Metro station on the Red Line March 16, 2020 in Washington, DC 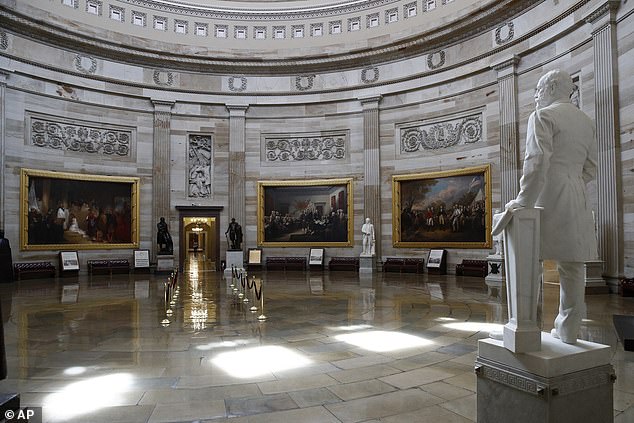 The U.S. Capitol Rotunda sits empty on Capitol Hill in Washington on Monday

Bars and restaurants shut indefinitely for dine-in customers, but can offer take-ou.t

In Florida, Walt Disney World and Universal-Orlando closed Sunday night for the rest of the month, joining their already closed California siblings.

All bar and nightclubs are set to close. 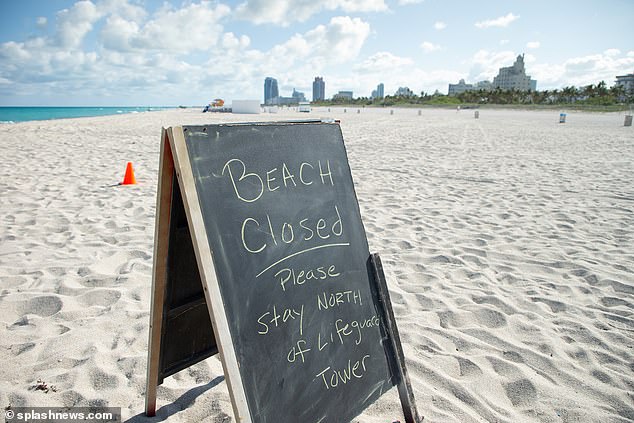 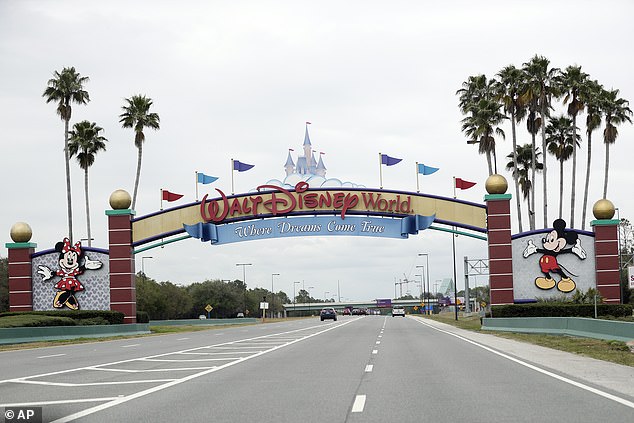 The Magic Kingdom, Epcot and Hollywood Studios were closed along with other theme parks around the state to help curb the spread of the coronavirus

Nevada Gov. Steve Sisolak says all public, private and charter K-12 schools in the state will be closed Monday until at least April 6 in an effort to stop the spread of the coronavirus

Restaurants closed to dine-in customers for the next 30 days

Bars, nightclubs and restaurants closed for dine-in with and takeout allowed until the end of March

All restaurants, bars, coffee shops shut down for dine in until March 30

Bars and restaurants can only serve takeout from Tuesday night

All schools closed through March 27.

Restaurants will be limited to offering to-go service, and bars, theaters, fitness centers and indoor recreation facilities will be closed in Flagstaff under a proclamation issued by the city’s mayor over concerns about the spread of the new coronavirus.

The closures go into effect Tuesday at 8 p.m. in the mountainous city.

All schools closed from Tuesday.

Arkansas casinos are closing temporarily because of concerns about the coronavirus.

Arkansas’ largest city is imposing more restrictions, including a curfew, in an effort to curb the spread of the new coronavirus as the number infections in the state continues to rise.

Mayor Frank Scott said Monday that a curfew from midnight to 5 a.m. will be in effect in Little Rock beginning early Wednesday. 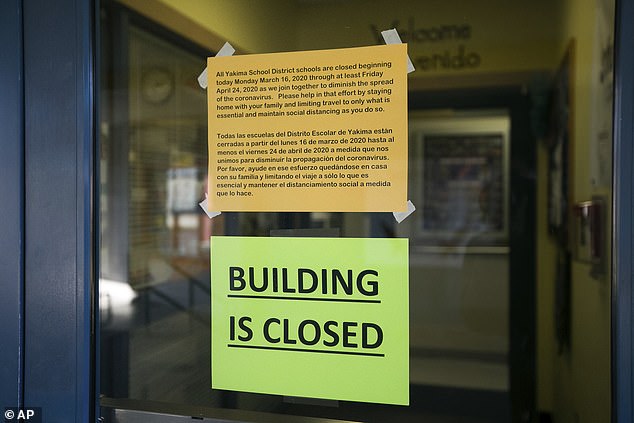 All restaurants closed for dine-in, take out and delivery continues

Bans on public gatherings of 50 or more people

All public schools and universities closed

Boise: State of emergency declared Monday, city buildings closed with the exception of the Boise Airport

Dozens of Iowa school districts are following the governor’s guidance and suspending classes for four weeks to stem the spread of the new coronavirus.

And after legislative leaders made a similar decision to suspend the legislative session, lawmakers began the process Monday of at least temporarily shutting down their work at the Capitol.

In Kansas, Democratic Gov. Laura Kelly on Monday banned public gatherings of 50 or more people for the next two months. 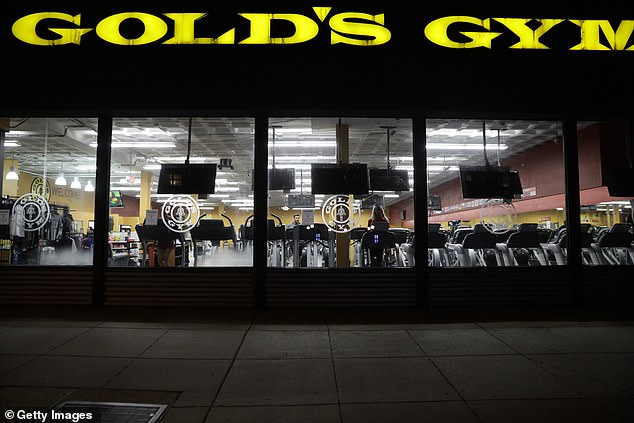 People work out at a Golds Gym March 16, 2020 in Washington, DC. The Trump administration issued guidelines on Monday recommending that no more than 10 people gather in one place at the same time in order to help reduce the outbreak of the coronavirus

Maine’s largest city, Portland, declared an emergency and adopted a curfew to prevent the spread of the virus on St. Patrick’s Day.

The curfew applies to establishments where groups gather all day Tuesday and from 8 p.m. to 2 a.m. from Wednesday to Saturday.

L.L. Bean is closing all of its retail stores across the country, including its flagship store in Freeport, Maine, to prevent the spread of the new coronavirus.

The North Haven Select Board voted Sunday to ban visitors and seasonal residents immediately to prevent the spread of the coronavirus to the Penobscot Bay island, where there have been no cases yet.

Omaha bars and restaurants limited to 10 and under patrons

Restaurants will be restricted to take-out, schools are shut down and large public gatherings are being banned in an effort to contain the coronavirus in New Hampshire.

New Hampshire’s directive, which extends until April 7, also will ban public gatherings of 50 people or more.

Restaurants and bars to operate at 50 per cent capacity; tables must not seat more than six people, and must be separated by at least six feet.

North Carolina Gov. Roy Cooper is ordering all restaurants and bars be closed to dine-in patrons.

Cooper’s office announced he would issue a new executive order directing the closings effective at 5 p.m. Tuesday. The establishments can continue to offer takeout and delivery.

No mandated closing of restaurants and bars.

Two-week closure for the majority of businesses; 9pm overnight curfew through March 30.

Puerto Rico Secretary of State Elmer Román said at a press conference on Monday that no one is allowed to go to the beach.

On Sunday, Gov. Wanda Vázquez ordered a two-week closure of nonessential government offices and commercial businesses except for gas stations and those in the food, health and finance sectors. Puerto Rico also cancelled major events, including an Ironman race scheduled for this past weekend.

Charleston banned gatherings of more than 50 people outside of stores and private offices.

Columbia restricted businesses to no more than half their legal occupancy and won’t allow more than six people to sit at a restaurant table.

No current plans to close restaurants or bars.

South Dakota public universities announced on Monday that all classes will move online next week after an extended spring break.

All bars closed in Nashville; restuarants ordered to operate at no more than 50 per cent capacity. 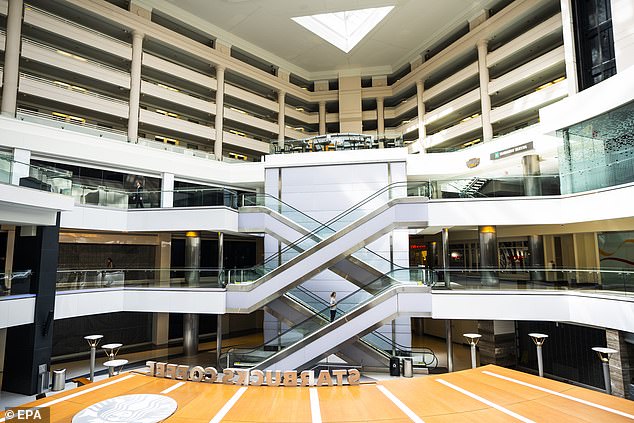 Shoppers are sparse at Chevy Chase Pavilion, a shopping mall in Washington, DC 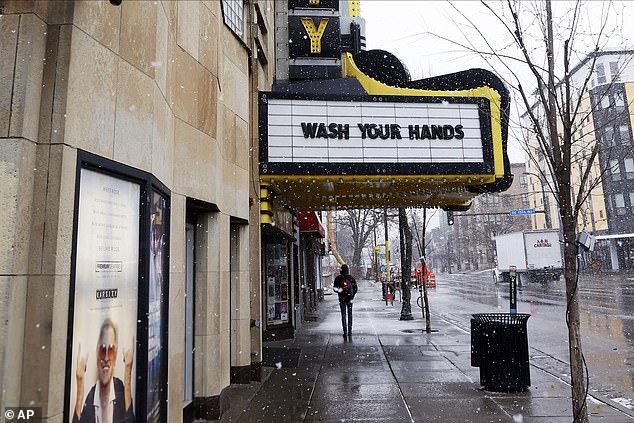 The Varsity Theater, home to concerts, used the marquee to address the need for washing hands near the University of Minnesota in Minneapolis

All public schools closed for at least three weeks from Wednesday

Dine in customers banned at restaurants and bars 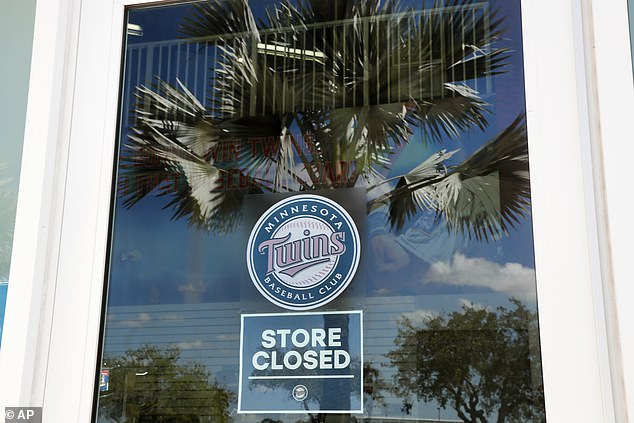