Home » ‘They will hear from the US’: diplomats to challenge countries lagging on climate

Washington: US Secretary of State Antony Blinken called on American diplomats around the world to challenge nations whose actions set back efforts to address climate change, according to prepared remarks.

Blinken delivered his first address on climate change in Annapolis, Maryland on Monday (Tuesday AEDT) ahead of a US-hosted virtual summit this week. 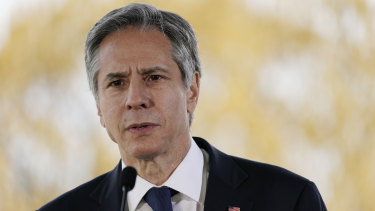 Secretary of State Antony Blinken: US diplomats to make the case about climate change to laggard nations.Credit:AP

President Joe Biden has invited 40 world leaders to discuss new measures they’ll take to strengthen commitments they made to reduce emissions under the Paris climate agreement in a bid to signal that he is prioritising the issue and trying to rally global action early in his administration.

“Our diplomats will challenge the practices of countries whose action – or inaction – is setting the world back,” Blinken said.

“When countries continue to rely on coal for a significant amount of their energy, or invest in new coal factories, or allow for massive deforestation, they will hear from the United States and our partners about how harmful these actions are.”

Australia’s ambassador to the US Arthur Sinodinos told The Age and Sydney Morning Herald last week that he had discussions with John Kerry, in which he briefed the US climate envoy on the domestic issue of the “climate wars”. Sinodinos has explained why Australia has taken “the approach we have to climate change and why policies such as carbon pricing and carbon taxation have fallen by the wayside”.

Blinken said the Biden administration would put the climate crisis at the centre of its foreign policy, but that would not mean treating countries’ progress on climate “as a chip they can use to excuse bad behavior.”

He did not refer to a specific country, but human rights activists have expressed concerns that the administration’s desire to cooperate with China on reducing emissions could mean concerns over China’s oppressive policies are overlooked.

The United States would also increase the amount of aid it sends to the world’s most climate-vulnerable countries, such as low-lying island nations, Blinken said, adding that in 2020 they only received 3 per cent of international climate finance.

“We’ve got to fix that,” he said, adding that Washington is deploying experts to these countries to build early warning systems and prepare infrastructure for the changing climate.

Hancock stars in an entirely different video to announce resignation

Killer is sentenced to death for fatally stabbing 19 disabled people