This is the hilarious moment a father helps his young son practice his goalkeeping skills, only for the child to dive the wrong way in dramatic style.

Author Barlow Adams, from Cincinnati, Ohio, filmed himself playing football with his son.

In the video, Barlow’s son is seen standing in front of a fence facing towards the camera as he prepares to try and save a penalty. 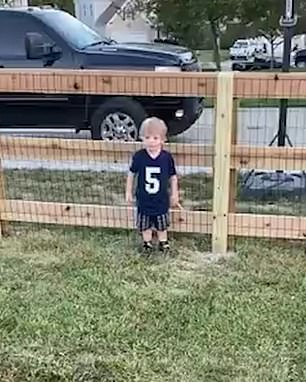 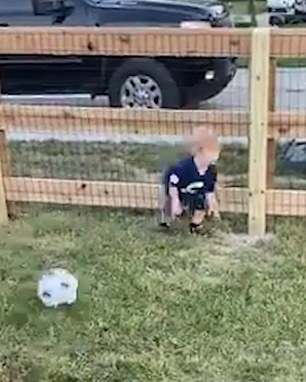 Author Barlow Adams, from Cincinnati, Ohio, kicks a football towards his son who prepares himself to save the attempt

The father-of-three then kicks the ball to his son’s right hand side, making sure that the attempt was easy enough for his son to have a chance of saving it.

However, after it’s clear which direction the ball is travelling, Barlow’s son dramatically throws himself in the opposite direction to the ball.

His son throws his arms up high as if reaching out to make a finger-tip save.

Barlow can be heard laughing at the sight of his son’s attempted save.

The video was shared on Twitter by Barlow on September 26 and has been liked more than 101,000 times and has also been retweeted more than 13,000 times.

Seeing the funny side of his son’s attempted save, alongside the video, Barlow posted the caption: ‘Things are still hard. The world is still insane.

‘But none of that will matter soon because my son is going to be an international soccer star and buy us a new life.’

Councils are slammed for handing out record number of 'petty' Asbos