Washington: US President Donald Trump has announced he will invoke emergency powers to marshal critical medical supplies against a coronavirus pandemic threatening to overwhelm hospitals and other treatment centres, as the United States confronts twin health and economic crises. 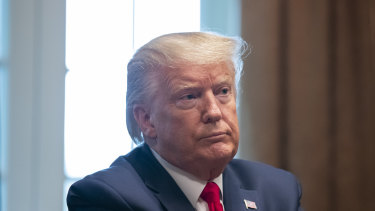 US President Donald Trump listens about the coronavirus in the Cabinet Room of the White House.Credit:AP

The Senate acted on the economic front, approving legislation to guarantee sick leave to workers sickened by the disease.

Trump on Wednesday described himself as a "wartime president" as virus cases surged and the markets fell, and he took a series of extraordinary steps to steady a battered nation, its day-to-day life fundamentally altered.

Most immediately, Trump said he would employ the Defence Production Act as needed, giving the government more power to steer production by private companies and try to overcome shortages in masks, ventilators and other supplies.

Trump also said he will expand the nation's testing capacity and deploy a Navy hospital ship to New York City, which is rapidly becoming an epicentre of the pandemic, and another such ship to the US west coast.

The Housing and Urban Development Department will suspend foreclosures and evictions through April. A growing number of Americans face losing jobs and missing rent and mortgage payments.

But as Trump laid out efforts to steady the economy, the markets plummeted. Gone were the last of the gains that the Dow Jones Industrial Average had made since Trump took office.

Administration announcements came on a fast-moving day of developments across the nation's capital, its empty streets standing in contrast to the whirlwind of activity inside the grand spaces of the White House and the Capitol.

The Senate overwhelming passed a second coronavirus response bill, sending it to Trump to enact with his signature. The vote was a lopsided 90-8 despite worries by many Republicans about a temporary new employer mandate to provide sick leave to workers who get COVID-19. The measure is also aimed at making diagnostic tests for the virus free. 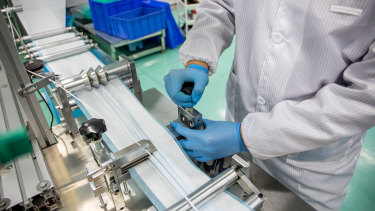 A worker operates a machine on the protective mask production line at the Mask Factory facility in Hong Kong, China.Credit:Bloomberg

Trump dismissed talk from his own treasury secretary, Steven Mnuchin, who suggested that the nation could face 20 per cent unemployment at least in the short term.

The administration has told Americans to avoid groups of more than 10 people and the elderly to stay home while a pointed reminder was given to millennials to follow the guidelines and avoid social gatherings.

Trump likened the effort to the measures taken during World War II and said it would require national "sacrifice".

No longer able to run for re-election on a healthy economy, he was taking on the mantle of a wartime leader after played down the severity of the crisis for weeks.

The president also continued his recent habit of referring to the coronavirus as the "Chinese virus", which has been sharply criticised as racist.

Thousands infected with zoonosis disease after factory leak in China

Price of New Zealand wine is set to fall

What is moonshine and why is it illegal?