Washington: A pregnant woman in the US gave birth in a Tesla after her husband put the car on autopilot to drive them to hospital in Philadelphia.

Keating Sherry, 34, was forced to act quickly when it became clear that his wife, Yiran, 33, was on the point of giving birth in September. 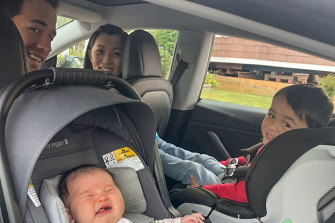 The whole family. Baby Maeve Lily Sherry was born in a car on autopilot.

Mrs Sherry’s contractions had begun the night before, but she did not believe the birth was imminent and went about her normal routine.

“I said to Keating: ‘Today’s the day, but I don’t think it’s happening anytime soon,’” she told The Philadelphia Inquirer.

Rafa, the couple’s three-year-old son, was put into the back seat in readiness for the trip to pre-school.

Mr Sherry went back to check on his wife who was in severe discomfort as the contractions intensified. 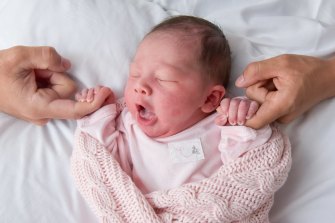 Maeve Lily Sherry was born in a Tesla car on autopilot. Credit:Facebook

She crouched on the floor in front of the passenger seat, and Mr Keating prepared to rush his pregnant wife to hospital, which in normal traffic would have been 20 minutes away. But in the rush hour the journey was likely to take far longer.

With traffic not moving, Mr Sherry set the car’s navigation system to take them to the hospital in the suburb of Paoli and trusted the Tesla’s advanced driving features – relying on sensors and radar to avoid collisions – to do the rest.

Keeping one hand on the wheel, Mr Sherry tended to his wife, squeezing her hand as the car inched its way to its destination.

Then, as they arrived, Mrs Sherry whispered: “Oh, my God, Keating. She’s out.”

Fortunately, a paediatrician happened to be passing by, who summoned nurses who cut the umbilical cord on the car’s front seat.

“Once the paediatrician said, ‘She’s healthy. Congratulations,’ that was quite the sigh of relief,” Mr Sherry added.

The birth was regarded as something of a novelty by nurses who flocked to see the “Tesla baby”, who was named Maeve Lily.

Her safe arrival was testimony to Tesla’s autopilot mode, which has generated controversy after a series of accidents in which drivers have left the car to drive itself.

The company insists the autopilot technology is intended only to help the driver, who should always remain in control of the car.

One million stimulus checks went to the DEAD