A maintenance worker at Disneyland Paris has tested positive for coronavirus, the theme park said today.

However, the park will remain open with hand gel provided to visitors and guests told to keep their distance in the queue for rides, French media said.

Disneyland staff are now checking on colleagues who had been in contact with the infected worker, who tested positive over the weekend.

According to BFMTV, Disneyland insisted that the infected person had worked ‘behind the scenes’ and was ‘not in contact’ with visitors to the park. 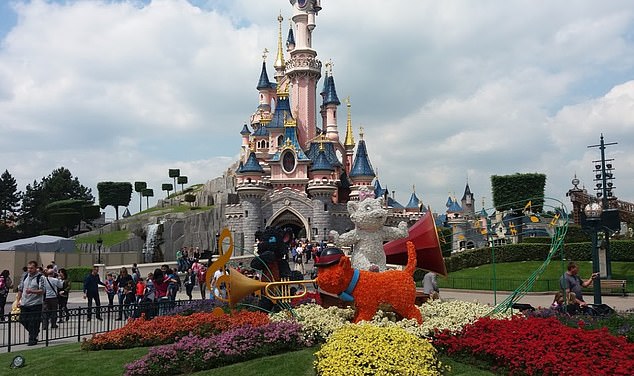 According to Le Parisien, three people have been ordered into quarantine so far after apparently coming into contact with the worker.

The employee was a night-shift worker who did not meet guests and had been on sick leave for several days before testing positive, the park said.

A Disneyland spokesman told French media that the park was making supplies of alcoholic hand gel available to guests today.

In addition, park authorities will try to keep tourists a safe distance apart when they queue up for rides.

Tokyo Disneyland was previously shut down over virus fears in Japan, while the park in Shanghai was closed as long ago as January 25 but is now set to partially re-open.

Walt Disney World in Florida has said it is implementing ‘preventive measures’ including easy access to hand sanitisers and clearly-defined cleaning routines.

Disneyland Paris, which is around 20 miles east of the city centre and receives 15million visitors a year, has remained open despite a French ban on gatherings of more than 1,000 people.

The new restrictions are being applied nationwide after they were previously announced in virus hotspots, health minister Olivier Veran said at the weekend.

‘The priority is to do all we can to slow the transmission of the virus,’ he said.

The government had already banned gatherings of more than 5,000 people in confined venues.

Sport was also affected with PSG’s match at Strasbourg postponed on Saturday, as well as the women’s Six Nations game between Scotland and France. 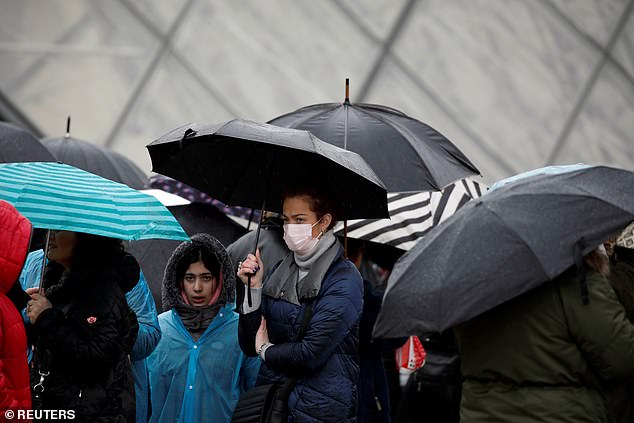 ‘We are still in the second stage, meaning that our priority is to do everything to slow the spread of the virus in our national territory,’ health minister Veran said.

Visitors to Paris have been turned away from the Louvre art gallery, but the Eiffel Tower has remained open.

However, the Eiffel Tower is only accepting payments by bank card, amid fears that the virus could be passed on by handling cash.

France has confirmed more than 1,200 cases of the virus, with 19 deaths in Europe’s largest outbreak outside Italy.

Finance minister Bruno Le Maire said today that Europe needs a ‘massive’ economic stimulus plan to cope with the impact of the outbreak.

France and Italy have been leading calls to loosen European budget rules to cope with the economic impact.

The European Commission told Italy on Saturday that its planned extra spending in response to the outbreak would not be counted in measuring its compliance.

Italy has placed 16million people in lockdown in the most drastic anti-coronavirus measures seen so far outside China.

China the ONLY major country in the world whose GDP will grow in 2020 as coronavirus collapses world economy, says IMF