The world’s leading meat processing company has denied buying cattle from an Amazonian businessman implicated in the murder of nine peasant farmers.

In April 2017, nine peasants who had been squatting on farmland in a remote area of the Amazon, were set upon by four hooded gunmen in the remote Brazilian state of Mato Grosso.

Some were hacked to death with machetes while others were executed with a 12-gauge shotgun.

Authorities suspect the nine victims were tortured before death after two were discovered decapitated and the rest tied up.

In May 2017, prosecutors charged Valdelir João de Souza – a local business owner and farmer – of murder along with four other individuals. The five men were also accused of forming an illegal paramilitary unit. 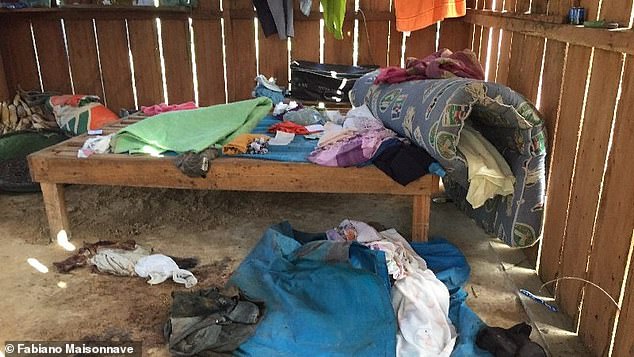 Pictured: House of one of the squatters, who was also an evangelical pastor, Sebastião de Souza, in Taquarussu do Norte, Brazil after his body was found on the floor with a machete in the neck in 2017

Authorities pinned de Souza as the mastermind of the executions in what became known as the ‘Colniza massacre’.

The victims had been trespassing on the land neighbouring de Souza’s two timber farms.

De Souza went on the run after he was charged but resurfaced a year later in April 2018, as the landowner for two plots of land in the adjacent Rondonia state.

According to government records, in May 2018, 143 cows were sold from de Souza’s farms to one owned by Maurício Narde.

Moments later, 143 cattle were sold on to a JBS meatpacker.

De Souza responded to the allegations against him in a 2019 interview with Gazeta Digital, where he claimed he was innocent and had no part to do with the massacre.

He said that he remained a fugitive, fearing retaliation from the real killers. 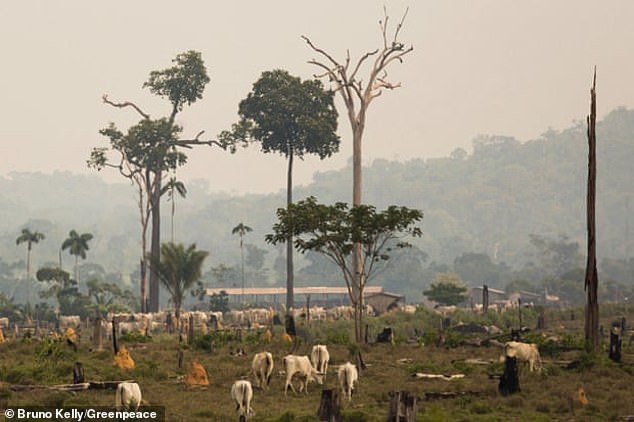 Pictured: A cattle ranch in the Amazon. De Souza responded to the allegations against him in a 2019 interview with Gazeta Digital, where he claimed he was innocent and had no part to do with the massacre

‘I never went around armed, so why at my age of 41, with solid companies, a peaceful life, no debts, without any problems, would I do something so barbaric?’ de Souza said in the interview. ‘I built everything with the honesty and effort of my family. Why would I throw it all away?’

JBS told Réporter Brasil that de Souza had never supplied them with cattle and that the company does not ‘acquire cattle from farms involved in deforestation of native forests, invasion of indigenous reserves of conservation, rural violence, land conflicts, or that used slave or child labour’.

‘JBS reiterates that any attempt to link the company to the person mentioned in the report, who was never on its list of suppliers, is irresponsible,’ the company told the Guardian.

According to the Guardian, JBS has often been accused of being linked to illegal deforestation and unlawful agriculture practices.

They reported last month that pressure was mounting from Brazilian politicians and environmentalists to address information gaps in their supply chain.

‘These facts are serious and they should be investigated rigorously,’

The rapid sale of the cattle from de Souza’s farm to Narde’s is what environmentalists call ‘cattle laundering’, where animals from locations with illegal practices send them on to ‘clean’ farms to be sold on to meatpackers without questions being asked.